Chris wasn’t able to participate so I recently took a solo cruise from Seattle (USA) to Alaska and ending in Vancouver (Canada). This post provides a summary of the cruise and further posts will link to the following ports of call in due course:

Following 3 nights in Seattle I was excited to be boarding the Norwegian Jewel for my second ocean cruise (after my first cruise in November 2016 in South America). I joined the other 2000-odd passengers in a lengthy queue at the port terminal building as we waited to get our documentation checked and bags scanned to enable us to receive our cabin key card ready to board the ship.

As soon as I embarked I set about exploring while myself and my fellow passengers had to wait for our cabins to be ready. The cost of the cruise included all food so following an initial look around I headed to the main deck 12 buffet for lunch. As with my previous cruise there was a huge array of fresh and delicious food including snacks and sandwiches, pizza, pasta, curries, salads, hot and cold dishes, tropical fruit and desserts. Yummmm….

At around 2 pm the loudspeaker announced that all cabins were ready. The cases we had left at the port terminal before joining the arrivals queue were gradually being deposited outside each cabin door. As with my South American cruise in 2016 I had opted for a basic level inside cabin to enable the £500 or so savings made on a balcony cabin to allow for a few excursions.

One of the best things about an inside cabin is they are pitch black and in both of my experiences have almost zero noise levels (save for the faint background humming of the ship’s engine) which enables excellent sleep at night!

As I was exploring the ship I came across the gym on deck 12. Use of the gym equipment was including in the cruise price together with a limited number of classes, for example, morning stretch class. For an additional $69 for the cruise duration I signed up for a full gym pass which included unlimited specialised classes such as yoga, pilates, TRX suspension training and cycling classes.

There were several such gym classes each day and throughout the cruise I attended at least one specialised class a day as well as attending some of the free ones and spending several hours in the gym. During the cruise as I pummelled the treadmill looking out of the huge floor to ceiling windows I saw whales, dolphins, sea otters and the little noses of other sea creatures (probably seals) poke out of the water from time to time.

In addition to the gym, during the two ‘at sea’ days there were plenty of activities which kept me fully occupied. For example, I participated in a painting class (as above) and the result is below…

During the cruise I attended two of many different dance classes available; one was ’70’s line dancing’ as above and the other was ‘salsa line dancing’. Rather than being country music, the 70’s line dancing (above) was to ‘Staying Alive’ which was fun!

As mentioned, with the exception of ‘speciality restaurants’ where you pay a premium if you wish to dine there, the rest of the food was included in the cruise price. All of the food was excellent so I personally wouldn’t see the advantage of paying any such premium.

There were two huge a la carte restaurants, an asian restaurant, a large buffet restaurant and more to choose from with food available 24 hours a day. During the short times the restaurants were closed there was snack bars and areas available. The food was always fresh and delicious with huge varieties. 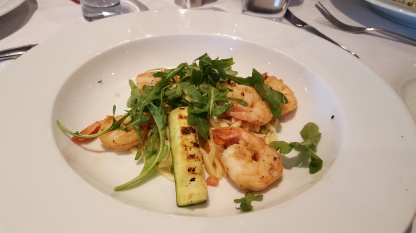 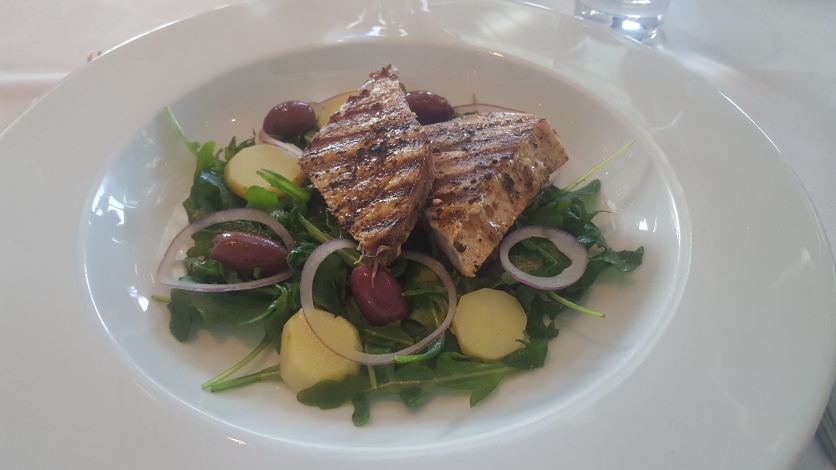 Every night a programme of events for the following day was left in each cabin. For solo travellers such as myself, there was a solo meet up at 6 pm every evening. I attended these each night as it was a good way to get to know fellow solo travellers and have people to share meals, evening entertainment and to catch up on the day’s events with.

All day and every evening there was a huge range of cruise activities from which to choose, for example:

With so many activities on offer there was little time to get bored on the ship. On this particular cruise there was only two ‘at sea’ days with the other 7 being port days. The two ‘at sea’ days were times when the ship was sailing both to and from Alaska where we mostly saw just the ocean.

Previously sailing around the very south of South America through fjords and passages there was always stunning scenery to see. Sailing around Alaska was very similar as again, we sailed through channels with snow capped peaks and glaciers on each side and this time I saw ice bergs.

I’m not sure if this applies to all cruise companies (presumably it does) but NCL excursions are outrageously expensive and don’t represent value for money. My individual posts will cover the details on ports of call and excursions however knowing I would be travelling solo and wanting to mix with other people I sucked up the cost and booked 4 x trekking excursions. These 4 excursions alone were around £80 each and only lasted about 3 hours each.

A few notes on solo cruising

Solo cruising isn’t cheap and incurs a single supplement of around £500 for sole use of the cheapest inside cabin.

One issue… I’m sitting in the pleasant Spinnaker bar on the top deck all nice and comfy with my book and my laptop… but how to get a drink without losing my table??? As I didn’t have anyone to stay at the table to look after my seat or laptop I had to wait for a server to walk past so I can flag them down… nobody went past for quite a few minutes… ho hum… if I got up, I would have to pack up my stuff, go to the bar, get a drink and return to find there is no table available…

After a short while I relocated to O’Sheehan’s bar, a lively bar with an Irish theme, got myself a delicious margarita before I sat down and re-opened my book… this small issue applied every time I had breakfast or lunch at the large buffet on deck 12. This was often packed and tables were snapped up as soon as they were vacated, especially those nearest the food. This usually meant balancing everything I was going to eat or drink in one go or ensuring I had a jacket to leave on the back of the chair and something to leave on the table to show it was occupied!

Other than the additional single supplement cost and the small issue of seating, I didn’t feel at all lonely as a solo cruise passenger. I got to know the same people attending gym classes, met a range of people on the 4 excursions I had booked, had fun at the painting and dance classes and got to know different solo travellers to share meals with each evening. I would therefore not hesitate to book a solo cruise in the future!