One of the highlights of our South American cruise was sailing through the Beagle Channel along the ‘Avenue of Glaciers’. We were fortunate that the weather was so good as we had incredible views of each of the six glaciers along the channel.

The Beagle Channel is named after HMS Beagle which sailed the Beagle Channel in 1833 captained by Robert Fitzroy. Charles Darwin was also on board so that he could scientifically map the channel. The Channel forms a natural border between Chile and Argentina. 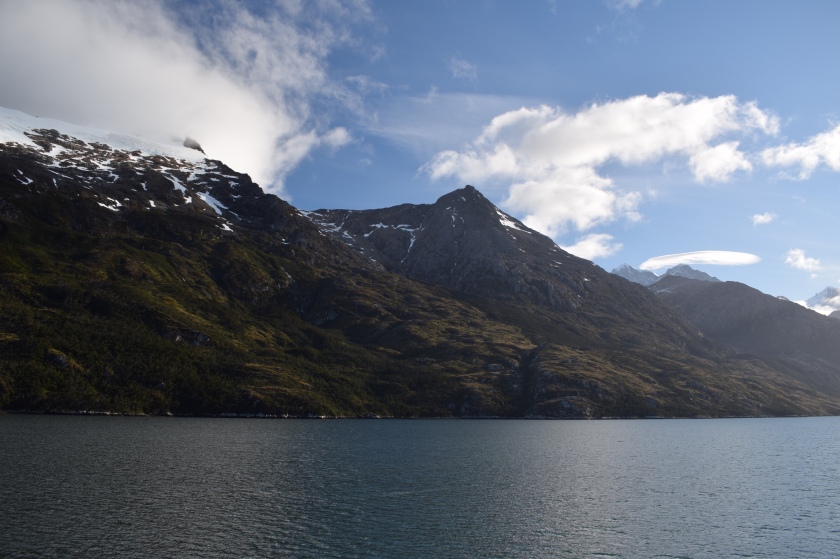 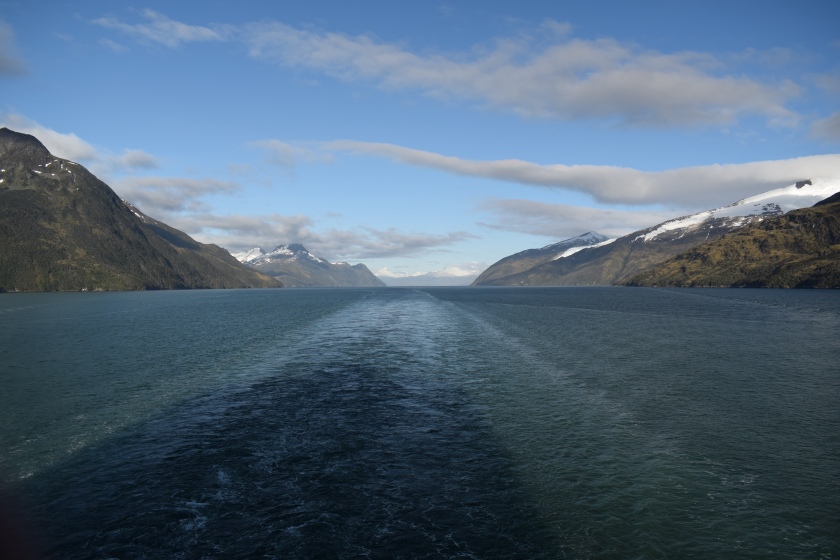 Tucked away down at the far south of Argentina and indeed South America, Ushuaia is considered to be the World’s most southern city. Ushuaia is the usual gateway to Antartica for those who can afford the high cost of travelling to the Earth’s coldest and southernmost continent. For us this conjured up images of freezing cold snow and ice! We were surprised however to find that according to Wikitravel, Ushuaia is only as far south as Belfast is north!

Due to various geological factors the weather doesn’t usually reach more than 12 degrees even in the summer. The highest recorded temperature is 20 degrees and the lowest is -20 degrees. We were fortunate that despite the cloudy forecast we had perfect clear blue skies and relatively warm temperatures of around 10 degrees for our day in Ushuaia.

Ushuaia is nicknamed ‘El Fin Del Mundo’ which means End of the World and is located in a wide bay with the Beagle Channel to the south.

Following our trip to the Tierra del Fuego National Park (below) we had a walk around Ushuaia and a coffee. The town had bright colourful houses and an easy-going and friendly feel about it.

The Tierra del Fuego National Park was was created in 1960 and is located at the very southern tip of the Andes right down to the Beagle Channel. As mentioned in a national park leaflet we were given it is thought that people first occupied the Tierra del Fuego archipelago around 10,000 years ago. These people were called ‘Yamana’. They used canoes to move around (we saw one in the museum in Punta Arenas) and hunted sea lions. The Yamana people became extinct around the 1800’s which coincided shortly after the arrival of the first Europeans. It is thought that the reason for their disappearance was due to disease although there is also evidence to suggest they were hunted down by explorers.

The entrance to the national park is 20 km from Ushuaia. The ship had an excursion for $150 per person however we teamed up with Derek and Kath, a lovely and fun couple from Newcastle and took the offer from a local taxi driver of $120 to take the four of us on a trip through the park. The entrance cost was $15 each so we had a personal taxi tour which stopped at all of the same ship excursion viewpoints and without waiting for 50 odd people to get on and off the bus each time for only $45 each! Result!

We had a wonderful time being driven around the highlights and best viewpoints of the national park. We were a tad envious of the people who were there trekking… it would be good to spend a couple of days at least to explore the park on foot as there are fabulous hiking trails which criss cross around this beautiful park.

While his English was limited we had a great taxi driver… He took us to all of the views as promised and then stopped at a bonus place… He showed us a dam in the river which had been built by beavers!