Chris and I recently celebrated our 8th wedding anniversary in the lush and tropical paradise island of Grenada and to mark the occasion we this time stayed in a top class all inclusive resort.

We have separate posts on our trip to Grenada’s capital St George’s and our island road trip so this post will focus on our experiences of spending a week of indulgence in Sandals Grenada.

We got married in Sandals Whitehouse Jamaica in 2010 so we had a good idea of what to expect… an adults only mix made up almost exclusively of couples; from young and not-so-young honeymooners, those celebrating anniversaries and special birthdays and those who were after some quality couple time.

Including our weddingmoon as mentioned above this is the second 5* all inclusive holiday that Chris and I have taken in 8 years of fairly extensive travel most of which has been organised fully independently by ourselves and consisted of all manner of accommodations from tents, barns, hostels, home stays and upwards, so this was definitely in the ‘big treat’ bracket for us!

Sandals Grenada is literally next to the airport so after a slow and lengthy immigration queue it was wonderful to be whisked away in the small air conditioned mini bus to be greeted 5 minutes later with a glass of champagne each.

By now it was around 6 pm and the sun had just set in a breathtakingly deep red sky speckled with little pink fluffy clouds. Following our swift check-in we were taken to our room and shown the various features. Just as the porter was leaving, our cases swiftly followed. And no tipping is necessary as tips are included in the overall price 🙂

Our room was huge and comfortable and we excitedly explored features we are not used to being particularly impressed with the 3 X USB ports on each bedside cabinet meaning multiple devices are conveniently on hand while they’re charging!

Equally impressive was the free bar complete with a bottle of chilled Chardonnay in the fridge, next to the cold beers. And the large easy-to-use safe… and the outside bath on the balcony! Yes indeed… the balcony contained a huge open air bath tub!

We had arrived on Halloween so by the time we had a quick shower and changed from our UK travelling attire into something cooler we were ready for dinner. Pumpkins and giant spider webs were dotted around all over the place! 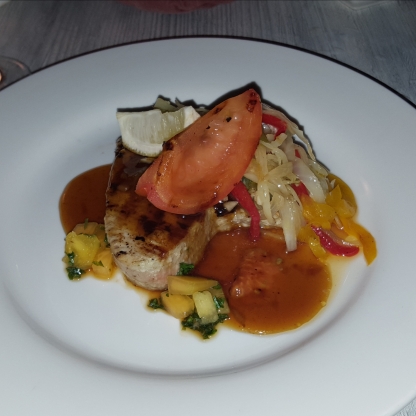 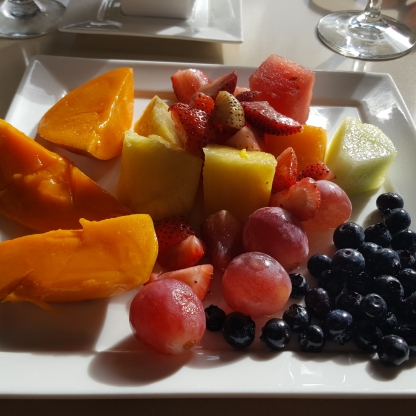 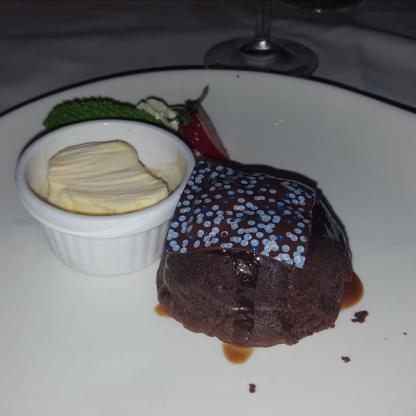 We had a choice of several a la carte restaurants and chose ‘Spices’ for our first Sandals meal. We were seated outside on a large upstairs balcony and selected our choices from the delicious menu. We began with a ‘signature cocktail of the day’ each before tucking into the first fabulous 3 course meal of the week, washed down with a never ending supply of Chardonnay. Above is a selection of some of the mouthwatering dishes we enjoyed throughout the week… 1: curry vegetable parcel; 2: tuna steak; 3: tropical fruit for breakfast; 4: warm chocolate brownie 🙂

Due to being transported back in time by 4 hours the previous day, we awoke early and so decided to explore the resort at 6 am which was lovely and tranquil at that time. Within an hour we had located the beach, various swimming pools, the gym and happened to be at the coffee shop (aka the ‘Cafe de Paris’) when it opened at 7 am.

Breakfast was delicious and included a mouthwatering array of tropical fruit as well as a range of continental and hot breakfast dishes. We were served unlimited bucks fizz each morning too!

We had a productive first day which was mostly spent drinking cocktails and eating. And snorkelling. Pink Gin beach was fairly small and man made rock jetties ensured the sea was nothing more than a little ripple. There was a surprising amount of fish which were easy to see in the clear water. 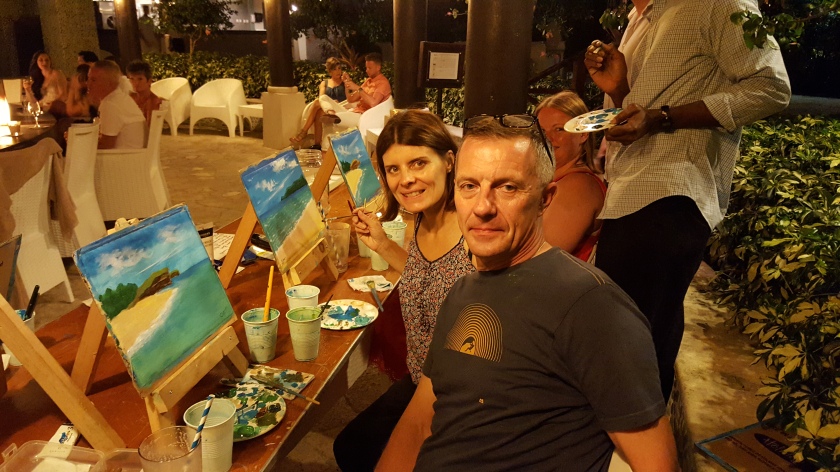 We were pleased to find a painting class which we both previously enjoyed when we did something similar on our South American cruise. We felt at $US25 each the cost was fairly reasonable. However we just had to be careful to get the correct receptacle for the sipping and not accidentally pick up the cup we had been dipping our paint brushes into!

Evenings such as this were great opportunities to meet other couples and we did meet some lovely people. Once we got to know them, it was good to catch up again at breakfast or around the resort or beach at other times. The majority of couples were from the US, with a few from Canada and a few from the UK.

For those couples with a higher budget than us, the conversation usually extended to which sun beds their butler had reserved for them or to which restaurant butler was going to escort them. When the bar staff walk around the beach and pools all day serving you drinks straight to your sun bed, regardless of which ‘category’ of Sandals guest you are, this did seem a little extravagant although the butler thing keeps plenty of local Grenadian’s employed!

By the middle of day 2 we were starting to feel restless and as we sat scoffing pizzas in the 10 minutes we had sat beside one of the pools we started to make a few plans for the rest of the week.

Not quite ready to spend a full day in the resort, after our little excursion in the car, we decided to go for a beach walk the following day. Due to the jagged headlands we couldn’t walk along the beach in order to get to the next beach, so we had to take the road. With Sandals being at the end of a peninsula just past the airport, this was an extremely quiet road!

Grenada is generally a safe island and unlike Sandals Whitehouse Jamaica doesn’t have guards at either end of the beach. Other than the 30 degree heat we felt comfortable as we walked along the quiet road towards the long strip of white palm fringed beaches.

We found a restaurant called ‘Aquarium’ on Google maps and walked down a steep road to reach this beachfront place. We had anticipated a drink and entrance to the beach. Unfortunately this wasn’t going to happen; the restaurant was a building site! Workmen explained it was being refurbished, however they kindly allowed us to step over nails and pieces of wood and walk straight out onto Magazine beach (above). Wow! This was well worth the short trek as it was stunning.

There are several miles of beaches along this stretch of Grenada including the well known and most popular Grande Anse beach which itself is 2 miles long and stretches along towards St George’s. We stayed at Magazine beach for a short time but the sea was unusually choppy and we could feel strong under currents. This beach usually has practically no waves and would have been good for more snorkelling!

Our next little escape the following day was to St George’s, Grenada’s colourful capital which again is to be covered by a separate up-and-coming post.

With the exception of the steak house we tried most of the superb restaurants throughout the week. One evening, Sandals did a ‘beach party’ with a delicious buffet and Caribbean fire eating style entertainment.

As we are now classed as ‘return guests’ we were invited to a drinks reception, a special dinner and were given a free bottle of rum. Guests who have spent 70 nights at any Sandals are entitled to a free 7 night stay and it was incredible that some people have actually spent over 200 nights in various Sandals!

We sat with several other couples at both of these evenings, so, as mentioned above it was a great opportunity to meet others. Even if they are “considerably richer than you‘…

We were impressed that the Sandals company has banned plastic straws and were providing paper straws in multi use plastic cups around the pools and beach. Filtered drinking water was provided from jugs at all restaurants although it would be great if this was also provided in the rooms instead of plastic bottles of water being left in our fridge.

Perfect for a wonderful and relaxing celebration treat once in a while!