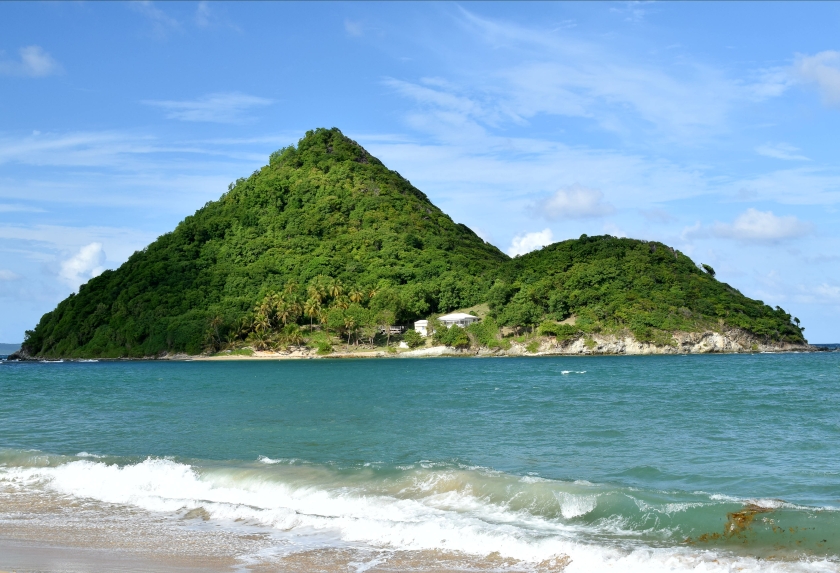 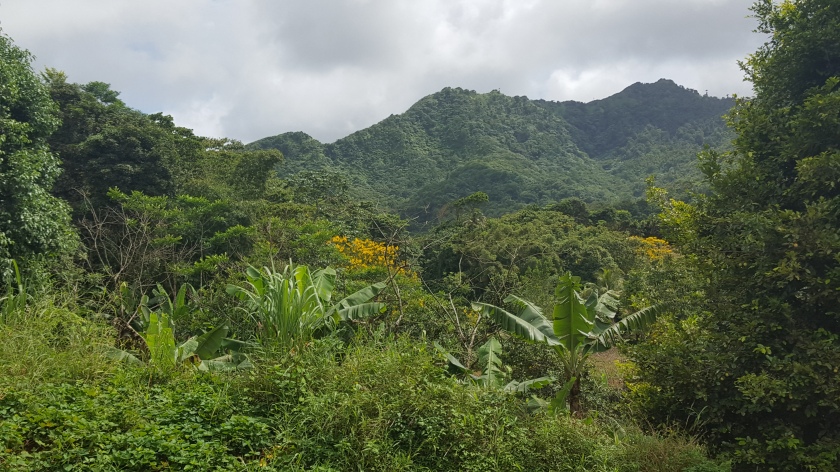 Located in the far in the south of the Caribbean, and as a producer and global exporter of an abundance of spices such as nutmeg and cinnamon, Grenada is known as the ‘Spice Island’. With its southerly location Grenada is fortunate to often miss hurricanes, although its’ the last major hurricane, Hurricane Ivan, caused devastation in 2004. Grenada gained independence from the British in 1974.

From our resort in the south west near St Georges we took the mountain road diagonally through the centre of the island towards the Grand Etang National Park. For a small entrance fee of $US2 each we drove the car to a small car park next to Grand Etang Lake, a national heritage site. The car park, lake and surrounding area was deserted although several hiking trails start from this point. The lakeside contains Chinese pavilions which were given to Grenada as a gift from China. 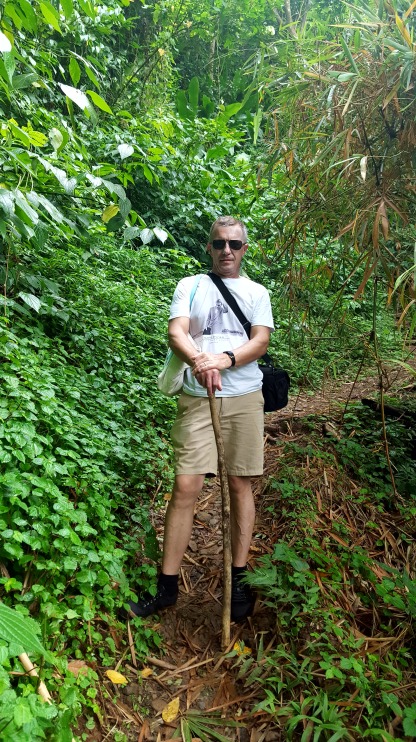 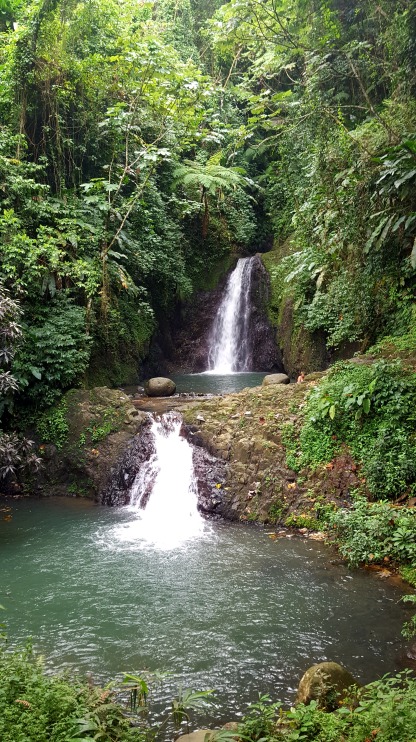 Our next stop was at the Seven Sisters Waterfall. We hadn’t realised this would involve a 30 minute trek each way through steep and muddy jungle paths and hadn’t really come prepared. We decided to go ahead anyway and rather than walking boots, which would be recommended, I did this little trek in sandals with Chris carrying our beach bag!

We passed a woman who had hired a guide but this isn’t necessary… there is only one path and a few other tourists were making this trek so you can’t really go wrong. The path is however quite slippery so it would be a bit tricky if you have a walking disability.

The waterfalls were pretty and you can bathe in the pools if you wish to cool down. In our view it was worth the 30 minute trek to get there. 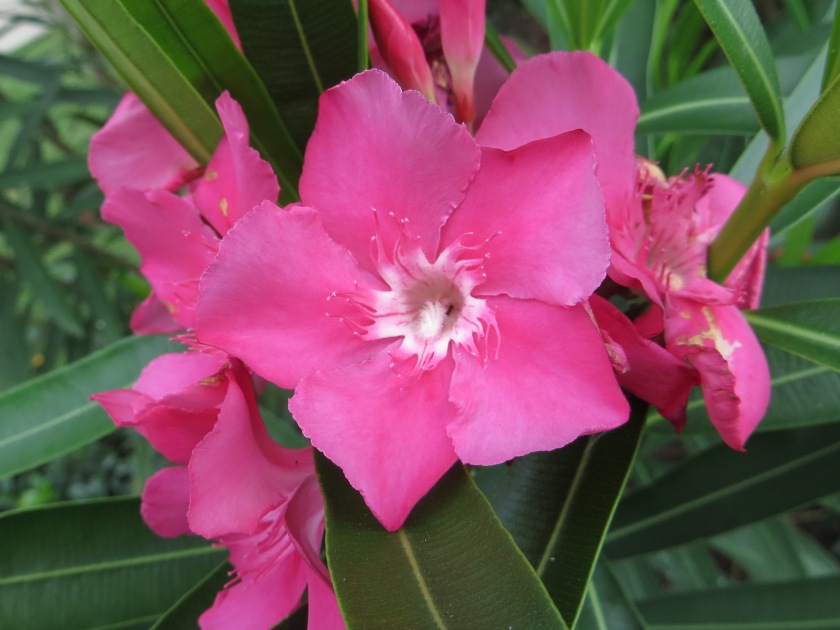 Once we had finished at the waterfalls we made our way back to the car and continued driving to the other side of the island until we arrived at the east coast, edged by the Atlantic Ocean.

We had a delicious Greek meze lunch in ‘By The Sea‘ a lovely restaurant near the small town of Grenville. This restaurant was right on the coast, next to the estuary and it was most pleasant to sit outside on the decking.

We continued to the far north of the island, to Levera National Park where we parked the car and had a wander along the beach. Tiny islands are dotted on the horizon including Sugar Loaf island, as above.

Having done some litter picking in Norfolk in the UK recently the concept of a beautiful clean pristine beach is at the forefront of our minds and its now difficult not to stop and pick up litter on beaches… we gathered a small amount of plastic from this wild and windswept beach and put it in the bin.

We were impressed however that generally Grenada was very clean and we noticed hardly any litter as we drove around. 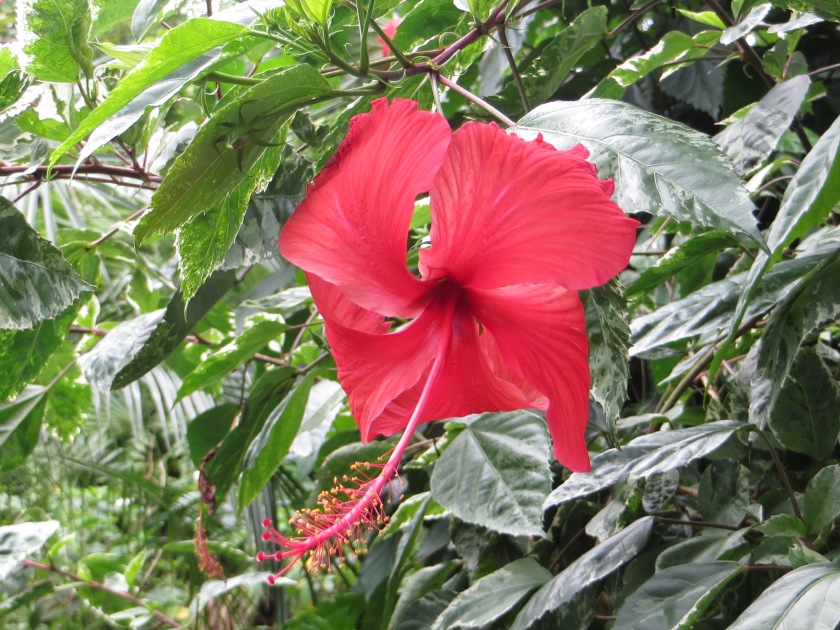 Grenada is a fairly small island but being mountainous it takes a long time to get around! We were by now at the far north east side of the island about as far as you can get from the south west where we were staying. We made our way along the top of the island to the west coast and took the scenic west coast road for our two hour drive back!

Hiring a car for a day was a good way of getting an overview of Grenada and something we would recommend doing. Driving was on the left and the main hazards were the people who wander along the side of the road where there is an absence of any pavements.  Local Grenadians are laid back drivers although in more in a hurry to get around than we were meaning we regularly pulled over to let them past!