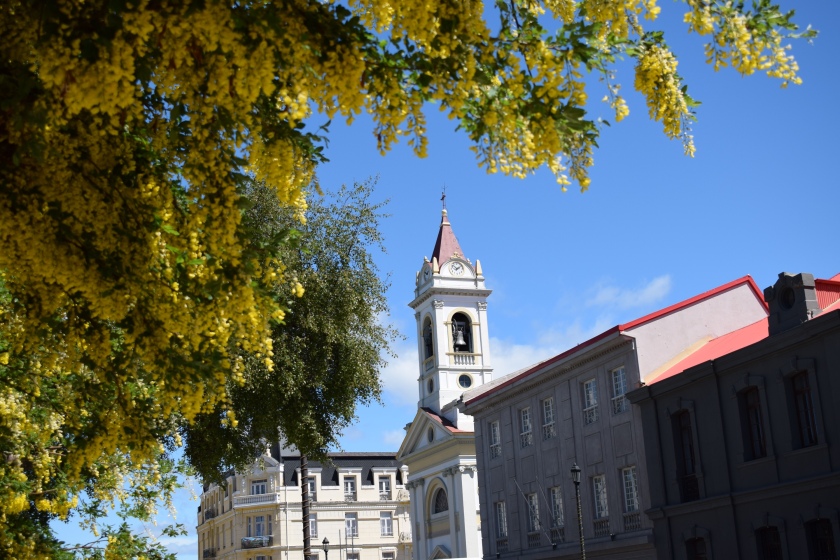 Today the ship was able to dock in the port of Punta Arenas without the need for tender boats. We were pleased about this until we read (in the daily newsletter provided to each cabin) that to reach the main square of the town would incur a $15 per person bus ride! Grrrr….. another ‘hidden’ cost to what we thought would be a cost effective way of exploring the south of South America!

According to ‘Freestyle Daily’ the ships’ newsletter as mentioned above, Punta Arenas is also known as ‘Sandy Point’ and is the southernmost city of Chile’s southernmost region called ‘Magallanes’.

We walked around the colourful ‘Plaza de Armas’ central square with its yellow blossomed trees and found a coffee shop where we had our first access to wifi in two days! Unsurprisingly several other cruise passengers, with phones and iPads in hand made a beeline for the coffee shop too!

We visited the ‘Centro Cultural Braun Menendez’ museum which was free to enter. All of the exhibit information was in Spanish however we were given a guide in English.

The museum contained many historical exhibits such as the bones of now extinct animals that once lived in this area of South America. The museum guide provided an explanation of the Spanish and Portuguese who ‘discovered’ routes around the tip of South America in their search for new routes to India and the East.

Eventually it was the Netherlands who created a company called the East India Company in 1602 which resulted in a monopoly for Flemish sailors. According to the guide this developed into a highly profitable trade of textiles and manufacturing.

The museum was well worth a visit which provided an interesting history of the local area and town of Punta Arenas.