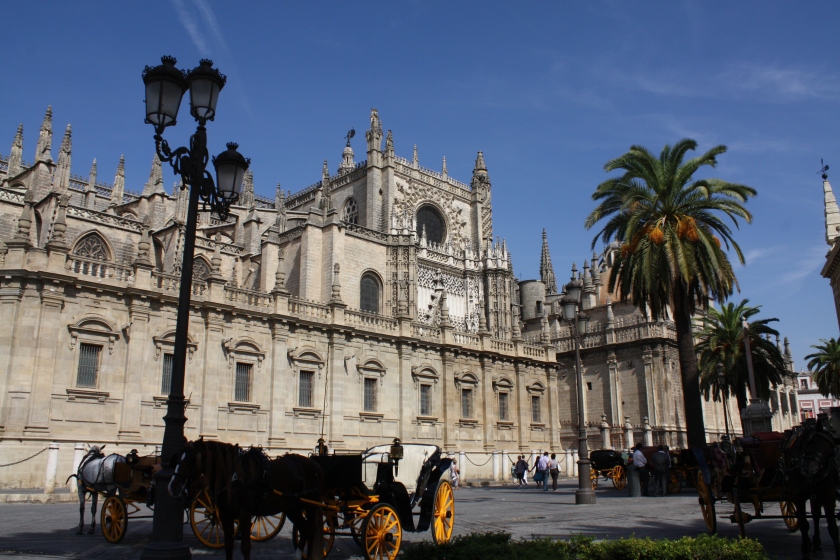 Welcome to part two, the second leg of a long weekend I spent in southern Spain with my son James. We had begun our trip two days before in Granada and following a 3 hour bus journey we arrived in Seville at lunchtime.

Seville is the capital of the Andalusian region of Spain and was the birthplace of flamenco dancing! We located our hotel, dropped our bags and set off to explore…

We headed off towards the Plaza de San Francisco en-route to see the main attractions, the biggest being the Cathedral of Seville and the Royal Alcazar.

The Plaza de San Francisco is a large lively square which is popular with tourists who are either passing through or stopping by at one of the outdoor cafes.

We made our way past the grand cathedral having decided to visit it properly later in the day.

We continued past the gateway entrance to the Royal Alcazar, again with the intention of visiting later.

We came to the Guadalquivir River which runs through the centre of Seville and offers many boat trips. From the Puente de San Telmo bridge we had a good view of the Torre del Oro, a 13th century military watch tower that was also previously a prison in the Middle Ages.

Next to the river is the half-mile long Maria Luisa Park with its palms and orange trees proving attractive shady walkways. The tiled benches, ponds and fountains together with children’s play areas enable a pleasant retreat from the city. We enquired about bike hire however gave that a miss when the vendor insisted I handover my passport as security for the bikes!

Within the park we came to the Plaza de España (translated to Spain Square) which is dominated by huge semi circular building which consists of many alcoves all decorated with intricate ceramic tiles and representing different provinces of Spain.

From the park we walked for a few minutes to the Royal Alcazar an incredible royal palace the upper floors of which are still occupied by Spanish royals when they visit.

The Alcazar is decorated in colourful tiles which date back to the 16th century.

Another short walk and we reached the impressive grand cathedral which is the largest gothic cathedral in the world.

From the cathedral you can climb to the top of the Giralda tower for amazing views of the city.

The Maestranza bull ring has a capacity of 12,000 and is another of Sevilles most visited tourist attractions.

If you are interested in huge spectacular buildings combined with a relaxed outdoor cafe culture and a bit of sunshine thrown in I would highly recommend a long weekend, or even a week dividing your time between Granada and Seville. With the pandemic still raging who knows what is going to happen with flight costs and future travel to Europe? These two Spanish cities would be high up on my travel list if I had not been fortunate to have seen them previously.