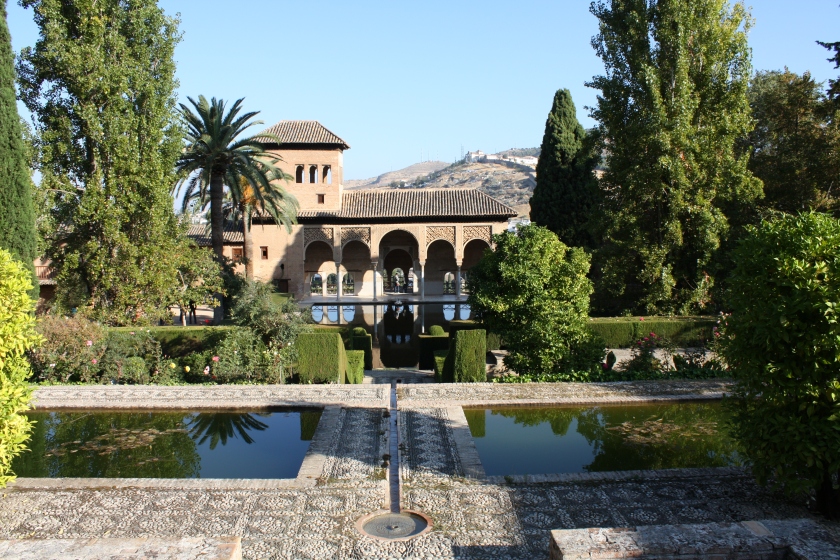 Continuing the throwback Spanish theme this time with a recap of a fabulous long weekend spent in Granada and Seville with James, my son. James was 16 at the time and we enjoyed some quality mother and son time.

This post covers Granada and the amazing Alhambra and the next one will cover Seville.

Granada is a city in Andalusia in southern Spain and is located in the foothills of the Sierra Nevada range of mountains.

On a Friday evening James and I flew with Ryanair from Stansted to Granada. At the time the exchange rate was pretty poor as I had changed £300 and received 305 euros.

From the airport to the Hotel Alixares we shared a taxi with a couple (from our flight) which was 27 euros and after a drink and tapas in the bar we got to our room at 10:30 pm.

The hotel had a fantastic location right next to the Alhambra which enabled us to arrive there at 9 am on the Saturday morning. Back then we didn’t have to queue or pre-purchase our tickets, we just turned up and paid on the door.

We spent a wonderful morning exploring this vast ancient palace and below is a selection of photos showing some of the intricate architecture and tiles. Information on visiting the Alhambra can be found on their official site. It is advised to check this and I understand it would now be necessary to book tickets in advance.

Following our awe-inspiring morning James and I spent the Saturday afternoon exploring the city of Granada. Having left the hotel at around 1:30 pm we set off on foot towards the town. Back then we didn’t have Google maps and did get a bit lost at times as we tried to navigate around the tiny streets with a useless map!

There are pleasant riverside walks in Granada which was easy to navigate! After a delicious tapas lunch in one of the outside cafes we spent the rest of the afternoon getting lost again! We had perfect sunny weather at around 23 degrees.

At the end of the afternoon we took a taxi to St Nicholas place where we were able to get a good view of the Alhambra. We had a drink in a nearby bar then got a taxi back to the hotel at approximately 7:30 pm.

While the Alhambra was incredible, the city of Granada was worth a wander too. I found the city to be typically Spanish with its white houses and narrow little streets although a little scruffy in places with a great deal of graffiti in Granada, even in popular tourist areas.

By now it was Sunday morning and we checked out of the hotel straight after breakfast, just after 9 am. We got a taxi to the bus station, about 15 minutes away. We found the bus bay and the bus to Seville left at 10:00 am. The scenic 3 hour journey took us through barren spaghetti western landscapes with the mountains as a backdrop.