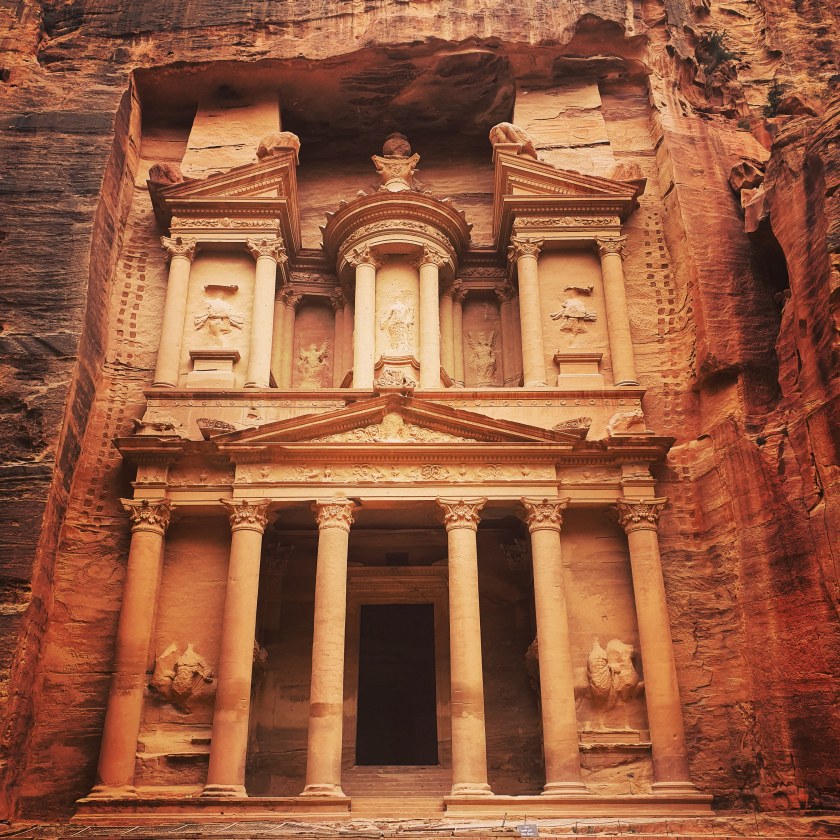 One of the Seven Wonders of the World, the ‘Lost City’ of Petra is high up on many a bucket list. While now a major tourist attraction Petra was originally a bustling city where the Nabataeans (ancient Arab people) had carved amazing temples into the narrow sandstone canyons. This incredible natural backdrop was one of the film locations for Indiana Jones and the Last Crusade.

With our two day pass we were fortunate to have two different experiences of visiting Petra!

Day 1: we called into Little Petra and had a taster at Petra’s little sister… we then drove the short distance, checked into our Petra hotel and had our first glimpse of the majestic Petra proper!

Day 2: we trekked the ‘Secret Road’ from Little Petra and into the quiet far side of Petra and the entrance near to Petra’s ‘Monestry’. 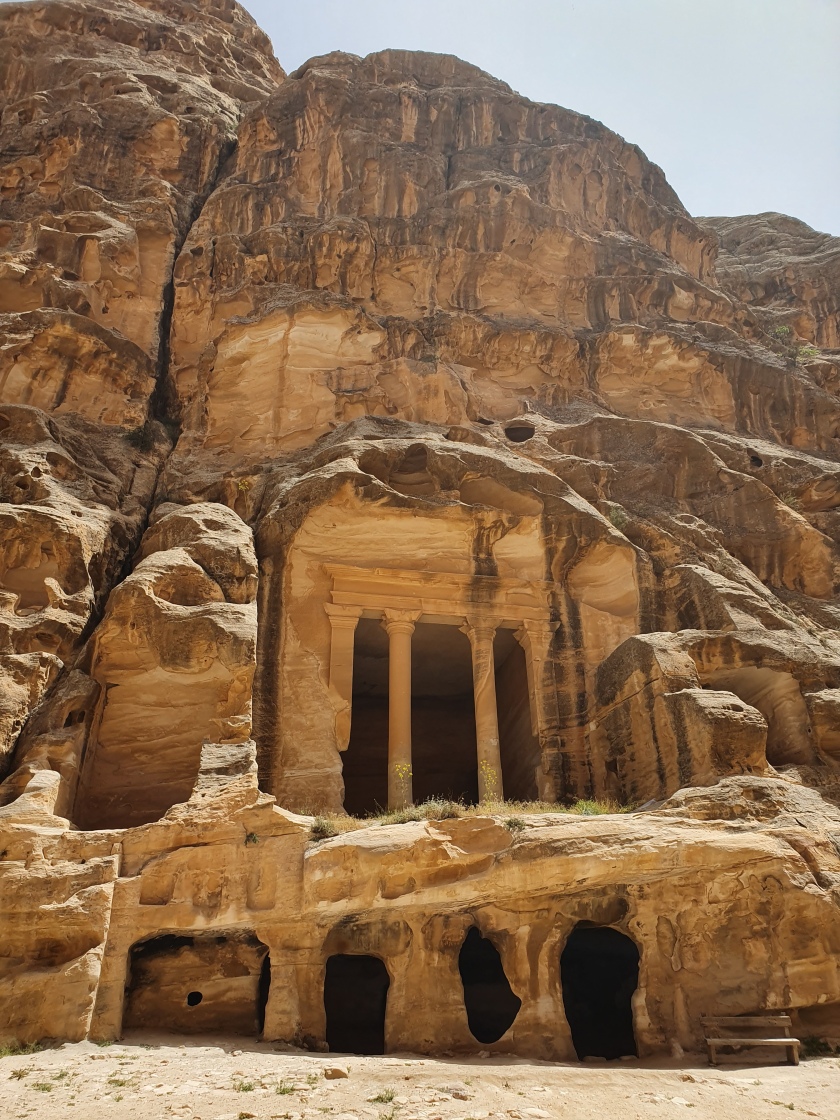 We arrived around lunchtime to the intense heat of Little Petra. This is a smaller version of Petra and is located about 10 minutes away by car. Our guide Mohammad spent around an hour showing us Little Petra and explaining the main features.

In Little Petra we were able to climb some of the steps and enter square rooms that had been carved out of the rocks. Wikipedia explains that it is thought Little Petra was built as a suburb of Petra with the intention of providing accommodation for visiting Silk Road traders.

Our mini bus drove us to the modern town of Petra and we purchased some snacks for lunch then checked into our hotel. Due to Ramadan, many shops were closed and we learned you are not allowed to eat or drink while in the streets.

Following our hotel check in, we boarded the mini bus once more to drive the short distance to the entrance of Petra. Once you pass through the entrance gates you need to walk for 1 km along The Siq, the narrow canyon approach to ancient Petra.

You can hire a horse and carriage to whisk you along the Siq but this isn’t advised… the poor horses have to constantly lug tourists up and down all day through the narrow passages and in high temperatures. And if, like me, you are allergic to horses, I advise you have anti-histamines with you. I struggled to breathe on the way back from Petra! 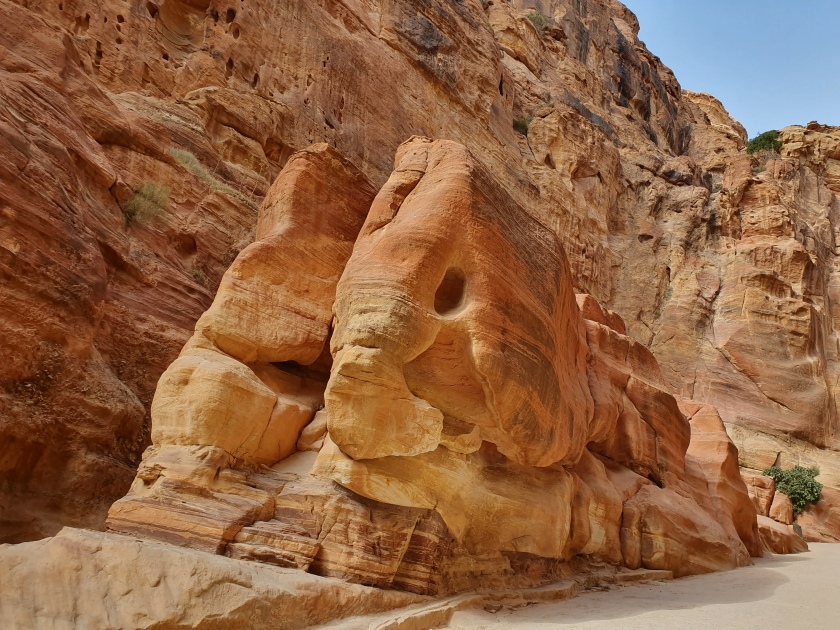 Anyway… while not a huge distance we walked fairly slowly, totally in awe of the huge towering sandstone walls and range of features carved into them. Petra is prone to flash floods some of which have been fatal in the past; as recently as 2018 tourists had to be evacuated. I noticed some of the channels leading into the Siq had been blocked to reduce the likelihood of another disaster.

Above is our first glimpse of Petra’s most famous temple… the towering 40 meter high Treasury.

As we were visiting late in the afternoon, we were fortunate that many of the crowds had disappeared and it was fairly empty! We learned that the Nabateans had cleverly built channels to direct water away from the facade of the Treasury thus to preserve it. It is considered the Treasury was constructed around the 1st Century BC.

The site of ancient Petra is vast and as we knew we would be returning the following day we spent a short time exploring the area called ‘The Street of Facades’ between The Treasury and the Roman Theatre (below).

Wow! We left with the last few people just before Petra closed its doors for the night. What a day and what a fantastic and truly memorable experience!

After having our minds blown away on Day 1 we were in high spirits as we drove back to  the site of Little Petra to begin our trek along the Secret Road towards the ‘back door’ of Petra.

Through the lunar landscape and up and down carved steps… 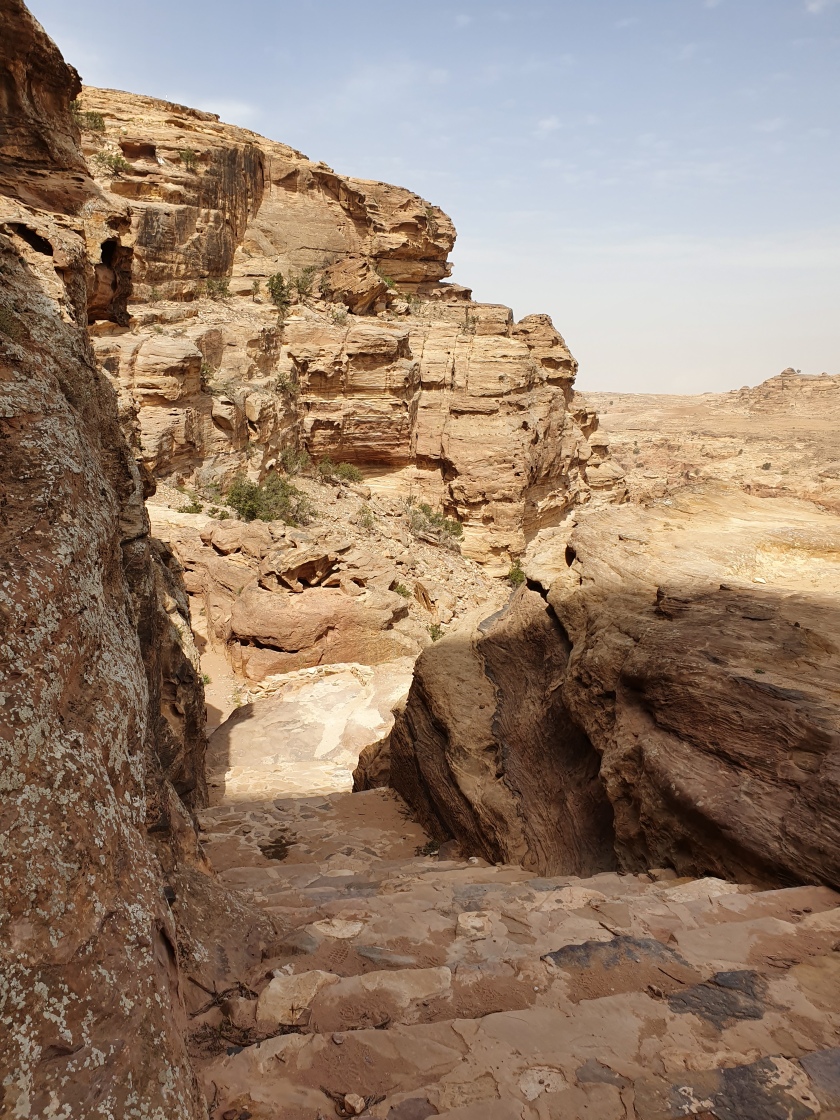 At the top of one of the mountains we had delicious mint tea with a bedouin shepherd. 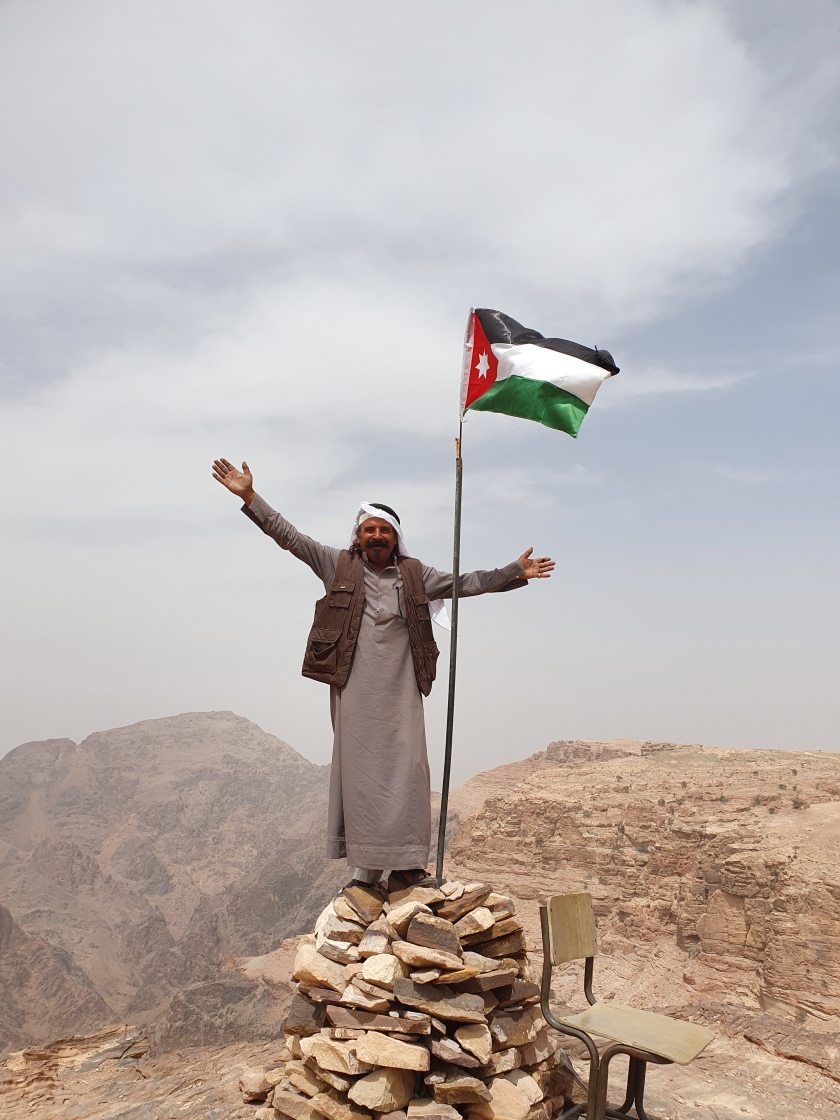 … who was happy to pose for a picci! 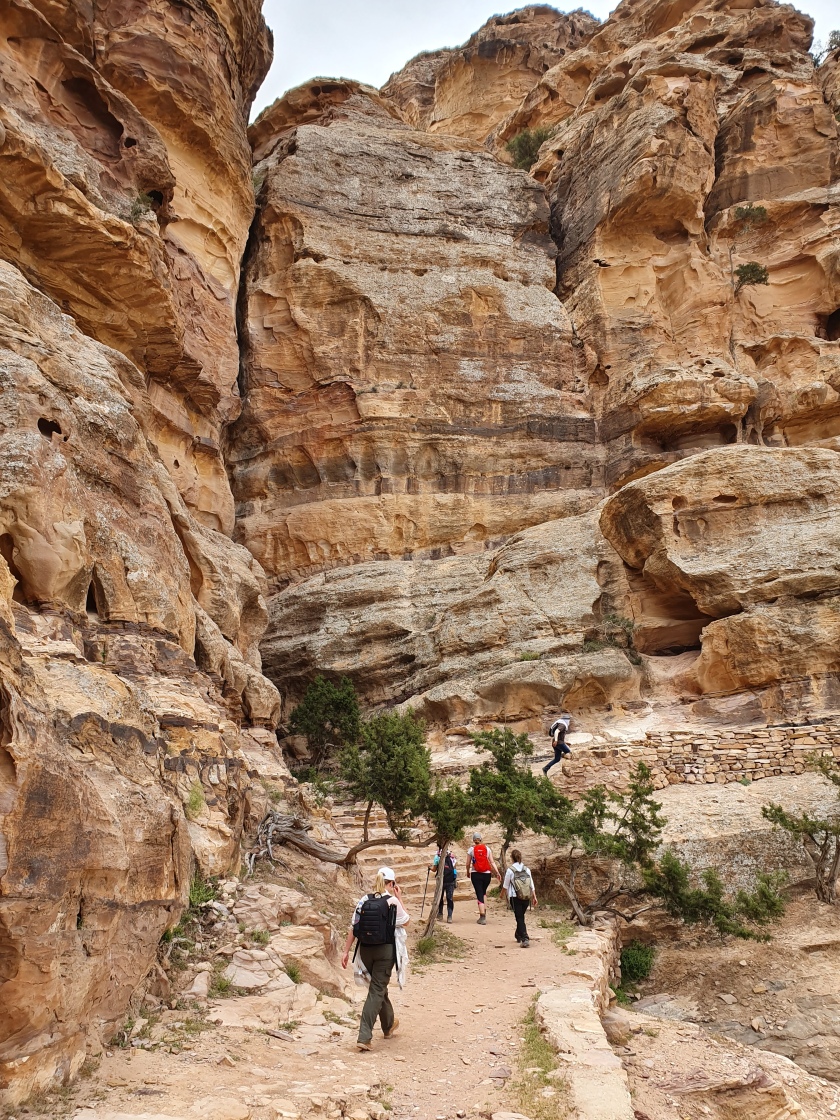 The trek through the mountains took about 3 – 4 hours. We had to present our Petra 2 day pass at a small hut before we could officially re-enter Petra and continue along the Secret Road.

The Monastery is the furthest major temple from the main Petra entrance (as we visited the previous day) and is quite a hike if you visit from there. This was the first place we encountered along the Secret Road.

There are little stalls and some areas for refreshment once you are inside Petra. We stopped at a stall selling amber, frankincense and myrrh and the owner (who incidentally has appeared on the TV show called ‘Travel Man’) explained what frankincense and myrrh actually is and what they are used for! For example, they are used for their perfume and healing properties. These were important trading goods during the Nabatean times.

You need to climb a few steps but its well worth a visit to the Royal Tombs, another feature of Petra. 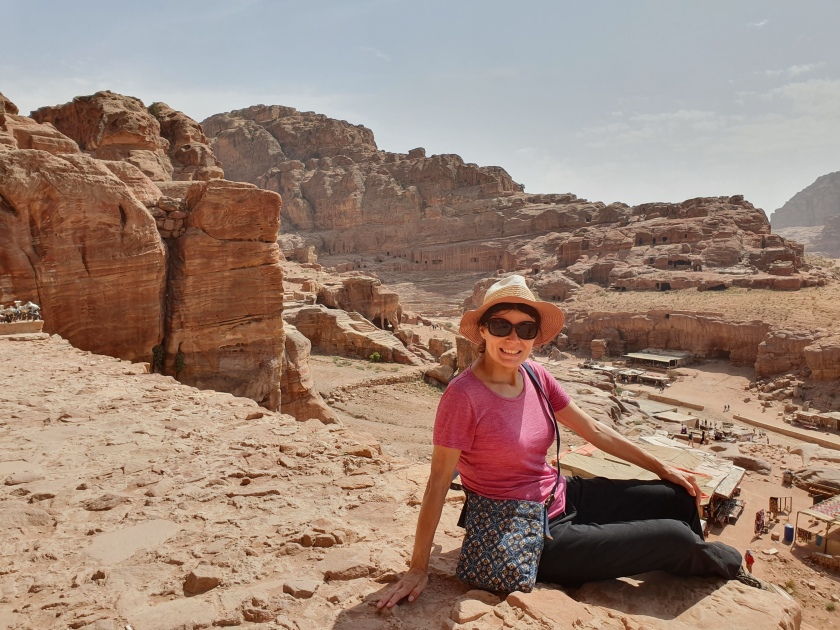 We spent the rest of our day walking through the splendor of the majestic temples and facades back to the visitor centre.

A well presented and informative museum is located outside the entrance gates of Petra; its 5 halls contain many displays of ancient artifacts and statues.

Our amazing two days were completed with a fabulous traditional Jordan meal in a restaurant called ‘My Mom’s Recipe’ in Petra town.