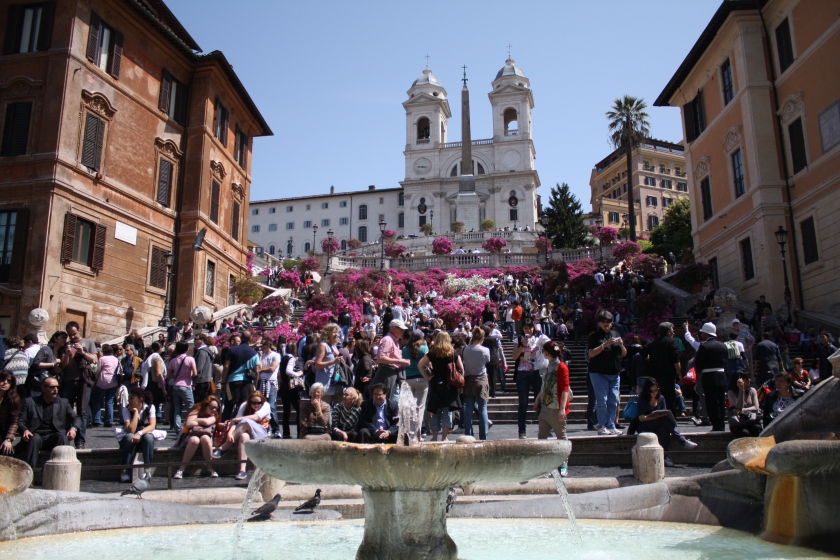 Chris and I have our ‘Road to Rome’ 100 mile walk planned for May 2022 but thanks to Covid restrictions it has now been moved four times so I have no real confidence even for next year. Therefore, getting impatient and feeling somewhat stuck in life at the moment I thought I would reminisce about the last time we were there. This is a small summary to remind us of the great city…

Having met in January 2010 Rome was our first trip abroad together and we choose a long weekend in Rome for its culture, history, sunny weather and of course the delicious Italian cuisine!

Rome, the capital of Italy is located about half way down the west coast and as a Mediterranean country enjoys mild winters and hot summers. For this reason, spring and autumn are often considered good times to visit.

Constructed in AD 70-80 the Colosseum is a huge ancient amphitheatre in the centre of Rome and is the largest and oldest amphitheatre in the world. The first time I visited Rome was in October 2002 with my first husband together with James and Zoe however we found there to be a long queue to enter the site so we admired it from the outside.

The Colosseum is considered one of the New Seven Wonders of the World which, according to Britannica consists of:

However, if you google ‘wonders of the world’ you will find all sorts of variations including the ancient world, the natural world, the original 7 wonders etc.

On this occasion, the queue was relatively small so Chris and I paid our entrance fee and had a look inside. We were interested to learn about the gladiator events which were watched by up to 50,000 spectators. It was fascinating to learn about the history as we spent about an hour or so exploring.

Spanning the Piazza di Spagna and the Piazza Trinita dei Monti, the Spanish Steps date from 1723 and as shown in the photo above, are a tourist magnet and can get very crowded. So much the case that as of 2019 the Italian Government banned anyone from sitting on the steps and have introduced a fine if you do so!

We were fortunate to see the pink azaleas which decorate the steps during April to May each year. The 138 steps are located amidst a maze of narrow streets which are crammed with designer shops and ice cream parlours.

Just a short 10 minute walk from the Spanish Steps is the Trevi Fountain. The Trevi Fountain is the most famous of Rome’s many fountains so again, this can get very crowded. It may be a good idea to visit in the evening perhaps after dining in one of the many outdoor restaurants as we did.

Many people throw coins into the fountain and approximately 2,000 euros are collected each week which are used to subsidise a supermarket for the poor population of the city. I found this information on a site called the Rome Tool Kit which has some useful information for visiting the city.

Located within Rome is the Vatican City which is the home of the Pope and covering just over 100 acres is actually the smallest country in the world. St Peter’s Basilica is the largest religious building in the world and has a huge circular piazza in front. While we were there this had been filled with hundreds of seats.

We had a look inside St Peter’s Basilica from where we could see the huge and impressive dome which was completed in 1590. The intricate mosaics of the dome were completed 3 years later by a variety of local artists.

Many more mosaics and masterpieces decorate the interior of St Peter’s Basilica and it is incredible to experience this spectacular and vast building.

You can either climb or take a lift to the top of the dome for incredible views of the city.

Also at the Vatican you can visit the Sistine Chapel with its colourful and intricate wall paintings and stunning ceiling which was painted by Michelangelo between 1508 to 1512. Without copyright permissions, photography of the Sistine Chapel and showing the results on social media isn’t allowed however you can see thousands of images online if you search for them.

We spent a couple of hours exploring St Peter’s Basilica and the Sistine Chapel both of which were crowded but well worth a visit. (And maybe a return visit next May?)

Chris and I were discussing last night the loss of the freedom we previously had to enable us to visit such incredible destinations in Europe and around the rest of the world. It used to be easy to book our flights, find accommodation and spend a brilliant weekend immersing ourselves in the grand and spectacular attractions of amazing cities such as Rome.

For the present time, the prospect of a trip abroad continues to be filled with uncertainty. Nobody knows for sure whether the current covid restrictions will continue to apply, will improve or will clamp down again should another variant appear.

With friends, we have forthcoming holidays to Cornwall and then to Anglesey in Wales which we are looking forward to while making the most of the wonders of the UK 🙂