May 23, 2019 Chris and Laura Jordan, Trekking Leave a comment

Continuing my Intrepid tour of Jordan we checked out of the Petra hotel and the mini bus drove us to Wadi Rum where we spent 2 nights camping in the desert.

Wadi Rum translates as ‘Moon Valley’ i.e. a wadi is a valley and ‘Rum’ refers to the moon. This was the film location of Lawrence of Arabia a film about TE Lawrence, a British adventurer and archeologist who fought together with Arab guerilla forces against the Turkish Ottoman Empire in the First World War.

The Seven Pillars of Wisdom is the book about TE Lawrence’s crusade against the Turks and this name is given to a famous rock formation near the entrance to Wadi Rum.

Leaving the mini bus at the entrance, we had transferred to jeeps for the next part of our adventure! Two jeeps took us on a tour of some of the spectacular rock formations of Wadi Rum. We were thankful the temperature had dropped during the last day or so to a comfortable 22 degrees. 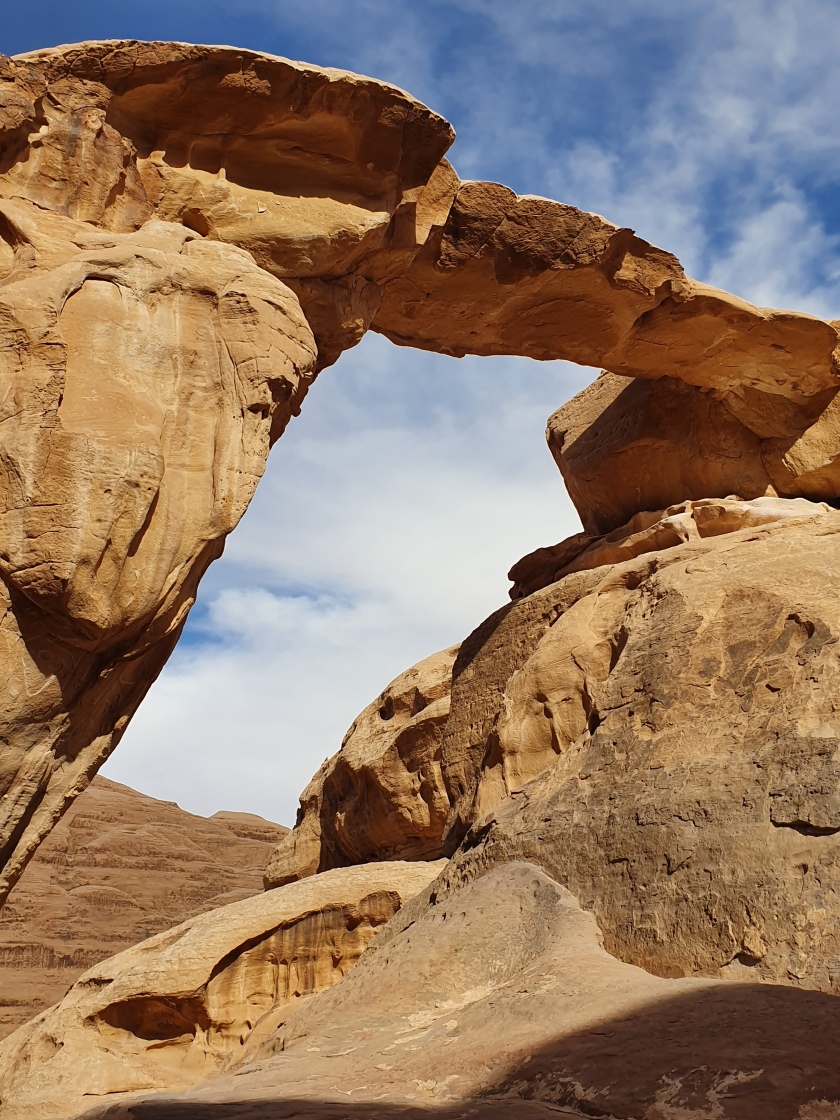 Weathered and battered over the centuries, Wadi Rum was previously under the sea so we were, in effect, driving along the former sea bed!

After a couple of hours of driving around the desert and stopping at various key points to climb around on the rocks and take amazing photos, the jeeps dropped us at our campsite.

We were pleased the tents were fairly large and I was happy we didn’t have to put them up ourselves!

There were two persons per tent although as I had paid the single occupancy supplement I was grateful to have a tent to myself.

In addition to the sleeping tents, there was a large dining tent complete with tables and chairs where we had our meals. The shower blocks were not too bad either and the showers even had hot running water! We were however instructed to spend no longer than 3 minutes in the shower as water is scarce. Also electricity (for lights and power sockets) comes from solar powered generators so we had to be considerate with this too.

We had some time to settle in before meeting at around 7 pm in time for Mohammad to take us for a little scramble up one of the rocks to view a fabulous sun set, turning the desert from gold to red… 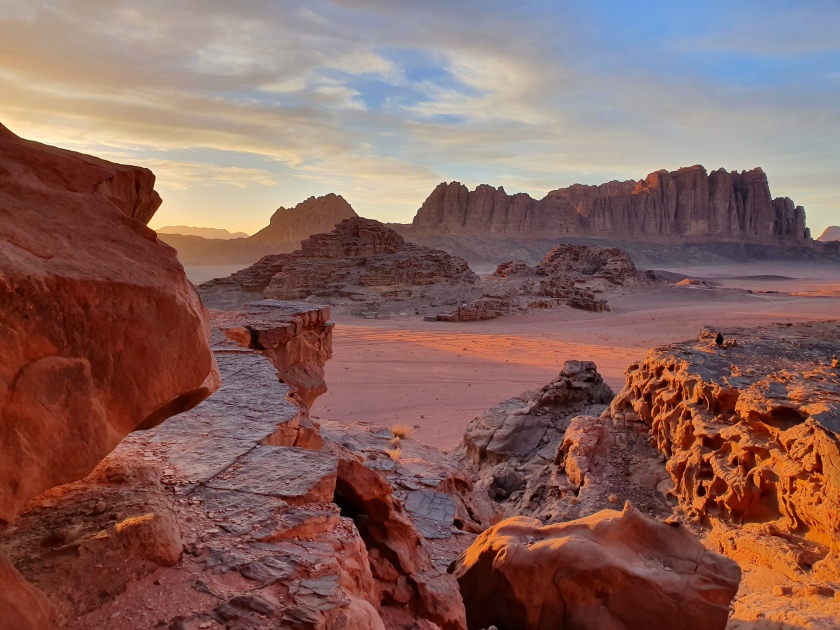 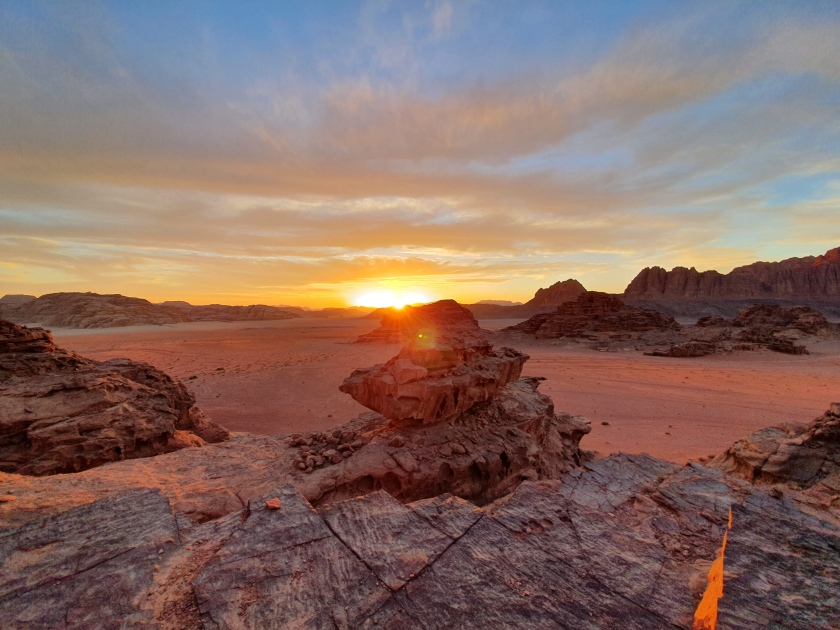 A delicious dinner was served in the main tent and a fire was lit outside where we could lay on thin mattresses and gaze up at the amazing clear night sky… well a bit of cloud was present on the first day but this didn’t stop Mohammad from giving us an interesting astronomy lesson, pointing out constellations with his powerful lazer.

By now the temperature had dropped significantly and we retired to our tents ensuring  we were well wrapped up with several layers!

Having woken to an incredible view and following a traditional breakfast of flat bread, hummus and a few more dips (including one that was fairly sweet and even thought it had a consistency of soft crumbly rocks it was actually quite tasty) we had a day of desert trekking ahead of us!

Incidentally, I bumped into Nomadic Matt at breakfast this morning! Nomadic Matt is one of the most famous travel bloggers in the world and he was staying with the other Intrepid group. His group were leaving that morning meaning our group would have the camp to ourselves for the rest of our time there. I had a chat with him and thanked him for the inspiration he has provided during the last few years particularly when Chris and I were planning our 2016 global travels.

In pleasant temperatures of around 20 degrees, Mohammad led us by foot across the desert, pointing out places and rocks of interest as we walked. And the tracks made by desert creatures… including a snake! In fact, Mohammad saw a snake during this trek but it disappeared pretty quickly and before most of us had the chance to see it. 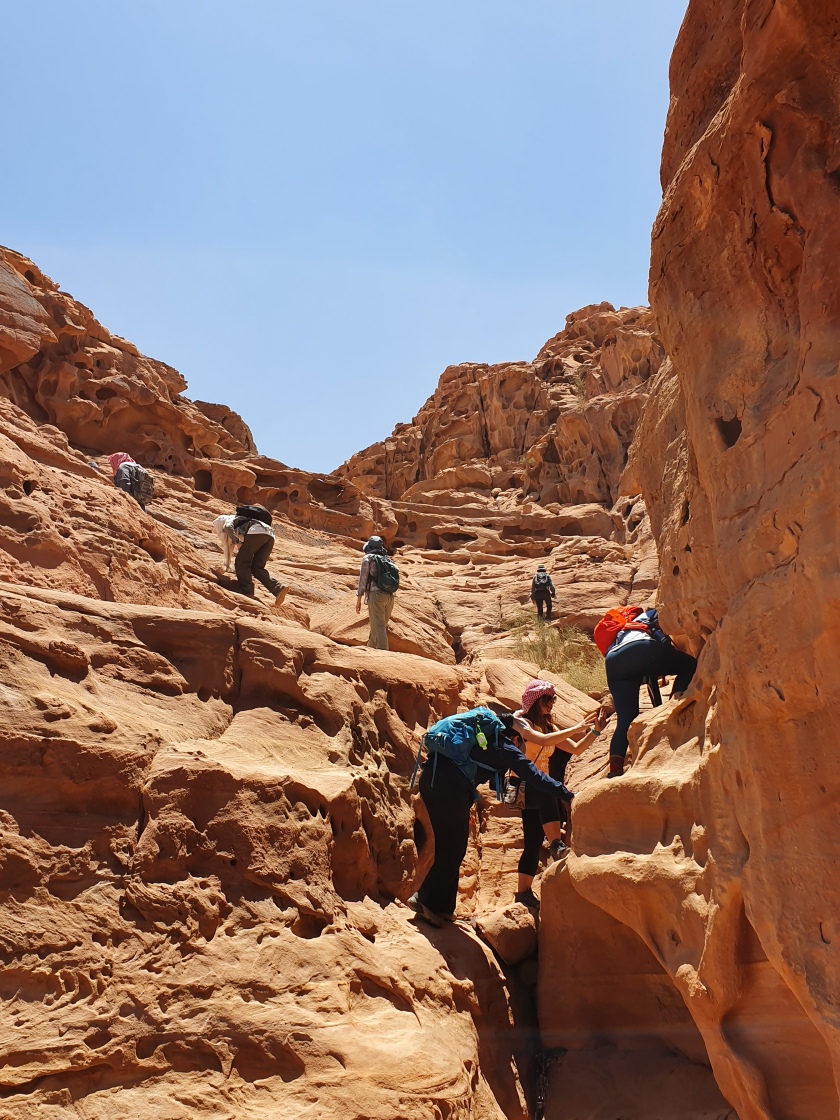 We returned from one of our rock scrambles to find Omar had made some tea for us!

We did a circular trek throughout the morning and arrived back at the camp in time for lunch. The rest of the afternoon was spent relaxing; some of us read books in our tents and some spent the afternoon drinking mint tea and lounging around chatting!

Before dinner tonight, Mohammad and Omar led us up the large rock behind the campsite to sit and watch another spectacular sunset! 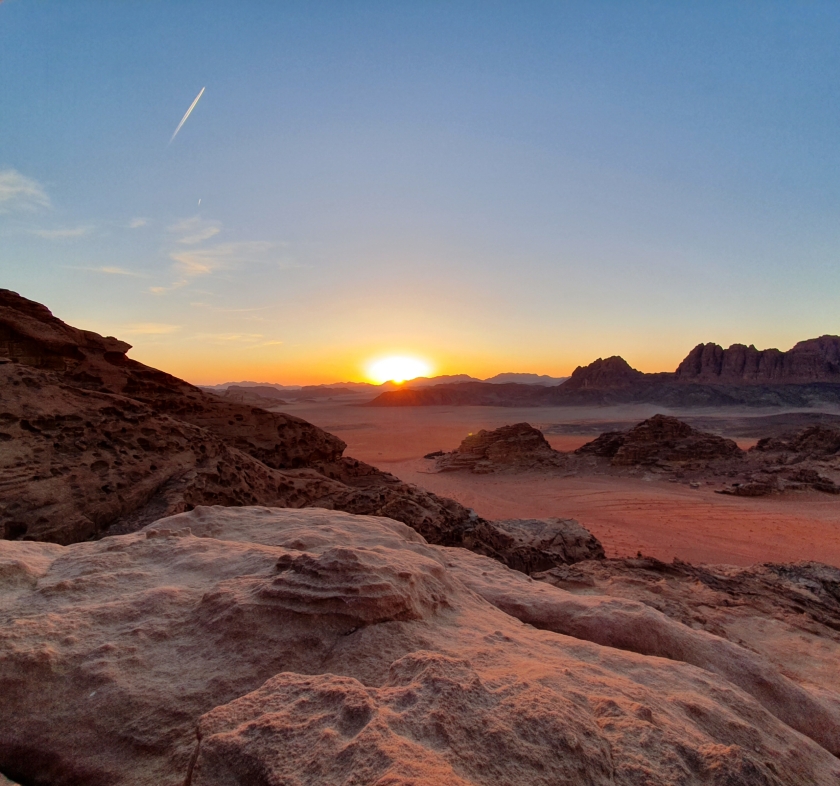 We were treated to a delicious Bedouin dinner tonight, all of which (chicken and fresh vegetables) had been cooking for 3 hours underground. This is similar to the Maori hangi dinner Chris and I experienced in Rotorua, New Zealand.

The sky was incredibly clear tonight; it was a privilege to look up in wonder at thousands of silvery twinkling stars in the vast black depths of the universe.

Sadly our time in Wadi Rum was coming to an end… after breakfast we packed up our gear, loaded the jeeps and set off back through the desert. Thankfully it wasn’t quite the end as we had a last hour-long trek through more of the amazing rock formations of Wadi Rum: 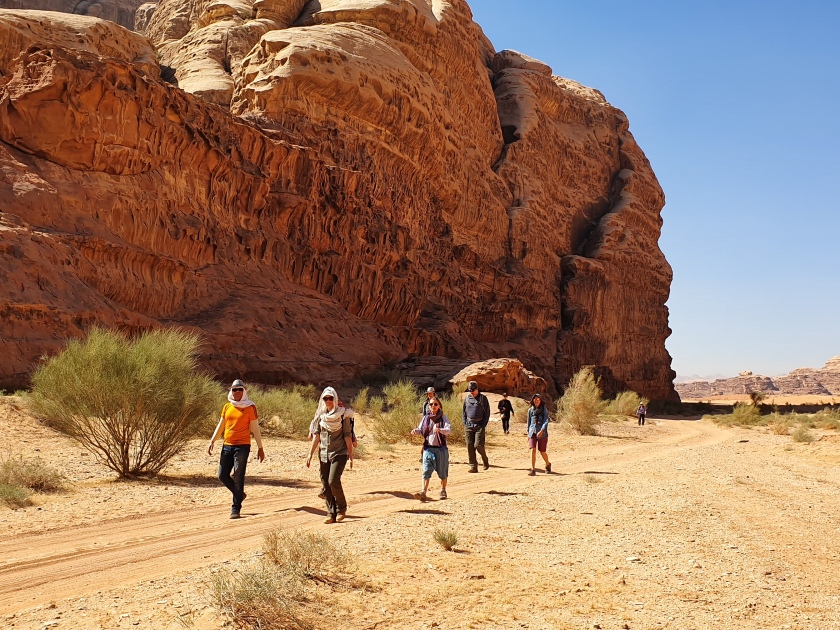 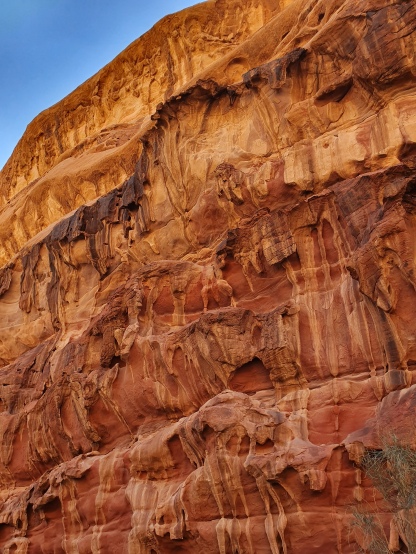