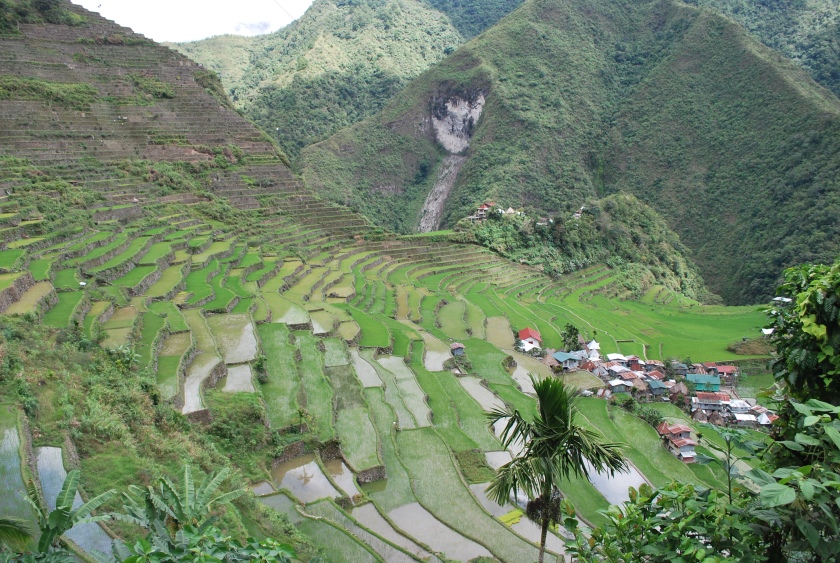 This is an account of our journey from Manila to the Banaue and Batad rice terraces which may be helpful for anyone planning a trip there.

We stayed in the Aurum One Makati hotel in Manila who looked after our case while we went to Banaue. So once we had checked out at midday and left our main case behind we set off with our small backpacks and had to occupy ourselves for a day.

Having scanned Lonely Planet for ideas there really wasn’t much we wanted to see in Manila. It was also hot and we didn’t want to walk around for too long outside while carrying our backpacks.

We therefore decided to get a taxi to the Mall of Asia, a large shopping mall which was a short distance from our hotel. The taxi to the mall was 84 pesos (£1.25).

We had our bags searched by the security guards on the doors to the mall. Neither of us are really into shopping so we wandered around for a bit and had some lunch in a coffee shop.

After a while we decided on a change of scenery and thought it would be good to base ourselves nearer to the Ohayami Bus Stop in the Sampaloc area of Manila. We hired a taxi (500 pesos) which took around 45 minutes to get to the San Lazaro Mall.

We walked around the mall for a bit and had dinner at around 6.30 pm.

We hired a taxi for the short distance to the Ohayami Bus Station. Some of the local taxi drivers are not sure where the station is so it is helpful to explain that the bus station is located on the corner of Lacson Ave and Fajardo St.

As the buses are often full we had previously booked our bus tickets online. We booked ours through Pinoy Travel where we received a good service and paid via PayPal, although it probably makes sense to book directly with Ohayami buses. On arrival we handed over our printed bus confirmation in exchange for our bus tickets.

When we arrived the bus station was crowded and bustling with a mix of tourists and locals. We found seats and sat patiently waiting for our 10 pm bus. There were 3 buses departing the bus station between 9 pm to 10 pm so the waiting area started to thin out as people boarded earlier buses.

At 9.15 pm an announcement was made for the 10 pm departure! Yay… off we went to find our seats. Our hearts sank a bit when we realised our seats (numbers 41 and 42) were right on the back seat of the coach. However they proved to be good seats as they reclined to an almost horizontal position, more so than the seats in front. The bus was fully booked and people had seats in the aisle too (which folded down from the main seats).

The bus left the depot on time at 10 pm. It made two stops en-route where we had a break of around 20 minutes each time. On both occasions we were able to buy drinks and snacks.

There was no wifi on the bus (although it was advertised) and no phone charging facilities. (However the return Ohayami bus back to Manila did have limited wifi).

The seats were relatively comfortable and despite the Ohayami website stating the buses are often cold due to air conditioning, the temperature was not too bad and a jacket wasn’t really necessary.

Much of the journey was busy with traffic as the bus went through towns and villages. The traffic significantly reduced as we began to drive into the mountains and as the sun started to rise we had a great view of our surroundings.

The bus arrived at 7.30 am at bus stop just inside the town of Banaue. We were met by Jasmine from the Batad Transient House which we had previously booked. Some of our fellow bus companions did not have accommodation booked however Jasmine had a number of contacts in Batad and offered accommodation to those who needed it. Accommodation was also available in Banaue.

Batad is an hour’s mini bus journey away from Banaue and this cost an additional 1800 pesos each (£27) return. We were not aware it would be this expensive so this is something to consider if you choose to stay in Batad rather than Banaue.

We travelled with Jasmine and another 6 people for a couple of km to the Seventh Heaven restaurant in Banaue where we stopped for breakfast. While eating breakfast, Jasmine spoke to everyone individually to discuss their ‘tour package’. She offered us a walking tour later that day, a second tour the next day and a tour to a hot spring on the third day (see pic below). This was to cost around £25 each so we decided to go ahead and book them. (In hindsight we decided that if we are in a similar situation in the future we would not pre-book any such tours until we arrived in the accommodation and found out more about them).

Above is a picture of the walk through Hapao rice terraces towards the hot spring.

As mentioned the mini bus then took an hour through the mountains to reach Batad. The bus stopped where the road literally ended. There was a couple of stalls selling snacks and drinks and one or two jeepneys and other vehicles around.

We continued our journey by walking down a steep muddy track for about 20 minutes, while carrying our luggage. We stopped at Jasmines sisters place to have a rest and see the view, and one couple were offered a room there.

We thought we were nearly there but then had another 15 mins of steep downhill steps before finally reaching the Transient Hotel. At this point we were glad we had left the bulk of our luggage in Manila!