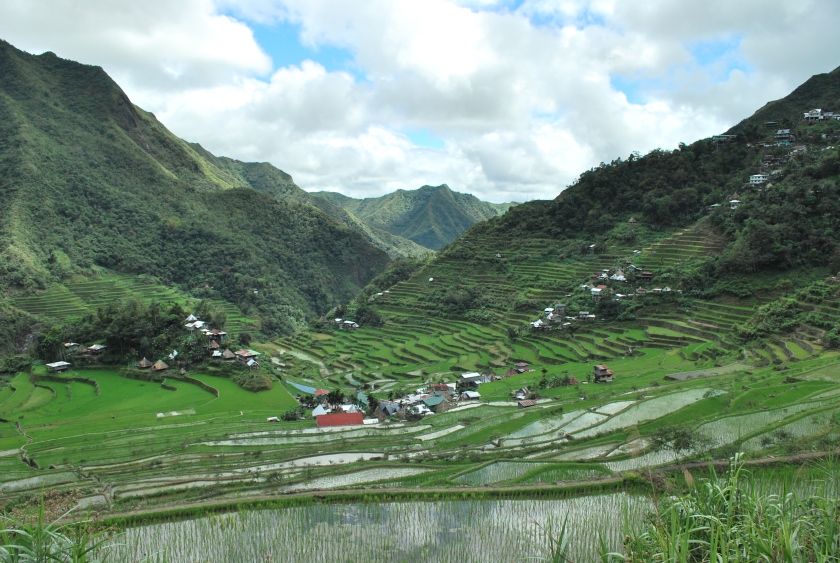 This is a report on the three days we spent in the Batad rice terraces, living in the village in traditional accommodation. Batad is only 15 km from Banaue but as the link between the two villages is a winding mountainous road it takes around an hour to get there. Both Batad and the more famous rice terraces at Banaue form part of the Ifugao region of the Philippines.

Banaue and Batad rice terraces were built around 2000 years ago; Banaue has mud walls whilst Batad’s walls are made from stone.

The road from Banaue comes to an abrupt stop and from there you need to walk down a muddy track for around 40 minutes before you reach the village of Batad.

There is no wifi or mobile phone coverage in Batad though there are both in Banaue. Banaue also has an ATM.

We stayed at the Batad Transient House which we found on Booking.com.

The village of Batad is located on the side of the rice terraces so most of the walks involve steep uphill and downhill climbs on muddy and stone steps. 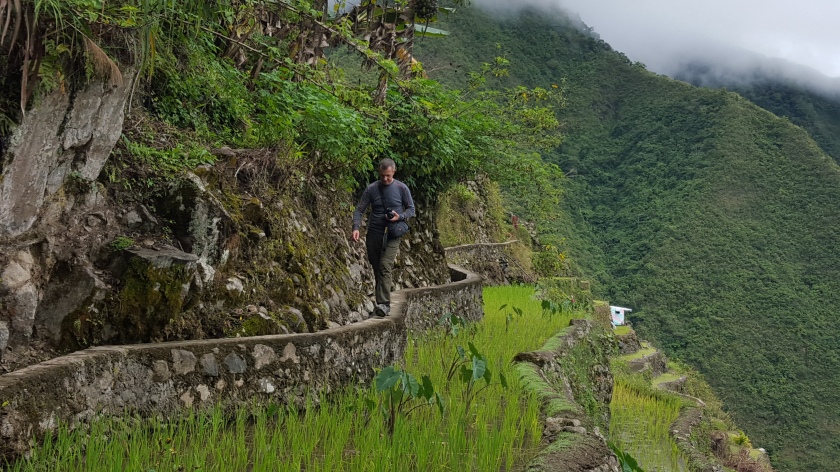 The walks weave through the rice terraces which can be narrow to walk along and often have a steep drop on one side. If you were to lose your balance you need to try to fall towards the less steep side which wouldn’t be too pleasant either as you would fall straight into about 8 inches of muddy water and ruin a small patch of rice crops at the same time!

It is possible to navigate yourself around the rice terraces although we found it easier with a guide.

The village itself was basic but had a rustic charm. It was clear that family unity was very important. Children were mucking in with the menial tasks like hand washing clothes and pounding rice. Many households were trying to make a living by selling drinks and snacks or weaving items for tourists.

Batad villagers are also extremely fit! Being located on the side of a steep hill they spend their lives continuously walking and running up and down steps to get from one place to another and receive constant exercise with each stage of rice production.

Older children go to school in Banaue. Many of them leave school and college and don’t return to Batad. Some of the Batad villagers have concerns for the future of their rice farming and the village is now partially supported by tourism rather than the traditional production of rice.

The small wooden bedrooms were grouped together in the large hut and the bathroom was shared. Having a shower meant walking up the muddy steps to the building and using a bucket to wash with. One night it rained heavily which made it slippery to negotiate and the roof leaked!

We ate all of our meals at the Transient House which were generally good quality. For example we had local curries, vegetable garlic rice and a local dish called ‘Adobo’ which can be made with chicken, pork or vegetables which are marinated in soy sauce and vinegar.

Also on the menu was a range of omelettes including potato omelette. There was sometimes a communication breakdown between your order being placed and the food you actually received!

We also tried some Batad rice wine which was dark and cloudy and had a woody taste.

The organic rice from the terraces is ground from its husks by hand. We helped to grind the rice by pummelling it with a huge pole… After about half an hour and some nifty sifting by the local lady the rice was ready… And the chickens got fed too…

Shortly afterwards we had rice cakes (with the rice we ground) which was similar to firm rice pudding and made with coconut milk. Ifugao people have to grind their rice twice a day. If they don’t do this, they have no breakfast or dinner. 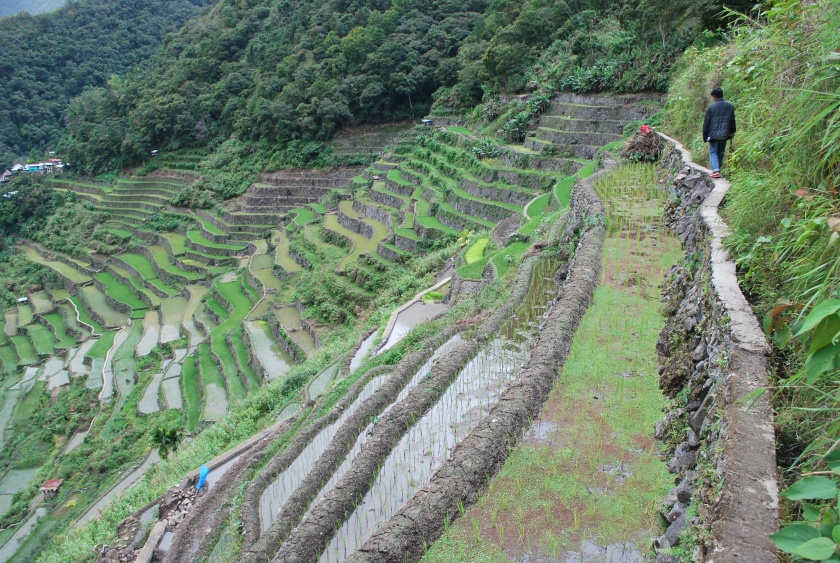 We feel that one or 2 nights is probably enough to experience life in a traditional Ifago village. Maybe longer if you are a keen walker/fit/want to get away from it all perhaps to sit quietly and read or chat to people (we met some lovely fellow travellers here). Maybe less if you just want to see the terraces.

Living for just a couple of days without the day to day luxuries of modern life served to remind us how privileged we are to have hot showers with tiled floors, internet connection with online access to any information we want or need, food we can buy whenever we want and cars to transport us around. People have lived in basic conditions for centuries including our ancestors in the UK. Millions of people around the world are still living basic and often hard lives.