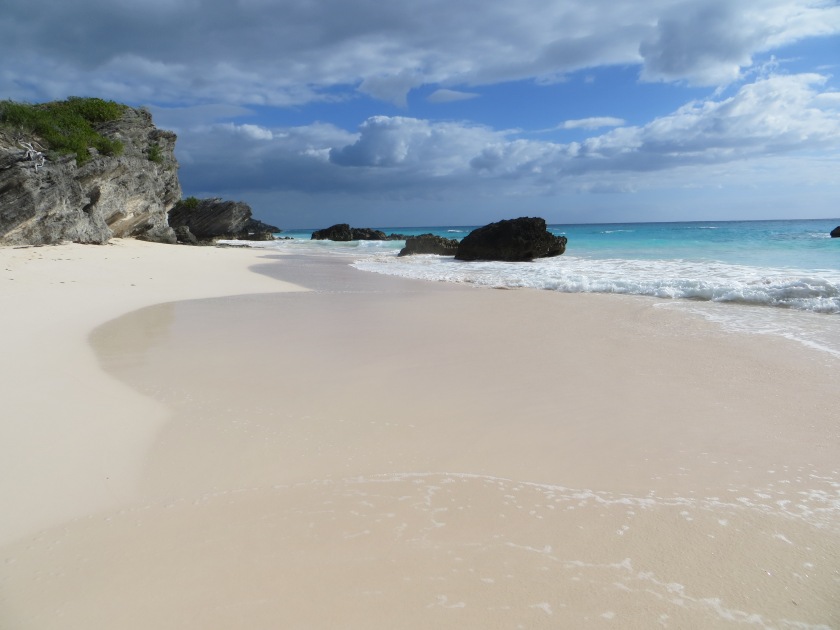 Bermuda is a “self governing overseas British territory” located in the North Atlantic, to the north of the Caribbean and around 665 miles east from North Carolina, on the east coast of the USA. With its pink sand beaches, colourful buildings and crystal clear sea we were fortunate to visit and stay for a week.

The main island of Bermuda is small, shaped like a fishhook and only about 35 km from one end of the island to the other. The currency is the Bermudian Dollar.

For me (and probably for most people), two things spring to mind when you think of Bermuda… long shorts and a certain well-known triangle… Locals seem to take a pride in wearing their Bermuda shorts and indeed, the staff in our hotel wore them as part of their uniform. Bermuda shorts are smart casual tailored shorts which finish just above the knee and are considered part of formal business attire in Bermuda.

Numerous ships and planes are said to have mysteriously disappeared in the famous Bermuda Triangle… the patch of the Atlantic Ocean which extends between Bermuda, Miami (Florida) and San Juan (Puerto Rico). There have been many theories although something to do with the weather as mentioned in this article in the Independent seems the most feasible…

One of the main reasons for choosing Bermuda as a holiday destination was to visit Chris’s brother and his lovely partner who are lucky enough to live on the island.

January in Bermuda is the low holiday season mainly due to the cooler weather conditions. But taking a week somewhere warmer than England right after Christmas is always going to be a bonus! We were fortunate that 6 of our 7 days were sunny and around 20 degrees.

Another bonus about Bermuda in January is the flights are fairly empty! Both ways, only about 15-20% of the British Airways seats were occupied meaning rows of empty seats! What luxury… nobody in front to suddenly slam their seat into full recline whilst coming within half a mil of completely smashing to smitherines the laptop screen you have carefully balanced on the plastic tray in front of you… nobody pulling on the seat behind you… nobody’s elbows hogging both armrests and thankfully no screaming kids!

Chris and I spent our days exploring Bermuda using its well connected and cheap bus system. There are plenty of walking options and activities on Bermuda and below are some of the places we visited:

Hamilton is the capital of Bermuda and was founded as a British Colony in 1790. With its pastel coloured buildings and picturesque harbour setting, and of course proximity to the US, Hamilton is a popular cruise stopping destination

There are many good quality restaurants and bars in Hamilton. We frequented Flanagans, a lively Irish pub in Hamilton where we sampled ‘Dark N’ Stormies‘ one of Bermuda’s national cocktails. This delicious cocktail is made with dark rum and ginger beer. 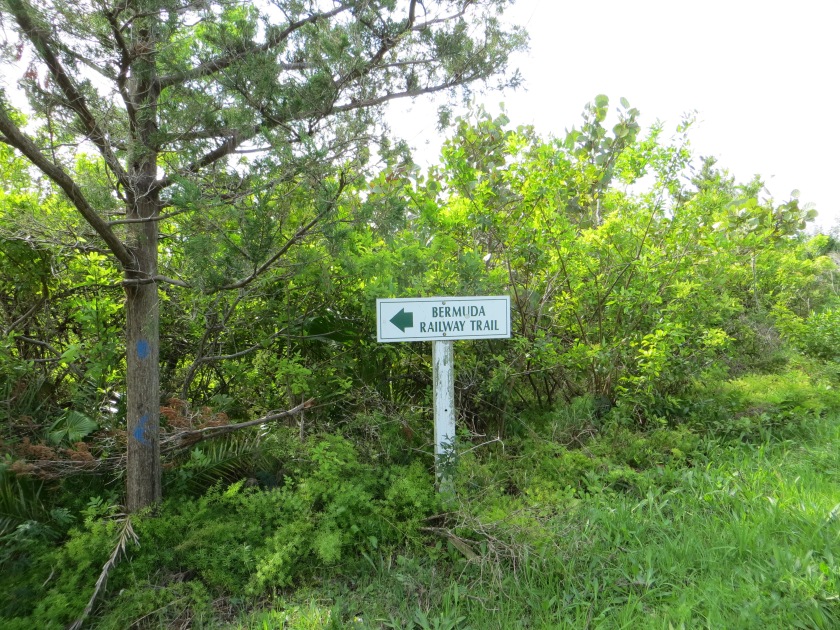 The Bermuda Trail was transformed in 1984 from the original Bermuda railway track (previously used for transporting goods around the island) to a walking and cycling trail. You can follow 18 of the original 22 miles of track which stretch from one end of Bermuda to the other.

We walked the final 6 miles of the trail finishing at Dockyard (photos below) at the end of the island. (The bus route runs alongside the trail so you can simply get on or off the bus as you wish). 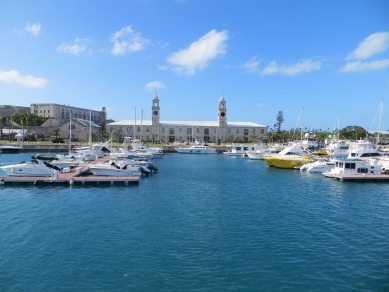 We began at Scaur Hill Fort Park and headed off towards Dockyard in the Parish of Somerset. On the way we stopped at Glass Beach, one of the Bermudian beaches where tides and currents erode broken glass bottles to leave glass pebbles. This strange phenomenon doesn’t occur on every beach with the glass pebbles just collecting in concentrated areas.
We continued on to historic Dockyard where we enjoyed a tasty lunch, washed down with a dark n stormy as we sat outside in the winter sunshine.

The following day we headed to the other end of Bermuda where we did another 6 mile walk this time a circular walk around St George’s island. We parked the car at the quaint colourful little town of St George’s and had a drink in a bar before setting off. We stopped to look at Tobacco Bay, Fort St Catherine, St Catherine’s Beach, Bermudas 400th anniversary monument and back round to the town.

Following our walk and another refreshing drink we headed off to St David’s where we parked at Cooper’s Island nature reserve. We walked along Clearwater Beach, Turtle Bay and Long Bay to the tip where we climbed the observation platform. We walked back along the cliff top and looked in the bay for turtles and were fortunate to see a turtle popping its head out of the sea!

It starting to get dark at about 5:30 pm so we drove to Swizzle Inn (home of the Bermuda swizzle cocktail) for a huge and delicious plate of nacho’s, washed down, of course, with a swizzle each!

One morning we had a lovely time walking along the beaches and the coast path from Horseshoe Bay to Warwick Bay. The weather was warm and sunny (around 21 degrees). Above is one of the little coves next to Horseshoe Bay. This beach did have a pink tinge but my camera didn’t quite pick this up! Below is a close up just to show there really is pink grains of sand!

On the way back we took the coast path rather than walking back along the beaches. Once we got back to Horseshoe Bay it was lunchtime so we stopped at a bar (the Gulfstream restaurant) and had a dark and stormy and shared a pizza. I mentioned that the soup sounded good so the waiter kindly brought me half a bowl (on the house) to try!

We visited this museum which is located in the Dockyard area of Bermuda. This is well worth a visit and gives you a wealth of information on the fascinating history of the island. Due to our January visit there were no crowds which I understand might be a different matter during the high season and particularly is there is one or more cruise ships docked.

A huge and awe-inspiring mural called ‘The Hall of History” is located in the Commissioner’s House in the museum. This incredible feature was created by an artist from Bermuda called Graham Foster. The mural took over 3 years to complete and shows five centuries of Bermudian history.

Flatts is a pretty village with a small harbour containing amazing glassy translucent water which made the boats look like they were floating just above the water rather than actually being in it! The Bermuda Aquarium and Zoo are located in Flatts and you can stand on the harbour bridge where you can sometimes spot turtles swimming underneath.

This nature reserve is the largest wildlife sanctuary on Bermuda and has a high concentration of birds and wildlife. There is a path which winds through the sanctuary and leads to the rocky jagged coastline and spectacular coastal views.

Migratory and resident birds and also water birds are attracted to Spittal Pond, the third largest pond on the island. 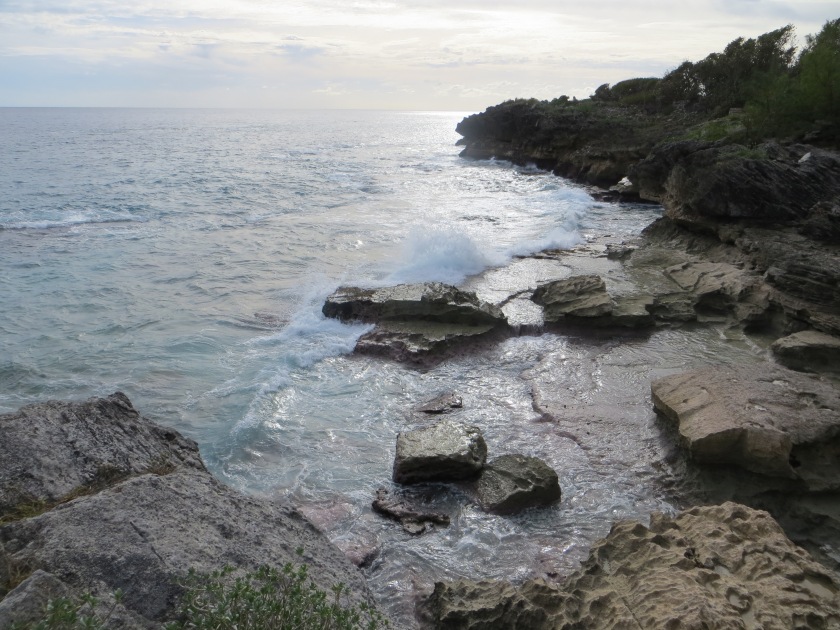 We spent a lovely and relaxing afternoon where we walked the full length of the path at the nature reserve.

The Portuguese Rock overlooks the Atlantic Ocean within the Spittal Pond Nature Reserve. It contains inscriptions dating back to 1543 which are thought to be Portuguese (hence the name) although there are also suggestions they may be from early Spanish settlers so the rock is also sometimes called the ‘Spanish Rock’.

The Caves of Bermuda are said to be one of the top attractions and while we have been to several caves around the World, these didn’t disappoint! Fantasy Cave and Crystal Cave are next to each other and are quite different and unique so it is worth visiting both of them.

You can visit one or the other and the combination ticket is $32. This price is somewhat expensive (this is Bermuda…) and includes a guided tour where the guide takes you through and explains the history and geology of the caves. Both caves have underground pools with clear still azure water and wooden walkways. There a quite a few steps to climb so this wouldn’t be suitable for everyone.

As mentioned above we visited Bermuda during the low season which is the time when bargains are to be had! We booked a BA package holiday and stayed at the fabulous Fairmont Southampton. We were on a room only basis but most days paid extra for a sumptuous breakfast each morning.

Bermuda has a high cost of living and even though we had a good deal for our BA holiday to Bermuda, we still managed to get through vast amounts of money during the week we were there… the average meal for two was over £80!

As mentioned, there is an efficient and reliable bus system serving the whole island with some of the bus routes (from Hamilton) running until nearly midnight. You need to buy tickets before boarding the bus and give the driver the necessary tickets for your journey.

We were fortunate that Chris’s brother and his partner had access to a car and kindly drove us around for a couple of days. The rest of the time we were happy to get one of the many buses available. There is no car hire available in Bermuda which would limit your options a little. Other options include taxi’s, scooter hire or booking an organised excursion.

We were fortunate to spend quite a bit of time with Chris’s brother and his partner and have a glimpse into their ex-pat lifestyle and the unique culture of this tiny island. They were great hosts and gave us plenty of tips on where to visit, showed us some amazing picturesque places, cooked us a delicious meal and took us to some lovely restaurants. This is the kind of ‘inside knowledge’ you would only get from people who live there and know where the best places are…

While January probably isn’t the optimum time to visit Bermuda, and we were lucky to have experienced good weather, you pay a significant premium to stay in the high season. We both enjoy walking and exploring and neither of us are keen to sit on the beach and follow the crowd so Bermuda in January suited us well. We had added bonuses such as probably the least crowded plane journey’s we’ve ever experienced and gorgeous deserted beaches. There is a lot to be said for visiting a destination during its low season…