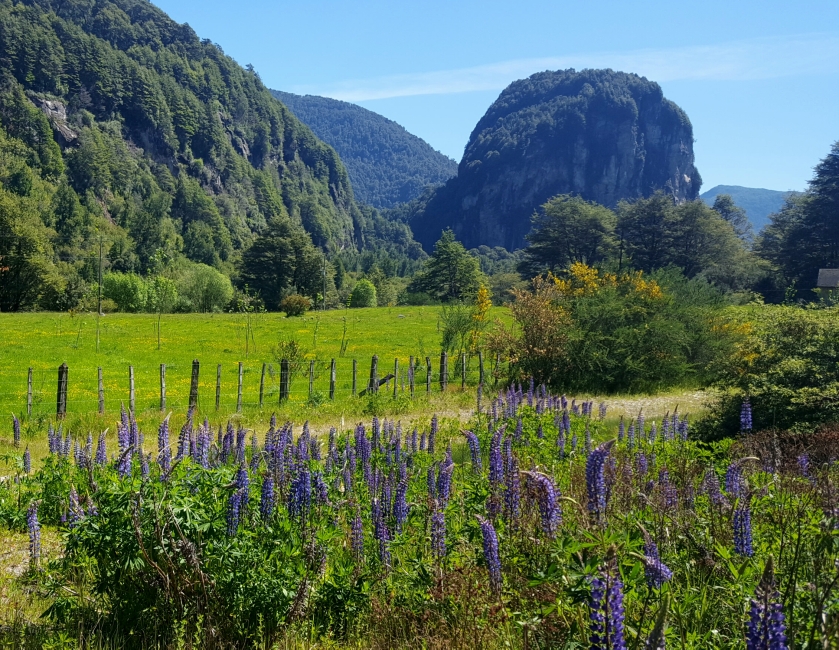 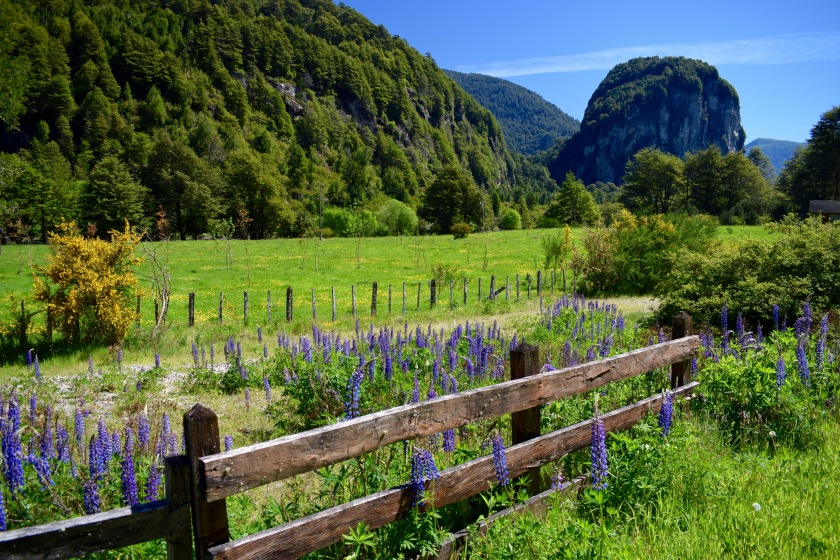 Patagonia is a large, desolate region in the south of South America stretching across Chile and Argentina. As our ship was travelling around the tip of South America from Valparaiso, Chile to Buenos Aires, Argentina we visited several Patagonian ports of call. This post covers the first two, Puerto Montt and Puerto Chacabuco and our first experiences of port visits from a cruise ship! 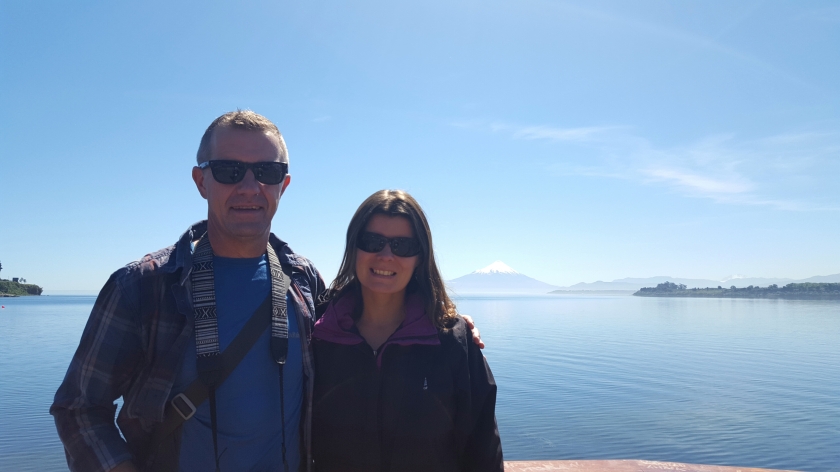 Puerto Montt is located in Reloncavi Sound in the province of Llanquihue in Chile. The town was founded in 1852 and named after Manuel Montt the Chilean president of the time.

Puerto Montt is part of Chile’s green and beautiful Lake District and is surrounded by the southern section of the Andes Mountains and Patagonian fjords. Puerto Montt was originally populated by German immigrants which gives the town a German feel.

As the ship was too large to dock in Puerto Montt we had to get a tender boat. These are small boats which ferry people backwards and forwards between the anchored ship and the port.

We had previously read that there isn’t much to see in Puerto Montt so upon disembarkation from the ship and tender boat we found the local bus station, located along the sea front a short walking distance from the cruise terminal. We paid 800 Chilean pesos, the equivalent of less than £1 each way to visit the nearby town of Puerto Varas. You don’t need any kind of metro card to ride on the bus you simply pay the 800 pesos to the bus driver for the 20 minute journey.

Puerto Varas is an attractive town located on Lake Llanquihue and from here we had excellent views of the symmetrical cone shaped Osorno Volcano. Due to its similar shape this volcano is often referred to as ‘Mount Fuji’s little brother’. We walked around the lakeside and enjoyed a coffee in one of the coffee shops.  With its laid back feel and spectacular scenery this lakeside town reminded us of Wanaka located at Lake Wanaka in New Zealand and is worth a short visit from Puerto Montt.

Isla Tenglo is an island across from the harbour in Puerto Montt. It is easily recognised as it has a huge white cross on top. If you have time you can take a separate boat from the harbour across to the island which offers short hiking opportunities where you can walk up to the cross.

Following Puerto Montt our next port of call was to Puerto Chacabuco. This is a small port from where you can explore the wild and remote forests of Patagonia. This area receives a high annual rainfall which is why it is so green. We were fortunate that we had an unusually sunny day as most of the time it is raining in this region.

The ship docked at Puerto Chacabuco which is located in Fjord Aysen. There seemed limited options to explore the area independently so on this occasion we decided to book an excursion with the ship. It wasn’t cheap at $69 each for 2.5 hours but at least it would allow us to experience some of the beauty of the region.

After getting another tender boat and before starting the tour we walked the short distance into the small town of Chacabuco and had a coffee in the Lobelias Del Sur hotel. This is where we experienced one of the biggest rip off’s of our 2016 travels! We ordered a coffee each and asked if we could use the wifi. We logged onto a wifi network prefixed with the word ‘FREE”. When it came to paying for our two coffees, the advertised price was 2200 pesos (around $2). However we were charged $10 each because we had used the so-called FREE wifi!

Upon our query the smug coffee shop lady pointed to a blackboard located just outside the coffee shop door which stated ‘Coffee + wifi = $10”! This is the first time we have EVER been charged for wifi in any hotel or coffee shop during the entire year we have been travelling! This blackboard obviously only appears whenever a cruise ship is in town! Something else to keep in mind for future ports of call…

So it was approaching 13:30 and time for our short excursion into the wilds of Patagonia… The tour was 30 minutes late in starting however when the bus finally arrived we duly boarded along with the other passengers.

The bus drove through the spectacular green and rugged landscape with hundreds of gorgeous purple lupins and bright yellow buttercups dotted in the lush green meadows through the valley and following the Rio Simpson. After an hour or so the bus stopped at the Rio Simpson National Reserve. 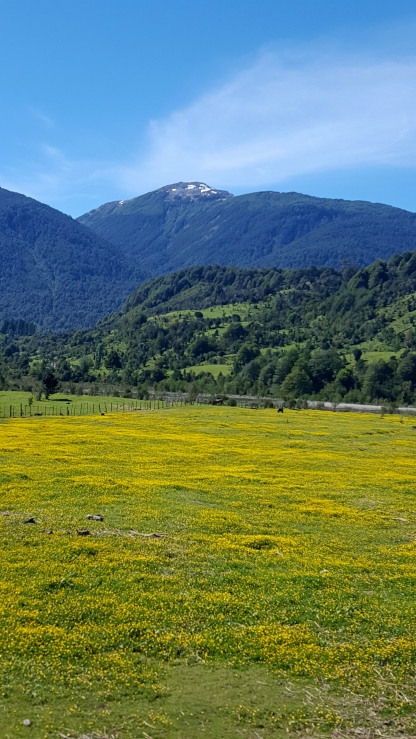 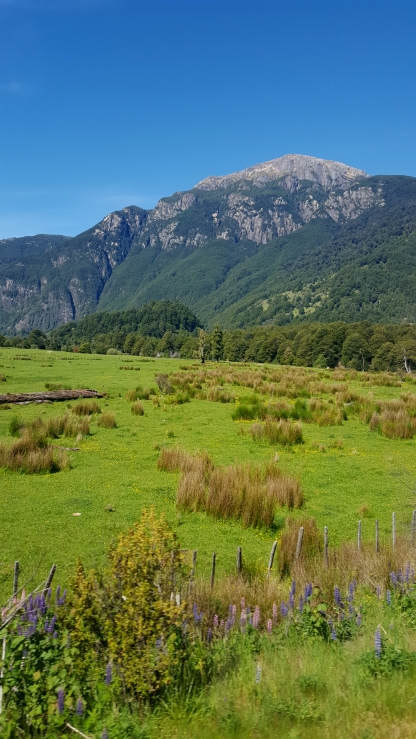 The Rio Simpson National Reserve is located between Coyhaique and Puerto Aysén and contains a small museum, wildlife observation and has activities such as horse riding and fishing available.

Our guide took us into the museum where we learned about the natural fauna and flora of the region. For example black necked swans and the endangered giant condor are present in this part of southern Chile. We were also informed that apparently the buttercups were introduced to the region by the English and the lupins came from Spain.

From the museum the guide led us to the edge of the Rio Simpson where we were able to take some photographs of the cool clear water as it flows through the emerald valley.

Following a 10 minute bus ride our next stop was to a small waterfall. This was packed with 4 or 5 bus loads of tourists, mostly from our cruise ship! While the waterfall was pretty it was to be honest fairly average (maybe we now a little spoilt and blaze after seeing several waterfalls this year). We were both a little uninspired and couldn’t get near because of the crowds so zoomed in for just one photo (as above).

The bus drove back through the rugged scenery to the final stop which was just 10 minutes in the town of Aysen.  Aysen seemed a pleasant sort of town but with only 10 minutes there it wasn’t really long enough to form a view!

As the excursion was 30 minutes late in starting it got back late to the ship which delayed the ship leaving on time. This is an advantage of a ship excursion… if its late, the ship has to wait… if you book an independent shore excursion which runs late you risk missing the ship… what a nightmare that would be as you would have to make your own way to the next port of call to rejoin…

It was lovely to experience a glimpse of Patagonia but our initial thoughts were that was nowhere near enough to fully appreciate it. We were starting to wonder if this is what cruising is all about… you get a small peek at places but not really enough time to fully explore and appreciate them in any sense of depth…