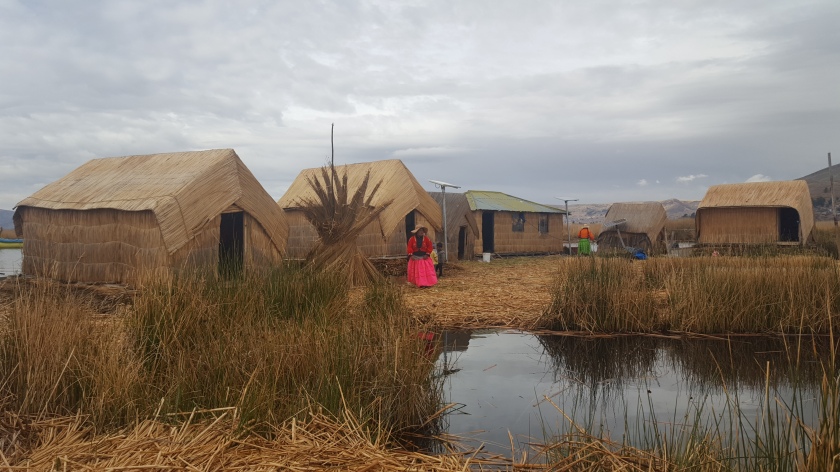 Lake Titicaca, the largest lake in South America is located high in the Andes between Peru and Bolivia. At 3800 meters it is often referred to as the ‘highest navigable lake in the World’ which basically means the highest ‘big’ lake.

We took a tour of the lake while staying in Puno although Copacabana in Bolivia is another popular place from which to take tours. The main tourist island from Copacabana is ‘Isla del Sol’ where tourists can stay overnight to get an experience of life with the indigenous people.

We were collected from our hotel at 7 am, wrapped up well in a somewhat chilly temperature of about 5 or 6 degrees. After collecting other passengers we arrived at the dock to board the boat. Having not really done much research and having booked the tour ‘by word of mouth’ we didn’t have much idea of what to expect!

After 20 minutes or so we arrived at our first stop, the floating islands of Uros. We tentatively stepped off the relative security of the boat and onto islands which are actually made of reeds! This felt surreal with a soft, spongy and wobbly feeling as you can feel the water slightly undulating beneath you!

We were given an explanation by indigenous folk who actually live on the island. While they make money from showing their way of life to tourists and selling their handicrafts they really do live on these floating islands! 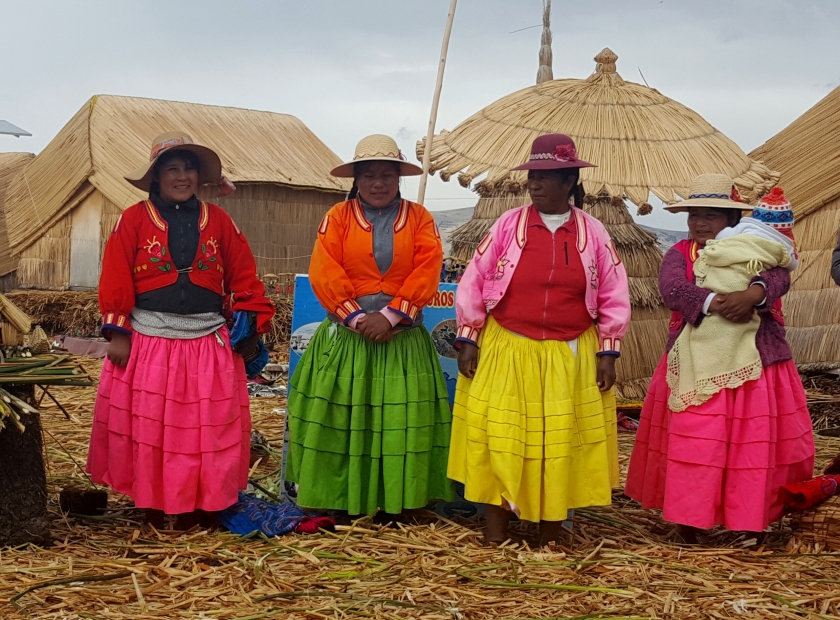 The ladies wear traditional colourful outfits made of many layers of thick materials as it is so cold on the lake. 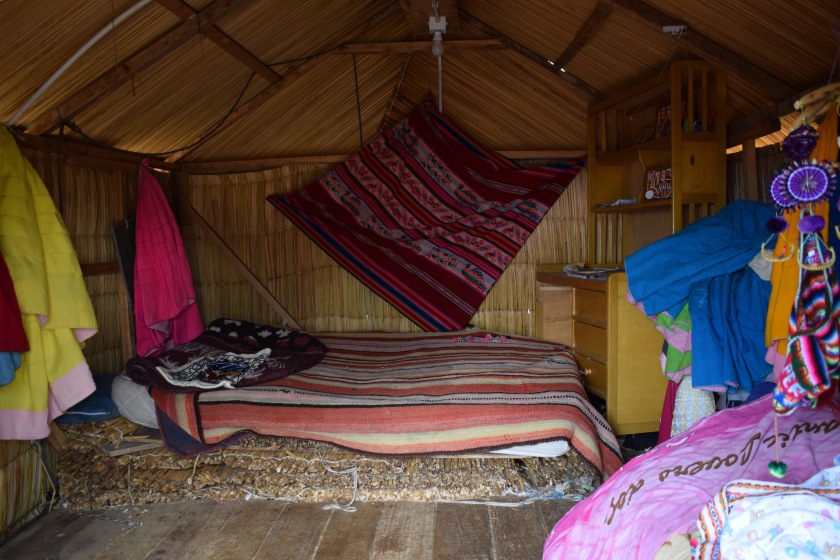 After a short demonstration of the Uros way of life and explanation that almost everything was made from reeds, we were shown inside the reed house of one of the families. The house felt snug despite the cold outside.

The islanders use solar panels as their source of electricity and eat fish caught from the lake. You also see the odd bird running around as these are kept for their eggs. 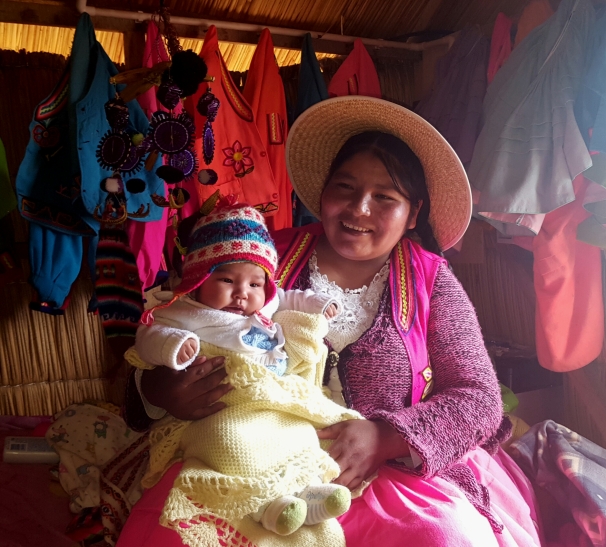 The lady above is pictured with baby Juan, her 4 month old son. Her older child was at school, a short distance across the lake on another larger floating island.

For an extra 10 Peruvian Sols (£2.40) each we had an optional ride on a traditional boat made from reeds (above).

This took us to one of the ‘main’ floating islands which had a coffee shop and a recreation area. With a cup of coffee we tried some local bread made on the islands.

Next we were back on our tourist speed boat and driven for about one hour 20 minutes to Taquile Island, a ‘solid’ island in the middle of Lake Titicaca. The sun was starting to shine and it began to feel much warmer. This is an interesting article on Taquile Island. 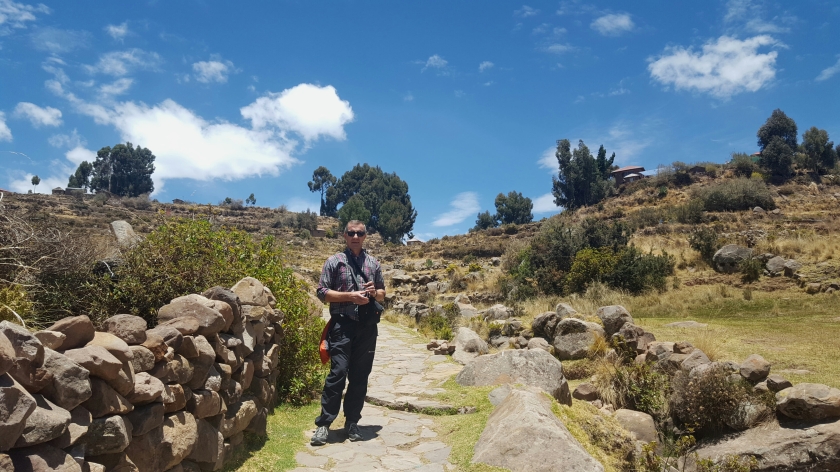 Upon arrival at the island we had a steep 20 minute uphill walk to the top of Taquile Island to a central square. This was a busy little place with traditionally clothed islanders sitting around the edge or going about their business. 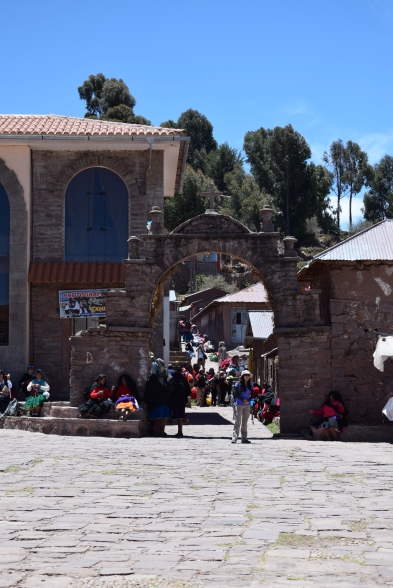 At the square we had 30 minutes of free time. All of the locals dress in traditional clothing again this is not put on for tourists. The children are wrapped up warm like little bundles. Our tour guide explained that residents of the island are happy to pose for photos if you give them a small fee in return. Although this felt strange to us and we felt a little uncomfortable asking we thought that this was a positive thing to do.

There were a few stalls and shops and a centre for knitting. On this island, it is the ladies who weave the wool and the men who do the knitting!

From the square we had a pleasant 40 minute walk a short way around the island where we were given a delicious lunch of vegetable soup and freshly caught fish from the lake. This is typical island food as the islanders don’t eat meat.

After lunch we had a short demonstration of the local clothing where the guide explained that married men wear hats resembling a floppy nightcap with stripes of vivid colours, whilst unmarried or widowed men wear similar hats but are mainly white towards the bobble end! All such clothing is woven by hand, often with intricate patterns.

Our day ended back in Puno at around 4 pm with a thunderstorm!