Granada is a colonial city on the shores of Lake Nicaragua. Upon arrival during late afternoon our tour guide gave us a few warnings:

We were also told not to give food or money to beggars or even child beggars. There is a huge drug problem in Granada which fuels the crime issues.

We didn’t see any but apparently it is common to see children roaming the streets with obvious drug and alcohol problems in Granada. The atmosphere away from the main square was decidedly shady and this was the only place in Central America where we didn’t feel particularly safe. However, just to be clear, this was only a night time issue. The streets felt fine during the day.

Marial, the tour leader of our Intrepid group of 12 took us to the main square and the ‘eat street’ of Granada which she said was fine and relatively safe even during the evening. We found a pleasant outside restaurant however had both children and dogs hovering around waiting for food scraps. Many of the restaurants, ours included, gather the food leftovers and place them on a table so the local kids can help themselves.

In terms of tourism Guatemala seemed to be a little more advanced than Nicaragua. Guatemala is working hard to attract tourists in order to boost their economy and has armed guards in bank and shop doorways and community police and tourism offers visible on most streets. Other than at ATM’s we saw little of this in Nicaragua.

We had two nights and one full day in Granada. During our full day the group of 12 Intrepid travellers participated in a tour which included a boat trip on Lake Nicaragua, a bus tour around the city, a relaxing afternoon by the lake and a fantastic view of the bubbling liquid lava of the Nindiri volcano crater!

During our boat trip on Lake Nicaragua we noticed many homes of rich people where for around half a million dollars you can buy one of the 365 islands and build yourself a luxury retreat.

In total contrast, the poor live side by side with the rich and we witnessed people doing their washing in the lake. Above is a photograph of a young girl who was washing her hair in the lake. She rubbed the shampoo in then in order to rinse it off she dived into the water with the grace of a small mermaid. 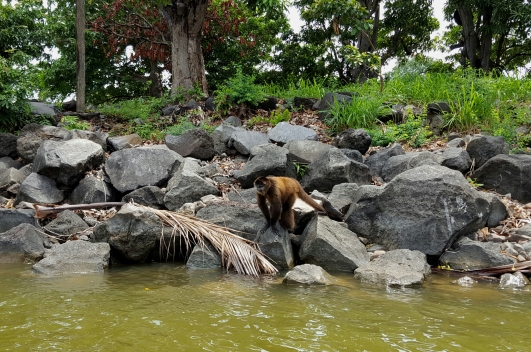 One of the islands is a monkey sanctuary with five spider monkeys. The island was set up by a Nicaraguan vet as a sanctuary for rescued monkeys.

We had a short visit to the Granada cemetery which contains the elaborate tombs of six Nicaraguan presidents.

There have been no trains in Nicaragua since 2006 however the original station building still remains in Granada.

We spent the afternoon at the Laguna Beach Club where some of the group participated in paddle boarding and kayaking. Our guide provided 5 gallons… yes 5 gallons of some kind of tequila and fruit juice punch! This was between 11 of us… So we had a good afternoon!!

Now for the absolute highlight of the day or even in fact one of the top highlights of our world tour of 2016… Above is the view we had as we peered down into the Nindiri volcano crater bubbling with liquid lava! This was one moment where everyone in our Intrepid group felt completely in awe… to peer into a crater and watch the swirling mass of liquid lava was an incredible moment and surpasses the crater view we had at the Hawaii Volcano National Park in January this year where we felt lucky to see the crater from a distance.