Makarska is located on the mainland of Croatia nestled snuggly between a backdrop of craggy mountains and the crystal clear Adriatic Sea. Part of the Dalmatian Coast, Makarska is around 60 km south of Split and 150 km north of Dubrovnik.

The highest peak which towers over the town is Mount Biokovo (5,770ft). Croatia has many islands and the large islands of Brac (pronounced ‘Bratch’) and Hvar (pronounced ‘Var’) can be seen on the horizon.

Catering for different generations can sometimes be tricky however throughout the week we managed to find a range of activities to suit everyone:

There is a wide range of activities available in Makarska. Coastal walks are popular and wind their way through fragrant pine forests next to small, pebbly beaches.

With few people around and clear crisp air, early morning is a lovely time for a walk around Makarska. Our apartment was a mile or so from the old town of Makarska and one morning I (Laura) made my way around the Peninsula of St Peter, a small headland at the port of Makarska. 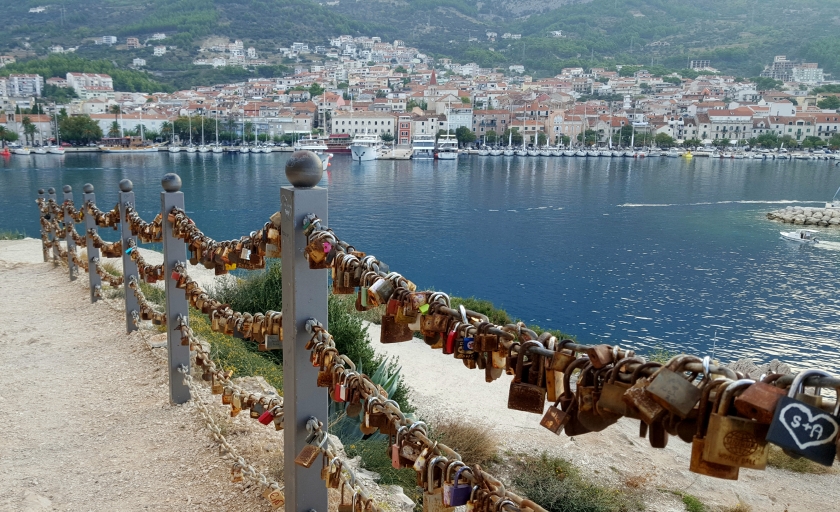 As I made my way past St Peter’s Church around the peninsula I came across the ‘love lock’ railings where sweethearts declare their love by locking a padlock to the railing!

Cycling is another popular activity and another day the 7 of us rented a bike each for 3 hours, (Annabelle and Elliot were not present for this team photo!). There are several cycle hire places along the main strip and our cost was around £5 each. There were no helmets, deposits or forms to fill in… just choose your bike and go! 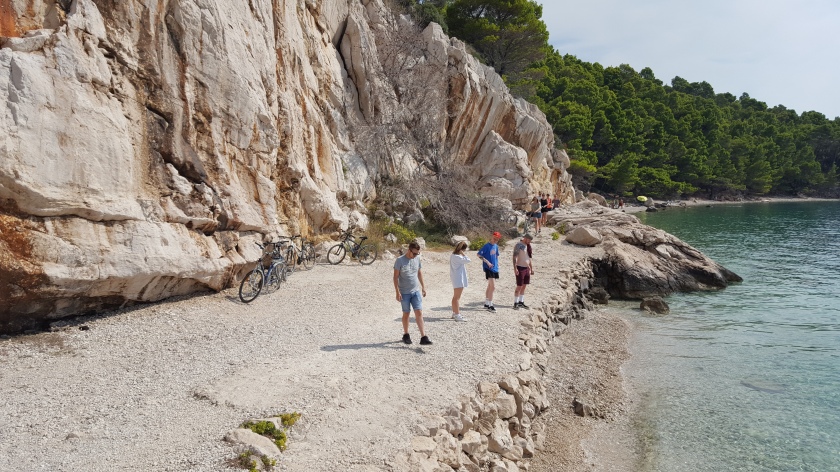 From Makarska we made our way north towards Brela, along the main promenade (dodging holiday makers) and then after a mile or so, through the pine forests. The cycle and walking path are the same thing and cycling got a bit tricky in certain places! Bumping over tree roots through the forest and jutting out rocks as we cycled next to the cliffs.

With temperatures in the region of 28 degrees it was soon time to dismount the bikes and cool off in the sea!

As we clattered along the rocky path we came to Krvavica a tiny resort with a marina and handful of bars and restaurants. This was also home to a large abandoned building which, from 1964 until the Yugoslavia war in 1991 had been a rehabilitation resort for children with lung disease. Since then the building has been empty and has become derelict. The building is completely open with no fences or gates to prevent entry so you are able to wander around if you wish.

We spent so long in a bar adjacent to the sea that we didn’t make it further than Krvavica before we had to turn round and cycle back to the bike hire place! 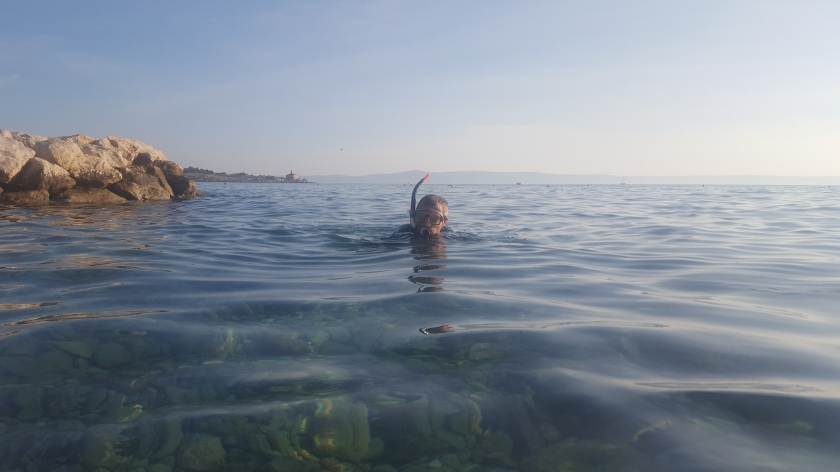 The clear warm sea is pleasant for snorkelling however there wasn’t a great deal of fish! 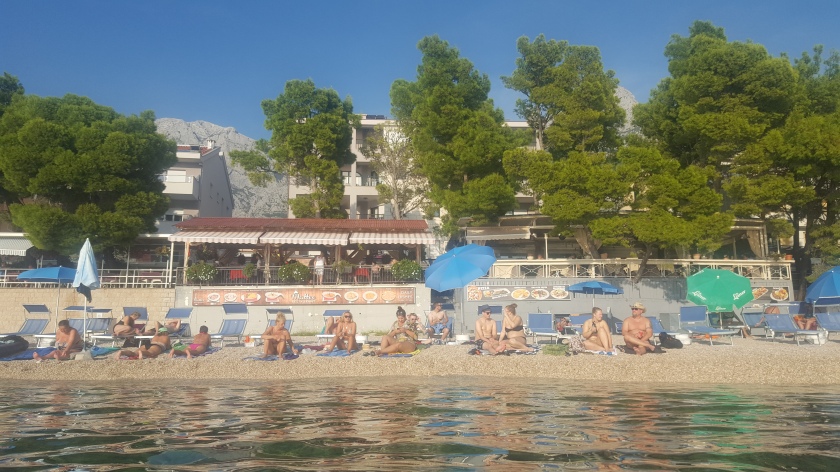 The beaches which line the resort of Makarska are narrow and pebbly and get busier the closer you get towards the town.

The sea is so calm and sheltered that water sports such as jet skis and paragliding are popular. A 10 minute ride on a jet ski is around £20.

This long paved promenade stretches for a couple of miles and is lined with bars, cafes and restaurants so you are never far away from something to eat or drink. Those on the left of the picture overlook the sea.

We had several evening meals in restaurants along the promenade and this was the location for our morning coffee and toast (that’s Chris and me) while the younger generation were still in bed! And this was when the above photo was taken, before the crowds appeared!

Some bars have seating areas which are right next to the sea! This bar also has a row of wooden sun loungers with cushions. 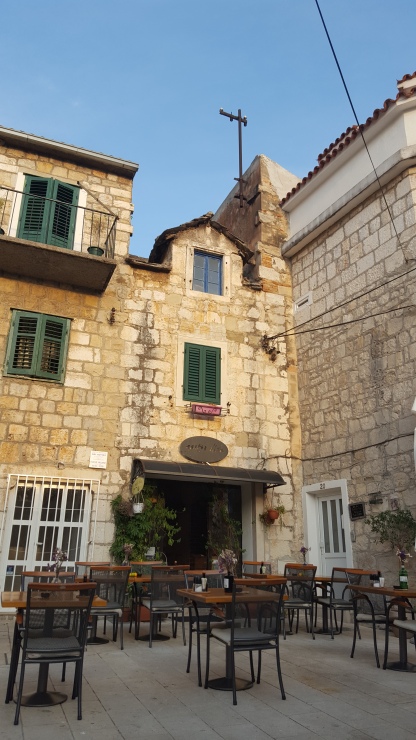 The Old Town of Makarska was picturesque with quaint little shops, museums and restaurants. The photo on the right above was the Stari Mlin restaurant where we had one of our meals one evening.

The Old Town has a lovely square called Kacic Square which was pleasant for a wander around both during the day time and in the evening.

The nightlife of Makarska is fairly low key although both in the Old Town and along the promenade for over a mile there were several late night bars and beach parties.

The weather during our visit in the third week of September was perfect with the first 6 days being around 28 degrees and sunny. The last day however was a different story! At around lunchtime dark clouds began to appear and before we knew it, gale force winds were upon us!

We stayed at the Apartments Mario which was the perfect choice for our group of 7. We had 4 apartments between us which were all located on the top floor of the small apartment block. Each room opened into a large sunny communal kitchen area with a balcony facing towards the sea. There is a 24 hour bakery across the road and a supermarket nearby. We booked with booking.com however it is possible to book direct.

So around £220 per person per week for the flight, accommodation and airport transfers. With food, drinks and entertainment being extra.