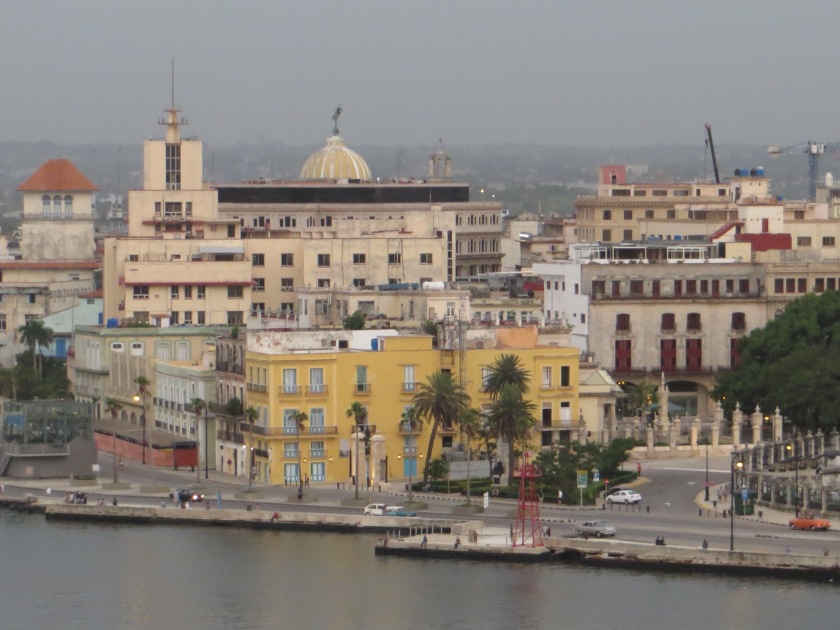 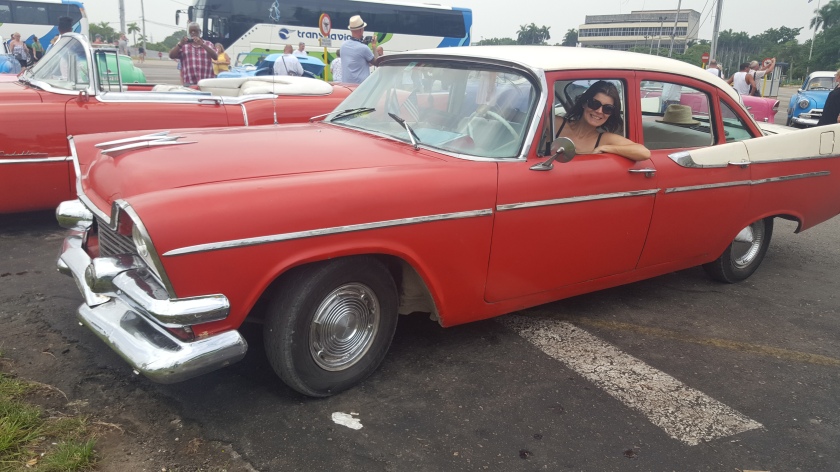 Yeah… Havana ooh na na… love this song by Camila Cabello and as well as providing inspiration for my post title, its sultry laid back tones really captures the essence of the day my friend Bridget and I spent in heavenly Havana…

So… Havana, capital city of Cuba and home to pastel coloured buildings, cobbled streets and an abundance of vintage American cars which date back to the 1950’s. Oh and rum, huge cigars and coffee!

Bridget and I were staying about an hours’ drive to the east of Havana in a small beach resort called Jibacoa. We had booked a TUI excursion whereby a bus picked us up from our hotel at 10:15 am en-route for Havana.

Just 15 minutes later we had our first stop at ‘Oasis Pina Colada’ where, said to supply the best pina coladas in Cuba, we had one each which was served inside a pineapple and made with Havana Club 7 year old rum… bottles of which were left on the counter so you could just top up your pineapple as you wished… what a fab start to the day! 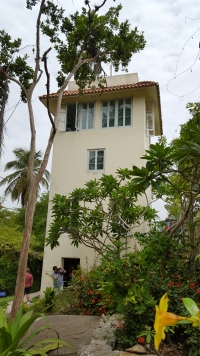 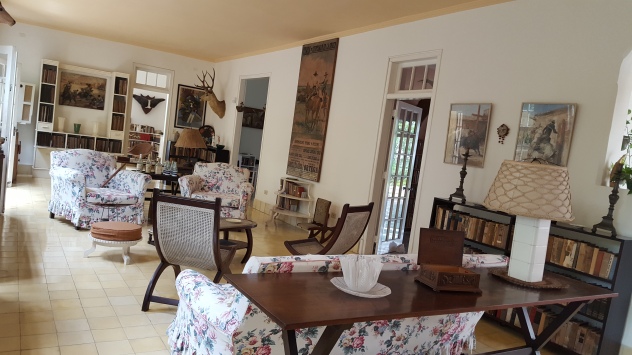 Next was a visit to novelist Ernest Hemingway’s house ‘Finca Vigia’ which means ‘lookout farm’. The house is located on a hill about 10 miles east of Havana and he had a tower built (above pic) where he used to sit in a comfy room at the top as writing inspiration. You are not allowed inside the house but all of the large windows are open and you can stick your head in and have a look inside. Hemingway wrote several of his novels during the 20 years he lived there. 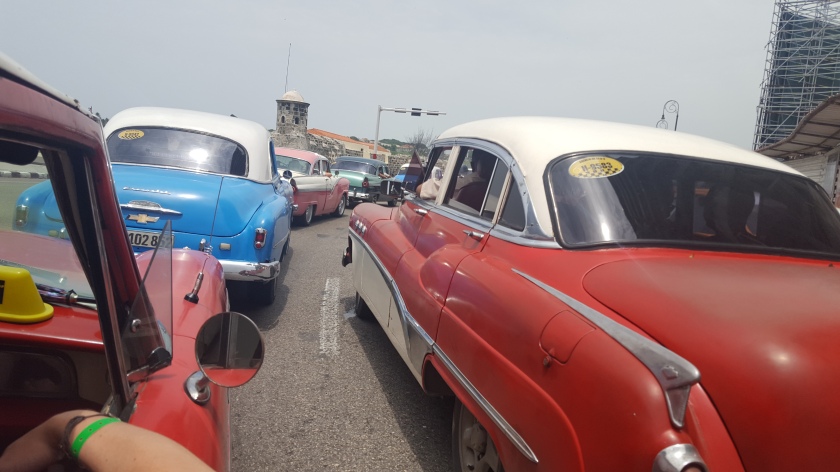 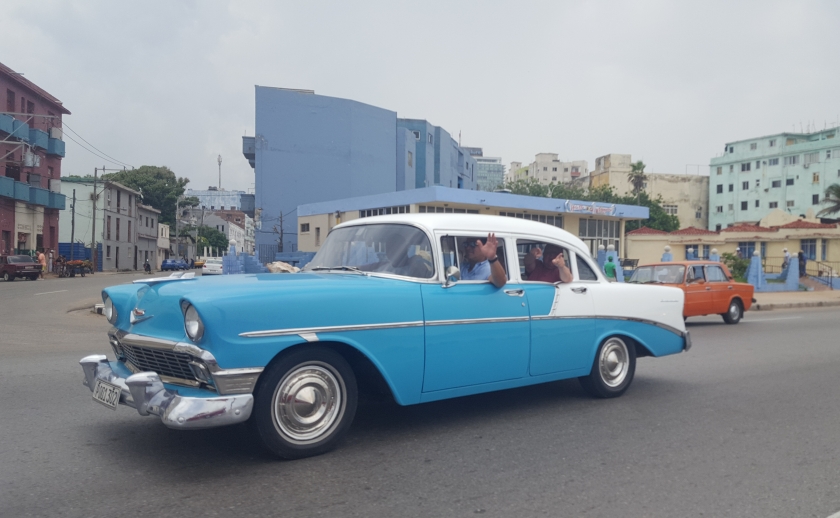 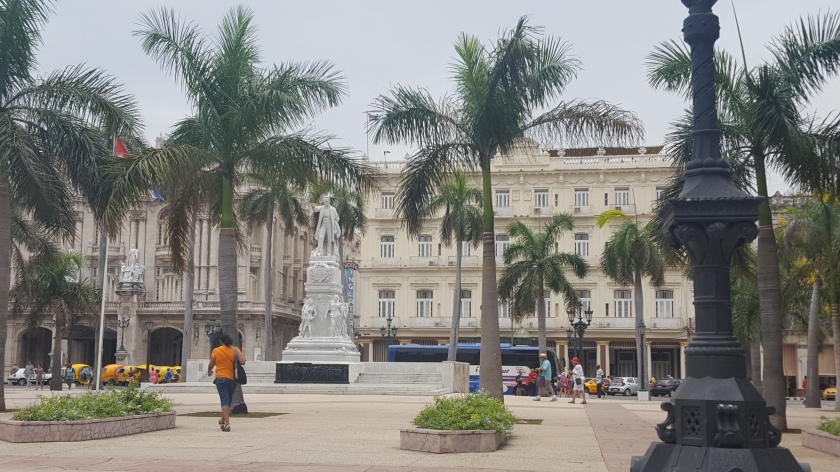 After being provided with a sandwich lunch the highlight of the day… or probably the holiday was a 30 minute cruise around the streets of Havana in a 1950’s classic car!

The classic car ride ended in Presidential Square which has a massive iron image of Che Guevara. This huge square has seen much political activity and is the place where Fidel Castro (former Cuban President) gave many speeches.

We next had a short visit to the Cementerio de Cristóbal Colón which is immense and contains hundreds of elaborate memorials. The biggest is a 23 meter high monument dedicated to firefighters who lost their lives in a huge fire in 1890. 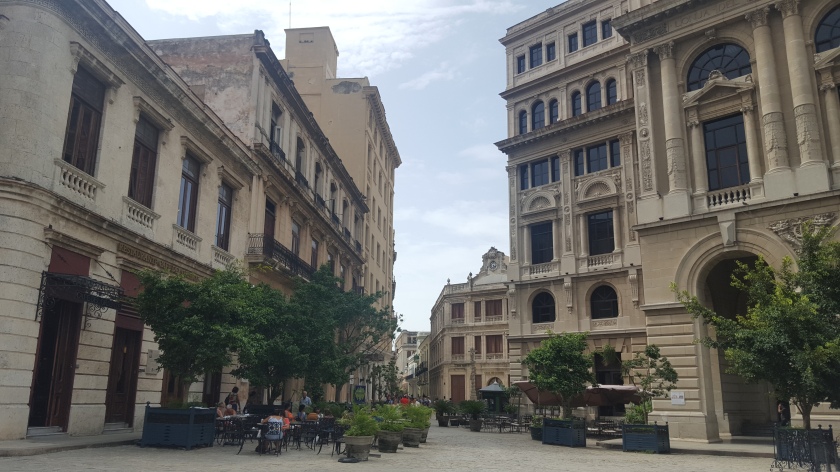 Until now the day had been inflexible and fixed and had meant us sticking with the group… the best bit was the next stage, where, after a short guided tour around the old town of Havana, we were let loose and ‘allowed’ to wander free for an hour or so… yey… thankfully at long last we were able to break away from the group and do our own thing… 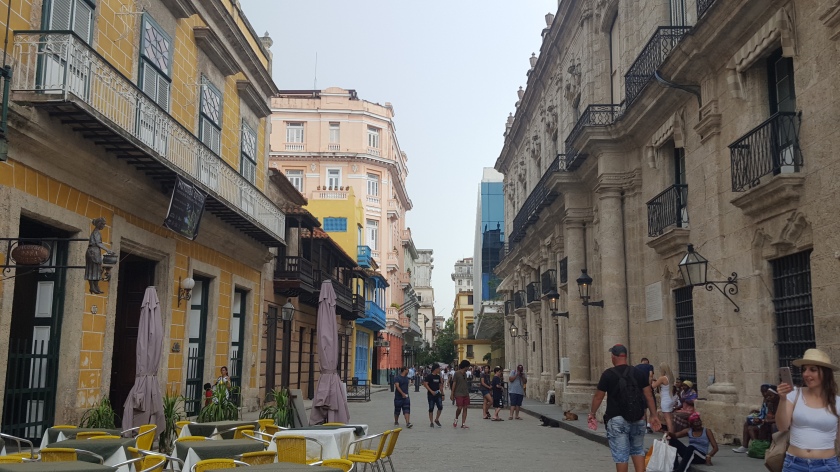 Compared with many other capital cities, particularly those in Central and South America, Havana felt surprisingly safe. You can’t be completely complacent and still have to watch your bag but you would do this in any city including (and especially) in London. I felt comfortable as we spent an hour exploring the Old Town which ended with a drink in the Hotel Ambos Mundos, the hotel where Ernest Hemmingway lived for 7 years… before his wife got fed up and insisted they move to the Finca Vigia house! 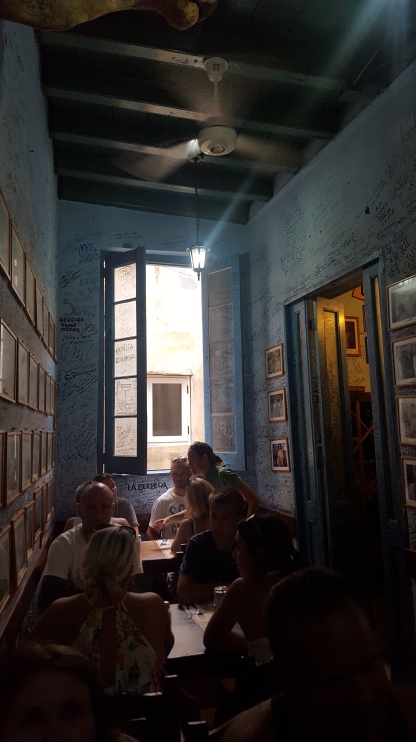 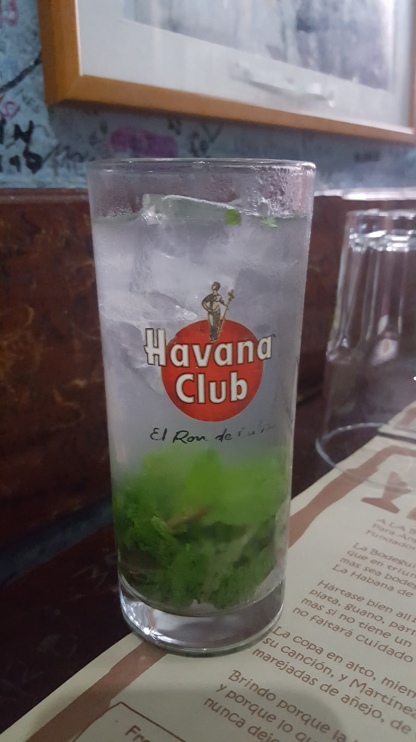 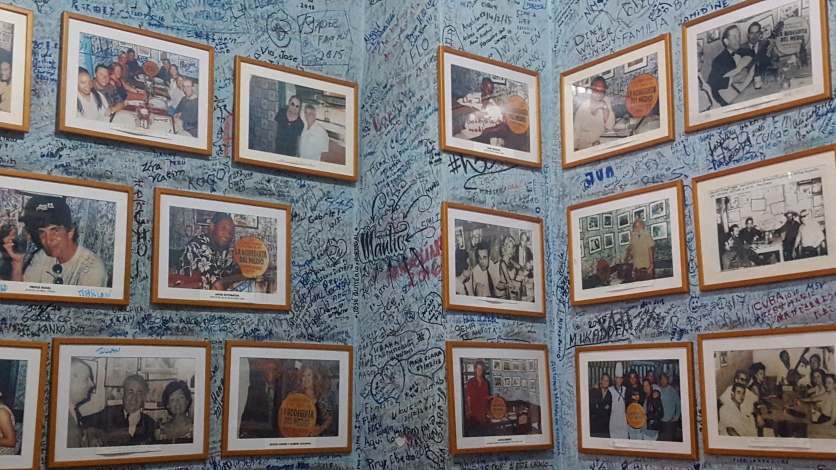 We duly met up again with the group where our tour guide led us to La Bodeguita del Medio which was one of Ernest Hemmingways favourite bars and our dinner location! What a fabulous little place where we had traditional Cuban food with a live band playing Cuban music to us! The walls were decorated with graffiti and hundreds of photos of the many famous past visitors. 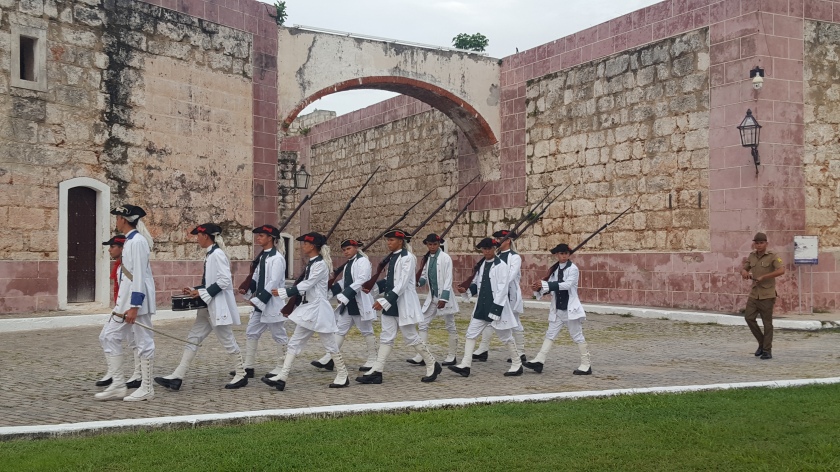 After the meal, the final section of our day in Havana was a trip to the fort where we were ‘allowed’ to go off and spend the next 1.5 hours wandering around by ourselves… the fort was huge and we happily spent our time meandering around the walls, watching the sunset and waiting for the grand finale where at 9 pm every evening the canon fires! 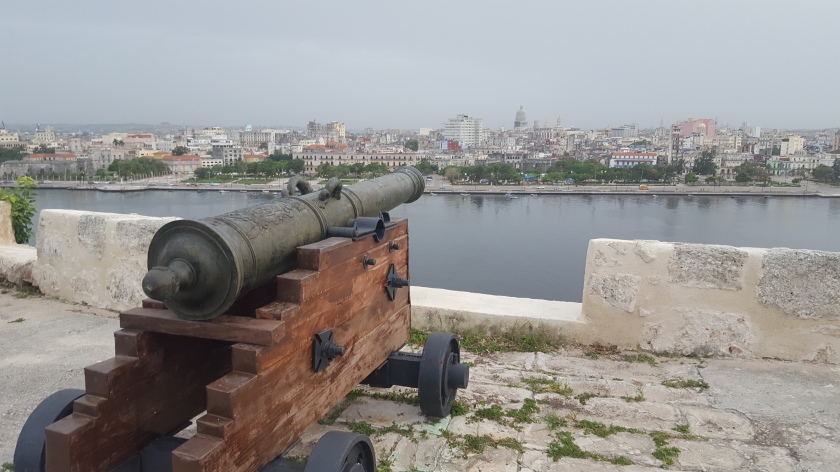 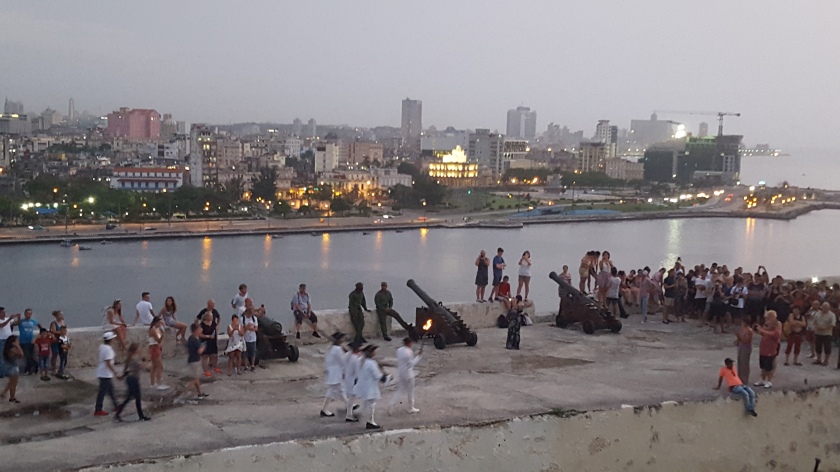 What a brilliant day we had in Havana and this whistle stop tour left me wanting to return to explore properly and at my own pace to soak up the atmosphere for a few days next time… I loved the latin sounds coming from every corner, the quaint cobbled streets and the lively bars and restaurants.