Being busy with work Chris was unable to make this trip to Montenegro, the stunning little former Yugoslavian treasure. This post therefore focuses on my experiences as a solo traveller on a short European break!

Other than the odd work trip this was only the second time I had travelled completely alone and independently since I had a long solo weekend in Athens in January 2007.

Montenegro was originally named by the Italians and means ‘black mountain’. As mentioned, Montenegro was previously part of Yugoslavia until the war of 1992. Following the war, Montenegro was joined with Serbia before gaining full independence in June 2006.

Following a crack of dawn EasyJet flight from Gatwick to Tivat I had arrived at the new and modern Hotel Helada by 11 am. I was thrilled to find this was the perfect choice for me: close to the airport, clean and spacious rooms, a bar and restaurant onsite and a few luxuries such as a huge bed, brilliant shower and comfy bathrobe and slippers!

Tivat is a small modern town with a lovely marina which is lined with outdoor cafes and restaurants. Having been allowed to check into my room on my early arrival I decided to familiarise myself with my surroundings with a stroll around Tivat and a glass of chilled Chardonney at one of the outside cafes. I walked for about 3 or 4 miles along the coast and past the small pebble beaches and into the town before turning back to my hotel. 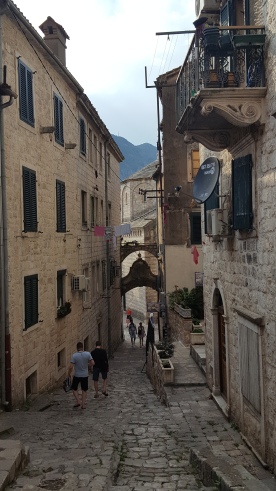 A friend had previously suggested that Kotor (above) would be a lovely place to visit. As Kotor was just a few miles away, the hotel called for a taxi and for 10 Euros I was soon on my way passing through the mountain tunnel and entering the delightful town of Kotor.

Located in the Gulf of Kotor and in complete contrast with Tivat, Kotor was an old walled mediaeval town with cobbled streets, narrow alleys and old churches. It was absolutely gorgeous and I explored the scenic streets with a spring in my step and a huge grin on my face! 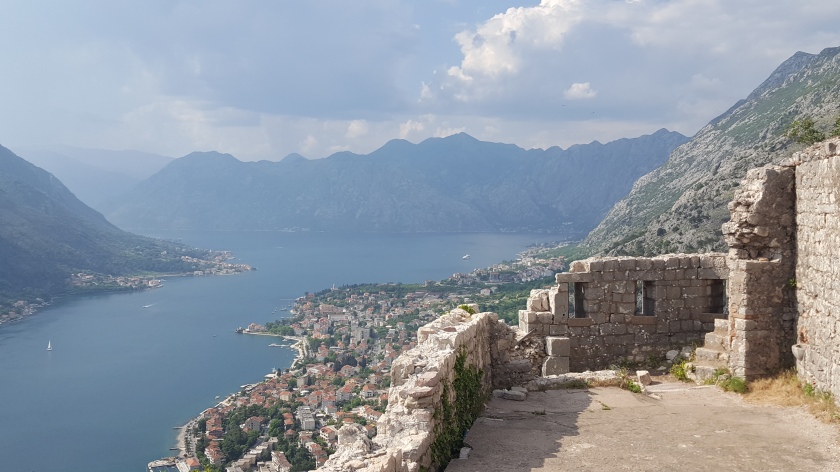 Towards the back of the old town you can pay 8 Euros to enter the ruins of the Castle of San Giovanni where you can climb 1350 steps to the top! This was one of the highlights of my trip and offered breathtaking views over the Old Town and across the bay.

I hadn’t had any lunch so feeling hungry after my energetic climb up and back down from the castle I enjoyed a healthy tuna salad in one of the outside cafes overlooking a lovely little square.

For my second day, rather than getting a taxi I took a local bus from Tivat bus station to the seaside resort of Budva. The journey took about 30 minutes and was around 3-4 Euros each way.

With a weather forecast of rain at midday I had an early breakfast and was on my way to Budva by 08:30. Budva was larger than Tivat or Kotor and whereas Tivat is modern, Kotor is quaint and historic, Budva had a real ‘resort’ feel to it.

Like Kotor, Budva had a historic Old Town with even narrower streets, again filled with shops selling local produce, bars and restaurants.

I followed the coast round and walked along past the sandy beaches until I reached the headland at the end. At this point, I turned back and re-traced my steps, back through the Old Town, back along past the marina and through a modern shopping center for a couple of miles heading towards the bus station.

Thankfully there was no sign of any rain and before midday I was back at Budva bus station with the intention of taking another bus up to Cetinje, the old capital up in the mountains of Montenegro. Unfortunately the mountain road was closed and there were no buses, so I duly made my way back to Tivat.

For the rest of the afternoon I decided to have another wander around Tivat and planned a 5 mile circular walk which started along the coast and then wound its way back through the town. About half way round I came across the Waikiki Beach Bar and soon really felt like I was on holiday as I enjoyed lively music and a delicious Greek salad washed down with a margarita!

As I made my way back through the town towards my hotel, the sky turned rather sinister looking as dark grey clouds were forming over the mountains. As I reached the park, large random spots of rain began to fall although the sun was still shining!

I had dinner in my hotel that evening and not wanting to sit alone in my room I decided to sample the local brandy to end the meal… There are different types of Montenegrin brandy and I chose the plum one which sounded tasty. Wow… this was so strong it took me about half an hour to drink it and there was no way I could taste any plums!

While in Kotor on Monday afternoon I had wandered into a small travel agency looking for an excursion. Following a short email exchange on Tuesday I had booked myself onto a tour to Lovćen national park.

The mini bus picked me up from my hotel at 09:30 before collecting a young couple from Macedonia and a middle aged couple from Yorkshire in England. The 6 of us (including the driver) set off up the steep mountain roads for the stunning drive to Lovćen. The driver made plenty of photographic stops as we twisted and turned up the hairpin bends or the ‘serpentinies’ as he called them! We drove through the clouds which meant the views were not as good as they usually are…

Jezerski peak was our destination and is the site of the impressive Njegos mausoleum, the burial place of Petar Petrović Njegos, Montenegro’s most famous writer. You need to climb 461 steps to reach the mausoleum and peak of the mountain.

Just behind the mausoleum you can walk along the above ridge where you are rewarded with stunning views across Montenegro. On a clear day apparently you can look out across the Adriatic and see Italy.

From the mausoleum our driver took us into one of the mountain villages where we were fortunate to sample local black wine (20% proof), local brandy (50% proof), local cheese and local ham. Being a mostly vegetarian/vegan these days, I gave the ham a miss but did enjoy the unlimited wine, brandy and cheese! This proved to be a lovely boozy bonding session with my fellow middle aged travellers, Steve and Jo.

We arrived back in Kotor and Tivat at around 4.30 pm when I had a short walk to the local supermarket, another trip for coffee in the marina and a delicious pasta dinner in the hotel! (But no more brandy this time…)

Reflections on solo travel in Montenegro

The first and only other time I had travelled alone I had returned with a huge sense of achievement and a massive boost of confidence; the type of confidence where you feel you can conquer anything! This time, probably as I am now 11 years older and probably more confident anyway, I didn’t feel the same sense of achievement… this time I felt that I had been on a brilliant little adventure which had injected a tad of excitement into my everyday life.

I adore travel of any kind and love travelling as a couple, with my daughter or son, friend(s), family or in a group, large and small… all offer different experiences and all have pros and cons.

Not once did I feel isolated or lonely or fed up… this might have been helped with the social media available today… in 2007 I didn’t have Facebook so didn’t have anyone to share my experiences with. During this short break I put photos and posts up on Facebook and was interacting in real time with family and friends. This gave me a sense of having someone to share my mini adventure with.

While I guess having company is perhaps more ideal, particularly when having a meal, I enjoyed the freedom to do exactly as I wished, chop and change my plans on a whim and not having to fit in with anyone else. At mealtimes, I had my phone and/or iPad for company which meant I could entertain myself by planning the next day or reading my Kindle app to keep me entertained and prevent me from being ‘Billy No Mates’.

And I would certainly recommend Montenegro as a great choice for the solo traveller.