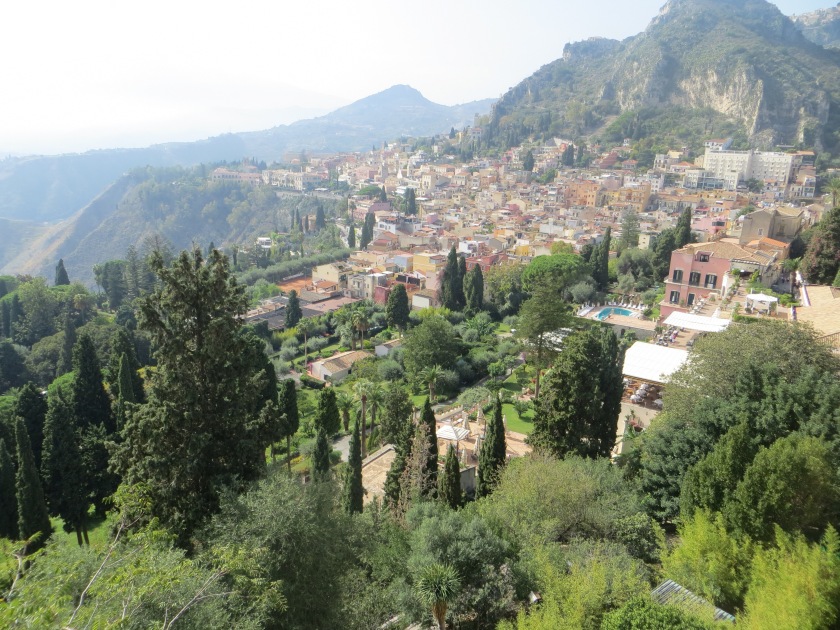 Sicily is an Italian island and in fact is the largest island in the Mediterranean Sea. As Sicily is so large and Chris and I were there for just a week we focussed on exploring a section of the East coast of the island. We flew with British Airways from London Gatwick and stayed in the Hotel Royal in Catania.

Catania is the second largest (after Palermo) city in Sicily and is situated at the foot of Mount Etna. As well as Mount Etna Catania is also a good base from which to explore other captivating towns such as Taormina and Syracuse.

The Hotel Royal is a traditional Italian style hotel in a good location and close to the centre of Catania. It is a little old fashioned but charmingly at home blending in with the local architecture. Even though centrally based, the immediate surroundings are quiet and peaceful. In the evenings you are literally a few meters from some fantastic restaurants where you dine late into the night in the warm and relaxing ambiance. The buffet breakfast with its selection of pastries, cheeses and fresh fruits was also good.

From Catania we travelled to Taormina by local bus which took just over an hour. Taormina is also located on the coast and has a spectacular setting right on the cliff edge and under the shadow of Mount Etna. 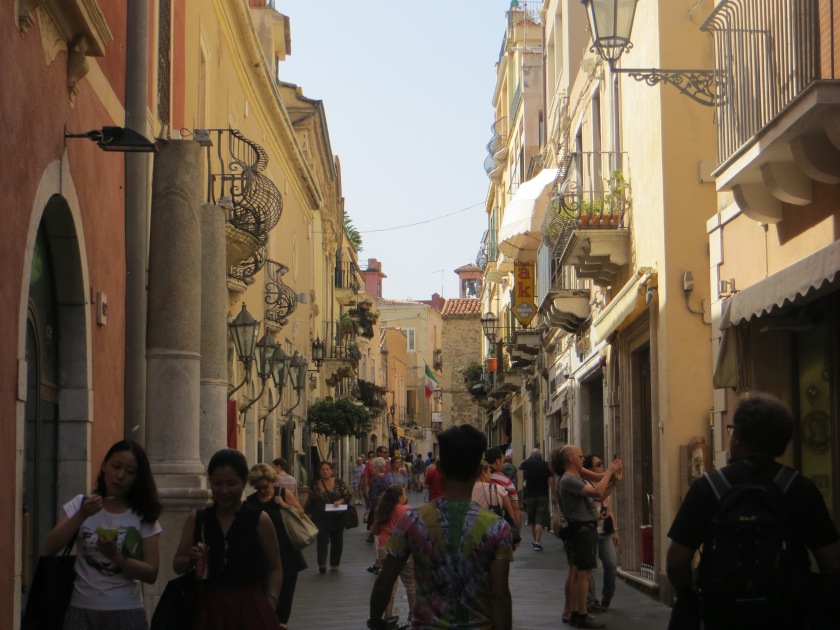 Taormina is touristy and as such expensive but it was a real pleasure to stroll along its mediaeval streets. Being October the streets were less crowded and not as swelteringly hot as they might be during the peak season of July and August.

After a stroll around the charming streets of Taormina we headed towards the Greek-Roman theatre with its breath-taking views.

One of the big attractions of Taormina is the Teatro Antico di Taormina, an ancient Greek-­Roman theatre. Built in the third century BC using Roman brick techniques it was most likely built over an ancient Greek structure. The theatre is still used today for concerts and opera performances.

Above is part of Teatro Greco (there are many references to this theatre being Greek rather than Greek-Roman…). Thankfully we were able to wander around without the crowds you would most likely encounter during peak months.

During the afternoon we took the cable car down the steep cliff to the small pebble beaches of Mazzaro. These were small and crowded and to be honest we preferred the main town above and don’t consider this to be a ‘must do’ while Taormina for just a day.

Mount Etna is Europe’s biggest and most active volcano and apparently the name ‘Etna’ means ‘furnace’ or ‘chimney’. There has been many eruptions over the years with the most recent being on 16th March 2017 which injured 10 people.

Over the centuries past eruptions have destroyed nearby towns and villages including Catania. These lava flows and landslides result in a constantly changing luna like landscape.

There are several ways of visiting Mount Etna some of which involve a significant trek. We took the easy option and booked a tour with the hotel reception. The half day tour took place in a land rover which drove us half way up Mount Etna with the helpful guide explaining the history of the volcano as we went along. 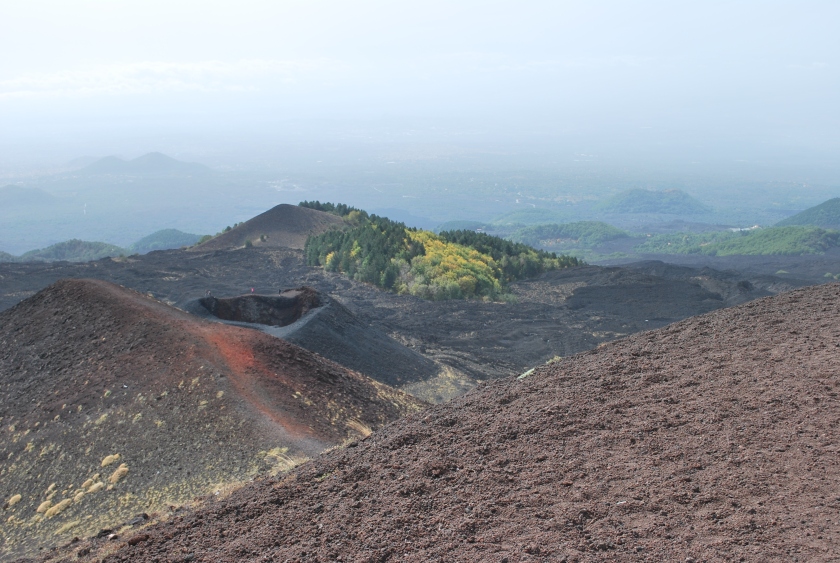 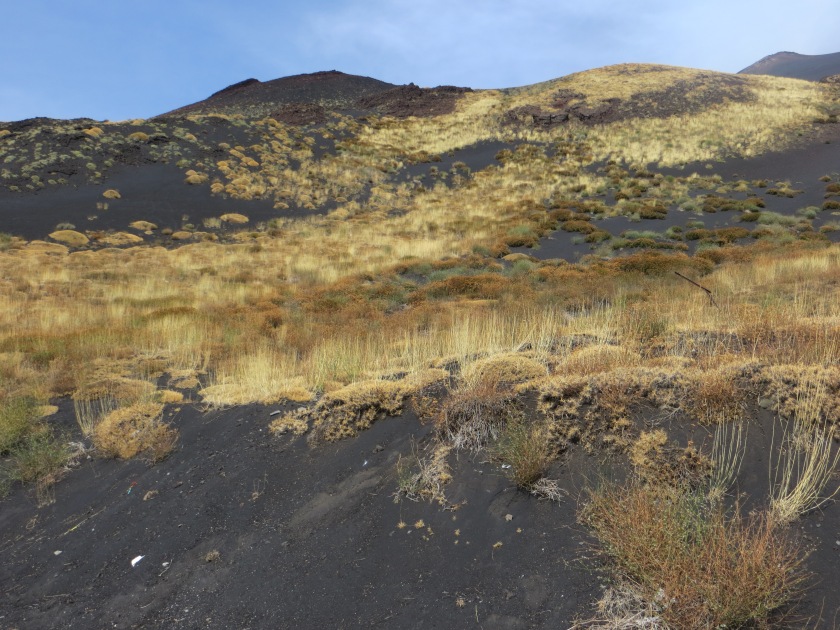 Above is an Arancini which is a Sicilian snack made with rice and often containing ragu (meat and tomato sauce), mozzarella and peas. Typically those produced in eastern Sicily and especially Catania where they are conical shaped (as above) rather than ball shaped. We had these at the end of the tour when the mini bus also stopped at a shop which also sold locally made honey.

Out and about in Catania

With our hotel being centrally located we were able to walk to the main attractions of Catania. The huge and impressive Catania Cathedral was originally built in the mid 11th Century and can be found on the Piazza del Duomo.

The Roman Amphitheatre was built for gladiator battles and could originally hold over 15,000 people. Unfortunately this was destroyed in 1693 by an earthquake. 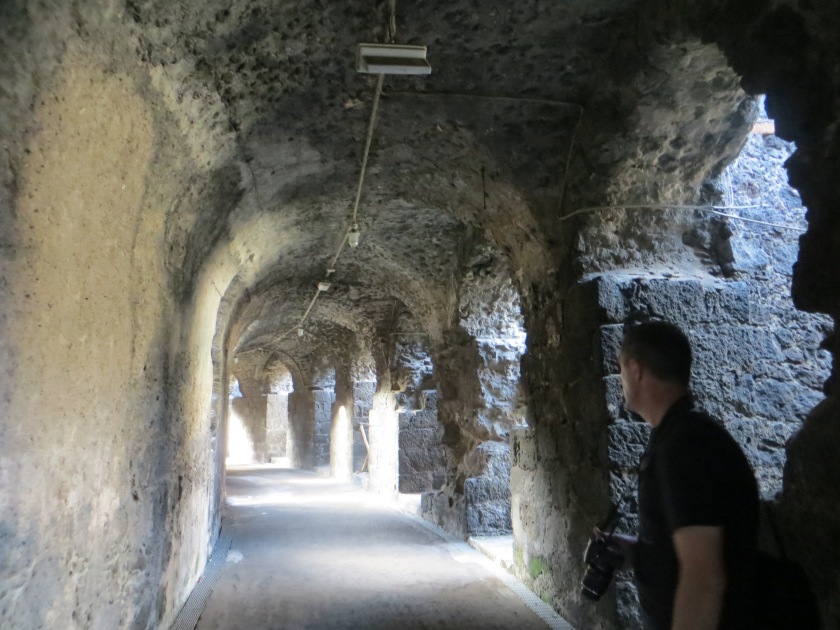 Aci Castello, a Norman castle is a short bus ride about 9 km from Catania. The castle was built in 1076 on what was previously a tiny island until lava surrounded it and connected it to the land!

We had to wait for a short time as the castle closes between 13:00 – 15:00 so we had a coffee in the small square. At 15:00 we paid our entrance fee of around 3 Euros each and climbed the steps up to the castle.

From the top of the castle we had amazing views of the small and peaceful town of Acicastello and the coastline.

One of the best days of our trip was spent in Syracuse, a delightful town with a mix of honey coloured Greek, Roman and Baroque architecture.

We took the 09:30 public bus from the Central Catania bus station to Syracuse, arriving at 11:00. We walked the short distance straight across a bridge and onto the island of Ortygia, which makes up the picturesque centre of the town.

We walked through very narrow streets and soon found a gorgeous little restaurant where we enjoyed a jug of house red (only 4 Euros) washed down with fresh bread, olive oil and local spices.

We continued exploring Ortygia and came across the main square, the pedestrianised Piazza del Duomo. Above you can see a side profile of the stunning cathedral. 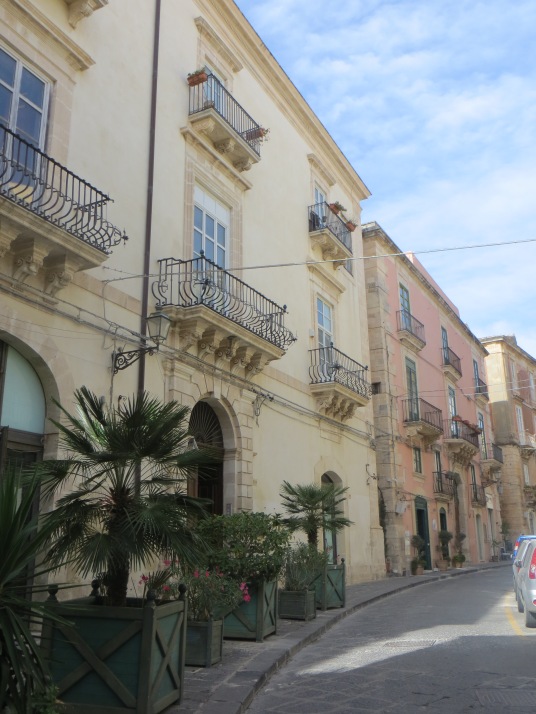 We spent a couple of hours walking through the pastel buildings in the middle and around to the edge of the island which had tiny beaches and people swimming in the sea. 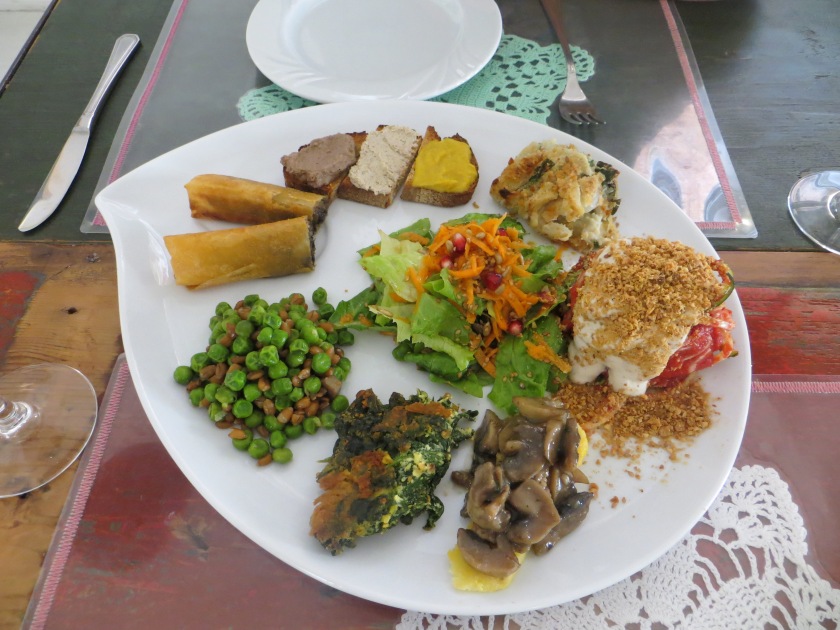 Above is our second delicious snack of the day an amazing vegan platter which we enjoyed in Moon. Moon stands for ‘Move Ortigia Out of Normality’ and is a restaurant, gallery and a ‘place to nourish the body with culinary delights that feed the soul and the imagination’ (according to its website). We loved the spiritual and creative atmosphere and certainly left with a warm fuzzy feeling (which may have also been thanks to the excellent local Syracuse and Etna wines we tried).

Our last activity in Syracuse was a pleasant boat trip which took us around the island and to some nearby caves and rock formations.

For our final day in Sicily we decided on the Circumetnea a small train journey which circumnavigated the base of Mt Etna for 110 km. We headed towards Catania Borga where we purchased our Etna train tickets. Packed with locals and the odd tourist (well… us mainly) the train left the station at 12:22 and we were on our way… 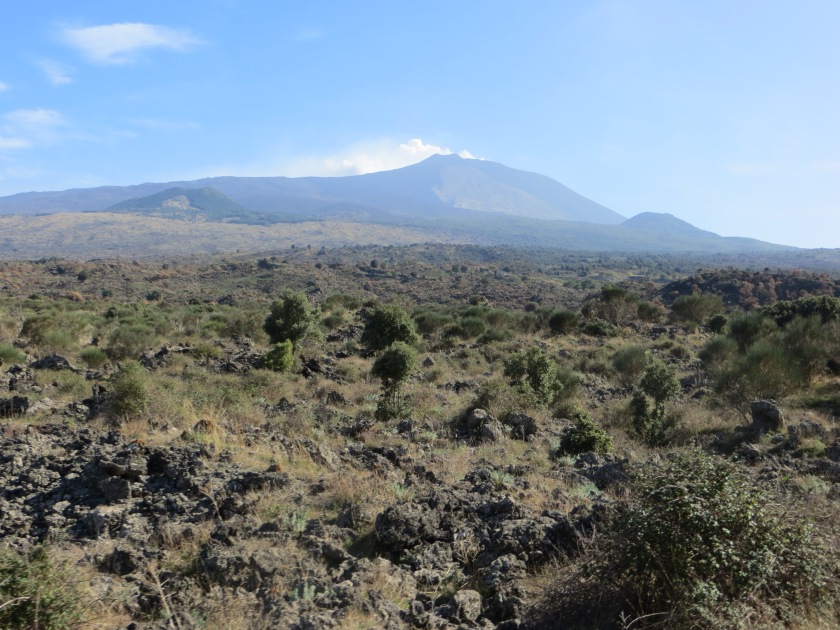 For two hours the train stopped at several stations and the carriage gradually emptied out as the locals disembarked at their stop. Eventually there was just us and an older American couple. 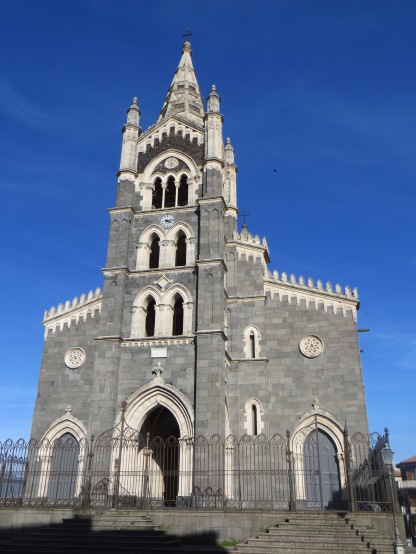 We eventually got to Randazzo (above) where the train terminated. Randazzo was exceptionally quiet as we headed towards what we thought was the centre. 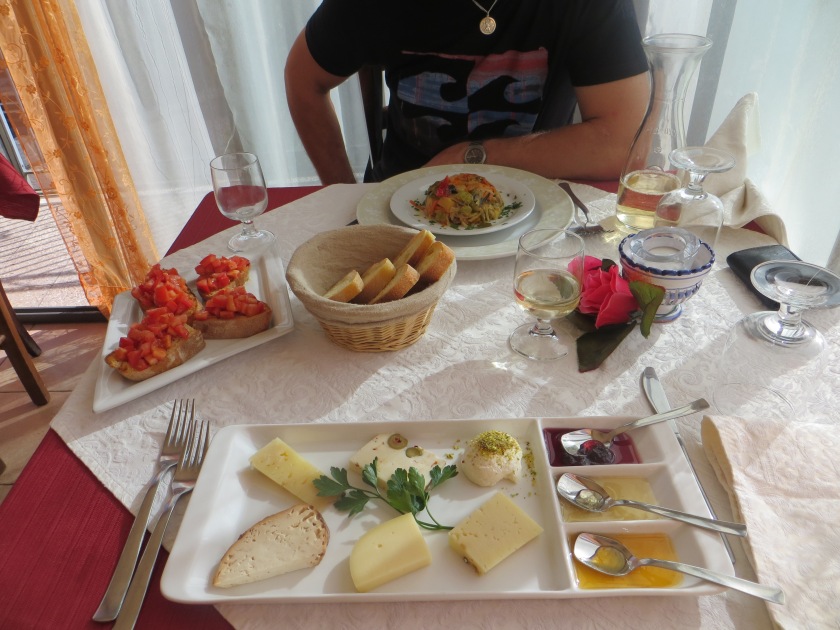 We found a lovely restaurant where we had a typical Sicilian lunch with a half litre jug of refreshing white wine with a selection of local cheeses, local vegetables and bruschetta.

After lunch we had a wander round and came across a procession making its way through the main street made up by what seemed like hundreds of school children being ushered along by their teachers. The quiet afternoon streets were now filled with the distinct sounds of a brass band.

At 1722 we took the small train to Gairre. From Gairre we took the main train back to Catania Central station.

For us, and for a Mediterranean island, this was not a holiday for beaches or snorkelling which, staying in a city doesn’t really cater towards. However, it was a perfect week of culture, exploring natural phenomenons and baroque streets and spoiling ourselves with an indulgence of sumptuous Italian food.