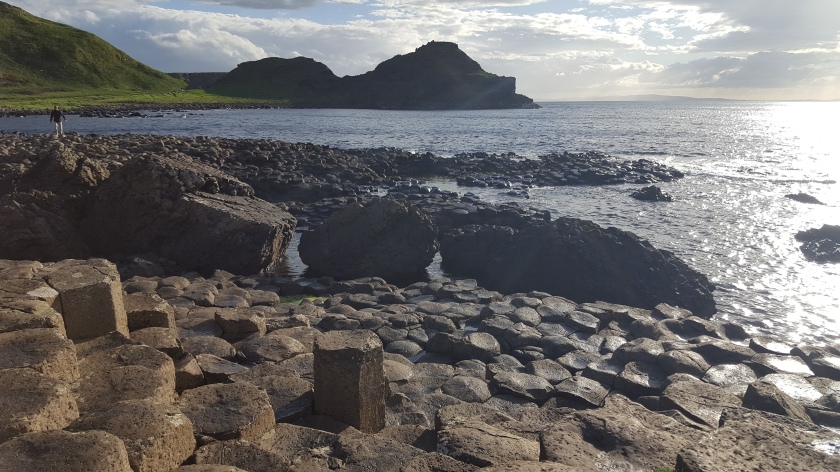 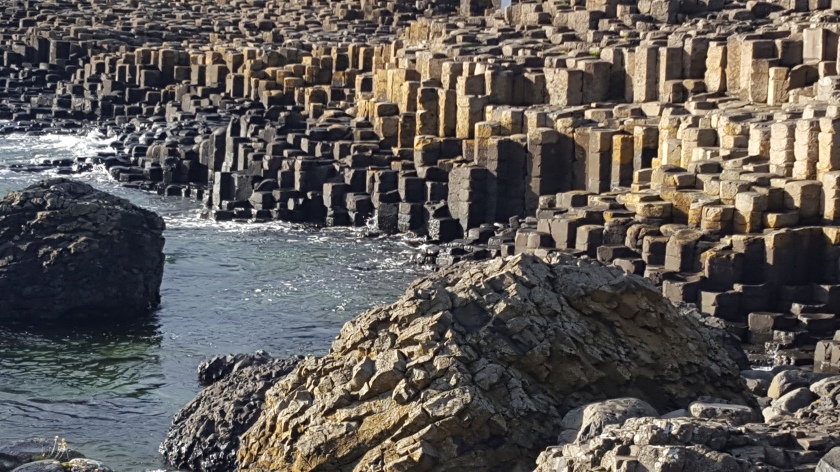 Together with six of our friends we had a brilliant day doing a 9 mile coastal trek between Northern Ireland’s UNESCO Giant’s Causeway and the Carrick-a-Rede rope bridge. 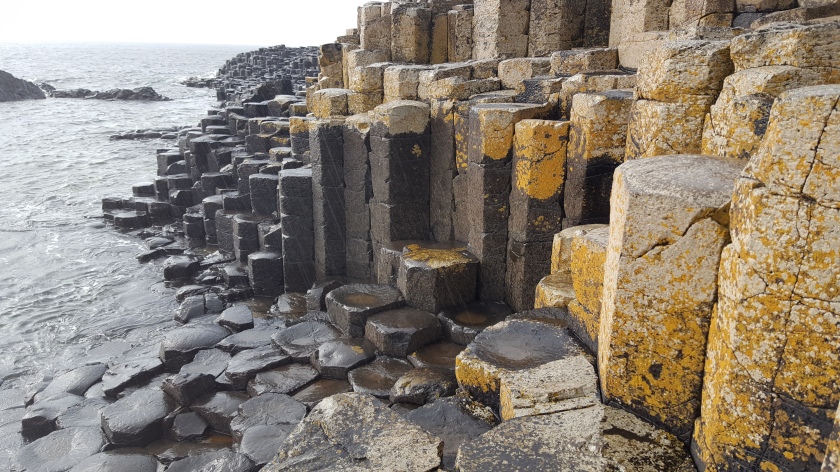 Neatly described by Wikipedia, the Giants Causeway is “An area of about 40,000 interlocking basalt columns, the result of an ancient volcanic eruption”. The columns are wedged together and form stepping stones with flat tops which make it easy to walk over (although they are slippery when wet).

The tallest columns are 12 metres high and most are hexagonal, although we were surprised to find that some also have four, five, seven or eight sides. 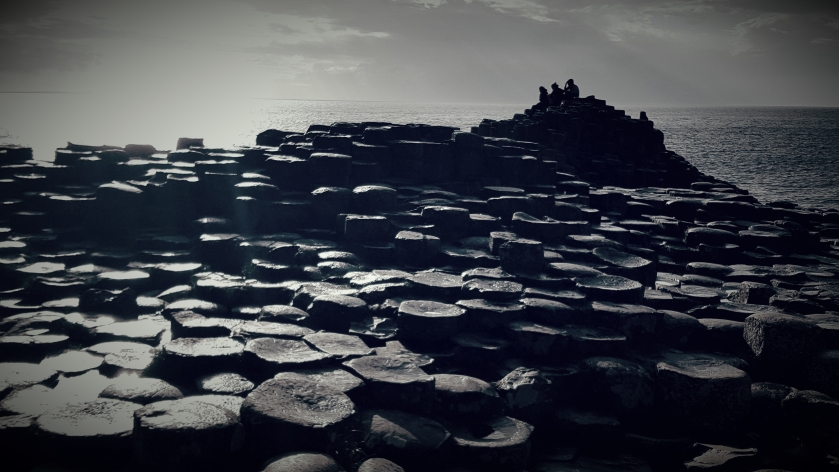 Many legends surround the Giants Causeway… one involves the story of Finn McCool, an Irish Giant and his Scottish rival giant, Bennandonner… A Folk Tales blog explains the full story but basically legend has it that the Giants Causeway was formed when Finn tried to create a walkway between Northern Ireland and Fingals Cave, on Staffa Island in Scotland (where, incidentally, we happened to visit only 4 weeks ago).

The scientific explanation is that the rocks were formed around 60 million years ago with volcanic activity and “sculpted into polygonal shapes by pressure…” Hmmm… I’ve not yet been able to find any exact explanation! I wonder if there is any geological relation to the hexagonal salt formations we saw in the Bolivian Salt Flats… 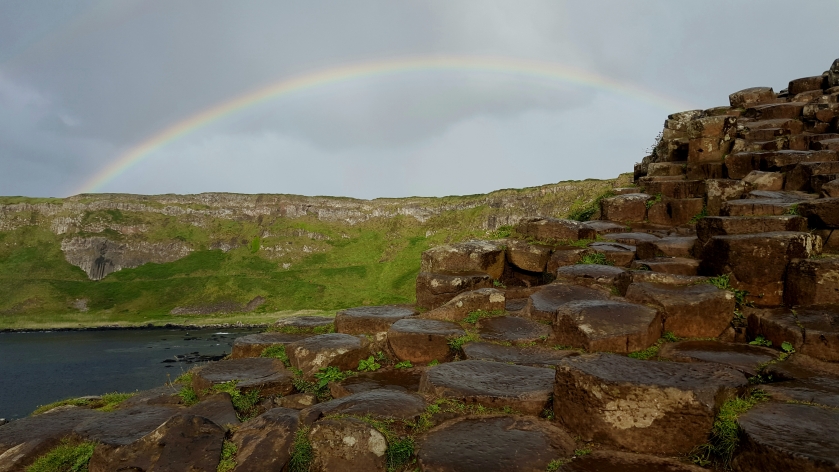 Anyway… back to the coastal trek…

We began by parking our rental cars at the Carrick-a-Rede car park at around 10:00 on a Sunday morning. Carrick-a-Rede is a tiny island which is linked to the mainland by a rope bridge. The original rope bridge was created over 350 years ago to enable fishermen to cross to and from the island.

Today the Carrick-a-Rede rope bridge is a major tourist attraction and as such attracts numerous coach parties every day. The entry cost is £7 each and once you have purchased your ticket you have to walk for about a mile along the top of the scenic coast until you reach the bridge. 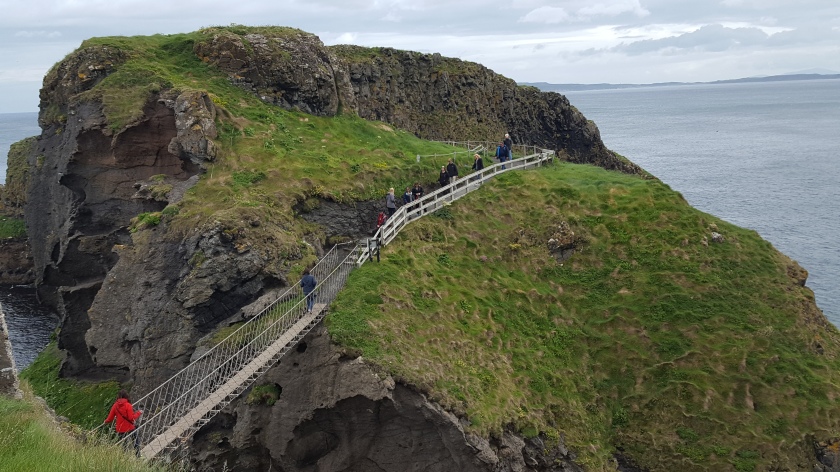 There isn’t much to see on the island which is home to hundreds of sea birds and pretty wild flowers. The top section was roped off for safety reasons so we literally spent about 5 minutes on the island before returning back across the rope bridge.

By now the crowds had arrived and quite a lengthy queue was forming at the entrance to the rope bridge.

From the rope bridge we walked the mile or so back towards the car park, had a quick pit stop in the coffee shop and walked to the bus stop, just outside the entrance to Carrick-a-Rede.

Buses were running along the coast road approximately every 20 minutes so we didn’t have to wait for long before getting the bus towards the Giants Causeway. The bus was around £3.50 each and stopped right at the Giants Causeway visitor centre entrance. 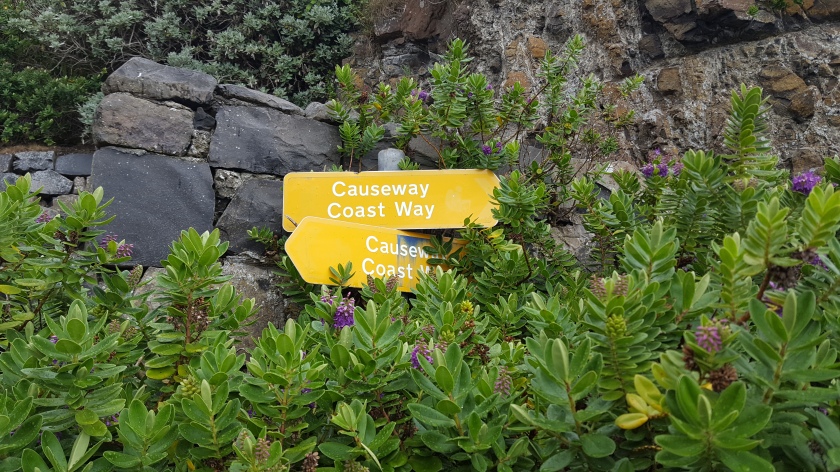 We had already visited the main site to see the famous rock formations of the Giants Causeway during the previous evening (which was where we took all of the photos at the top of this post, capturing the soft evening light on the hexagonal rocks), so today we headed straight for the coastal path. 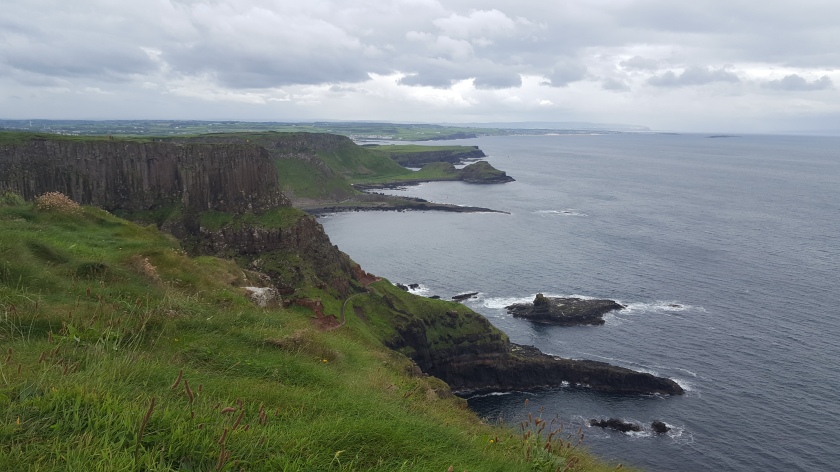 The coastal path we took is more or less sections 4 and 5 of the 33 mile Causeway Coast Way which follows the north coast of Northern Ireland from Portstewart to Ballycastle. We followed the grassy path around the edge of the coastline, walking back towards the cars at Carrick-a-Rede.

Soon after the Giants Causeway as we followed the breathtaking coastline we came to the highest point of the walk at Hamilton’s Seat. This really is incredible scenery with a ‘wow’ factor at every turn.

We stopped for a scenic lunch overlooking the area of Hamilton’s Seat and continued on our way. By now we noticed there were very few people along the trail… most people stick to the rock formations of the Giant’s Causeway and sadly miss this wild and spectacular coastline.

We were fortunate to have escaped the rain until about 2 pm when we had a couple of downpours and all got drenched! Northern Ireland is beautiful and green but this comes at a rainy price! As with much of the UK, the weather is changeable throughout the summer so its best to be prepared! 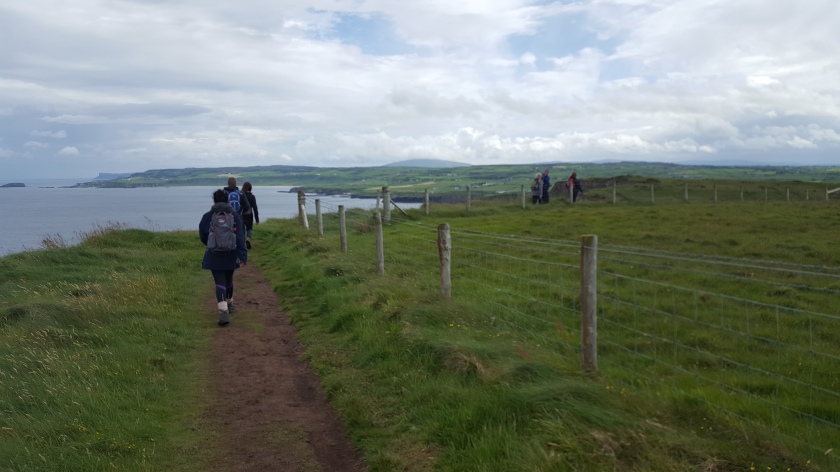 Most of the pathway is grassy and similar to the picture above. The soft undulations and mostly spongy easy terrain make for a pleasant and non-taxing walk.

As we left the towering and jagged cliffs behind the terrain levelled out and we walked closer to the sea. 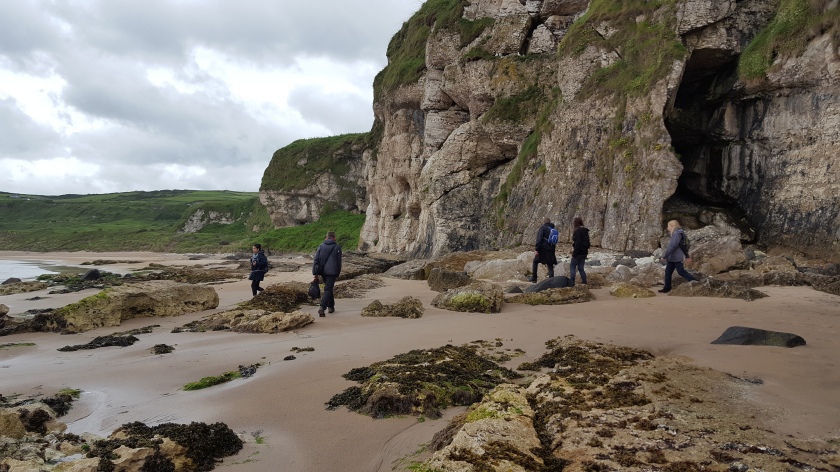 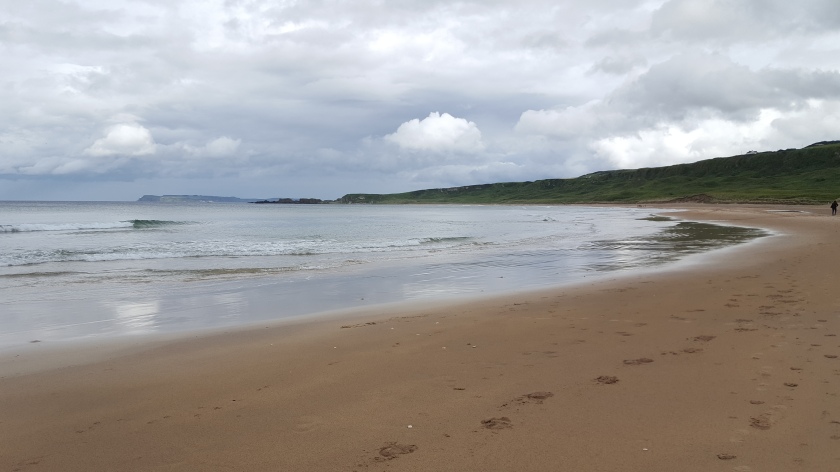 Just past the end of the beach we had more rocks to scramble round before reaching the small village of Ballintoy. From here it was a short pleasant grassy walk back to the cars at the Carrick-a-Rede car park. (And the sun was out by now… yay!)

The entire walk took under 5 hours including several stops. With the walk to and from the rope bridge and up to the bus stop we walked for a total of around 12 miles altogether. Despite getting a soaking this was one of the most enjoyable walks we’ve done thanks to the awesome scenery, easy terrain and great company!