Surrounded by crystal clear aqua marine sea Mauritius is a slice of paradise in the southern Indian Ocean. We were fortunate to spend 10 days exploring this enchanting island and this post covers some of our exploits.

Mauritius is part of the continent of Africa and is located 500 miles to the east of Madagascar. Together with several tiny islands, Mauritius is one of a group of three main islands, the other two being Reunion and Rodrigues.

Mauritius is famous for one of the worlds’ most well known extinct species, the Dodo. This  unfortunate bird was large, friendly and flightless and as such was an easy target for the Dutch settlers of the early 17th century. Within less than 100 years, they managed to kill off all of Mauritius’s Dodo’s rendering the species extinct.

The flight time from the UK is around 12 hours and we flew direct with British Airways as part of a BA package holiday.

With its high end hotels and tropical beach life Mauritius is a magnet for honeymooners. But there is more to Mauritius than stunning beaches, infinity pools and exotic cocktails…

We stayed on the north coast of Mauritius near Cape Malheureux. For our first full day we took a local express bus from nearby Grand Baie to Port Louis, the capital of Mauritius. The bus stopped in the main bus terminal next to a bustling market. It was raining when we arrived so we made our way through the market and found shelter in an outside but covered restaurant overlooking the sea.

After a tasty lunch of wine and samosas we had a walk around the town. Like many such island capital cities it was… OK… the city is located on a pleasant waterfront with a range of shops, hotels and restaurants. There are museums and gardens so you could spend a day here if you wish.

In the afternoon, from Port Louis we took another local bus to Pamplemousses to visit the giant water lilies of the botanical gardens. Getting there was straightforward albeit bumpy in the rickety 50 year old bus! The bus driver kindly told us when we needed to disembark from the bus too.

The botanical gardens are apparently the oldest botanical gardens in the southern hemisphere. While well established with many varieties of palm trees and with trees that had been planted by world leaders (including Mandela and Ghandi) they were un-commercialised and fairly quiet without too many tourists. We had a wander around for a couple of hours before getting the bus back to our hotel.

Another day we hired a taxi and driver for the day and set off to explore the west of the island. Above is a Mauritius phenomenon… Seven Coloured Earths! This is an interesting place where you can walk around wooden pathways and platforms and observe the distinct layers of different coloured sand.

Above is the Alexandra Falls, located in the Black River Gorges national park. With its abundance of endemic species of plants, birds and animals this became a protected park in 1994. There are several hiking trails through the national park and you may be lucky to see a pink pigeon here, a rare bird which is native to Mauritius.

We visited a hindu temple which was an interesting experience. The temple was set on a serene lake and with the smell of incense had a calming and spiritual feel to it. There were many colourful statues and also many monkeys scampering around.

Another day we decided to book a catamaran trip, also along to the west of the island. This was a fairly standard boat trip where we saw dolphins, had a barbecue on the boat and stopped at Ile Aux Bénitiers for an hour or so.

We were fortunate to see several dolphins swimming alongside as the boat zipped through the crystal clear sea.

Above is Crystal Rock, which the boat passed during our trip.

We enjoyed our day exploring the north west coast by catamaran however this really was a standard holiday boat trip. We shared the boat with about 50 other guests, had a tasty but average barbecue, stopped at an island full of stalls selling local handicrafts and saw some dolphins (which were being fed from the boat…)

One of the highlights of the trip was the day we did an under water sea walk! Together with a small group of fellow tourists a speed boat whisked us off a short distance out to a shallow area of the sea. After a short safety briefing, we donned our (heavy) helmets and lowered ourselves down the boat ladder and into the sea. This was slightly nerve-wracking… what if the oxygen supply (through a tube attached to the top of each helmet) suddenly stopped working? Once we were on the seabed and I realised we were only in about 12 feet of water I relaxed and enjoyed this incredible experience… 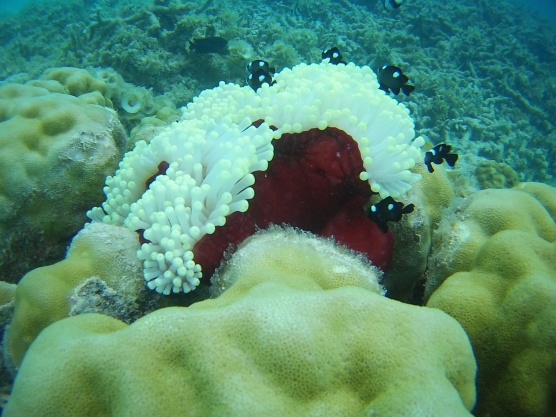 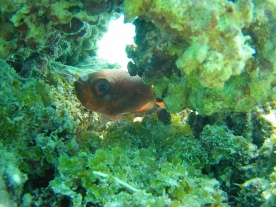 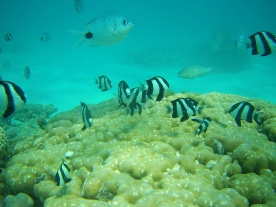 One of the best attractions of Mauritius is said to be a visit to Ile Aux Cerfs… we booked another taxi for another day and waited in eager anticipation. We had seen images of the fabulous beaches of Ile Aux Cerfs and heard about the hotel where you can enjoy a delicious lunch in this tropical dreamlike paradise… unfortunately this was our one day of torrential rain… our taxi still drove us to the place where we were to board the 10 minute ferry bound for the island but the rain was so torrential that all ferries were cancelled… we had no option but to return to our hotel (and still pay the driver £50 for his services…). We spent an hour or so in the afternoon walking around the coast a short distance to visit the Red Church below.

Thankfully the following day was much brighter… rather than forking out another £50 to attempt another visit to Ile Aux Cerfs, we decided to book a trip from a couple of locals with a small base just outside of our hotel near Cape Malheureux.

We paid around £15 each for the whole day, which included alcohol, lunch and a catamaran trip to three tiny islands off the coast of the north of Mauritius. The boat was about a third full of about 17 French tourists + three crew + us.

We set off in high spirits… literally as we were given some kind of alcoholic cocktail at 09:00 am… and one of the crew began to sing Bob Marley songs as he played his guitar… However as we were about halfway to the islands, one of the two engines cut out… apparently it was going to be too dangerous to venture through the narrow channels of the islands on just one engine. We were all disappointed as the catamaran turned back to our starting point.

Fortunately after a couple of hasty phone calls, the crew had arranged a replacement boat and quickly loaded all of the food, alcohol and tourists onto a speedboat! We were back on our way again!

The speedboat was much faster than the catamaran and within about 30 minutes we were approaching the first of the three islands.

We sailed past dazzling remote sandy beaches and sand banks and through the channel until the speedboat stopped. The crew began cooking the barbecue and we snorkelled in the gorgeous warm sea. Most of the guests sat around the table near the barbecue so Chris and I had the remote beach to ourselves.

We joined the others for lunch where all 17 of us sat around a large wooden table, under a wooden canopy and just off the beach. We were about to tuck into the delicious food when a bottle of red wine appeared in front of us… together with a range of beers and colourful looking cocktails (of some sort… they were served in plastic containers so we were not quite sure what they were…) by now everyone was in full enjoyment swing with more singing and guitar entertainment from the crew.

And this was how the day continued as we progressed to the other two islands… more snorkelling… more alcohol… and more merriment until we sailed back as the sun was setting. What a brilliant day!

We had an amazing time in Mauritius and would highly recommend a holiday there. We found that 10 days was just about right… enough time to explore some of the attractions of this lush emerald island but all in a relaxed and carefree manner.