Bogota is the huge sprawling capital of Colombia and our first South American destination. In contrast with Panama City’s rather conservative population of 8-900,000, Bogota’s is in excess of 8-9 million.

We had only 3 nights in Bogota as a short stopover en-route from Central America to Peru. We would love to explore much more of the northern part of South Ameria, particularly Ecuador, Colombia and Venezuela in the future but for this trip our focus is further south.

The flights from Panama City to Lima were expensive and we actually found the cost was lower to fly from Panama City (Copa Air) to Bogota, then fly separately from Bogota to Lima (Avianca) than to fly direct hence a ‘bonus’ trip to Bogota.

Colombia is another country with a turbulant past and has often been viewed as ‘the drug capital of the world’. Last year Colombia was the world’s largest producer of Cocaine.

Drug cartels began in the 1970’s but quickly turned into big business. By the 1980’s these industries were booming with Pablo Escobar controlling the Medellin Cartel and through this illegal trade becoming one of the richest men in the world.

The Colombian government launched a campaign against the cartels but this soon became war with the assassination and bombing of politicians, buildings and even a flight which was brought down killing all passengers.

Eventually things started to improve during the early 1990’s with the election of a new Liberal president and subsequent long negotiations. Escobar was killed in December 1993 although the war and drug trade continued.

Uribe, a right wing politician was elected in 2002 by a public who were seeking peace. Under his leadership, between 2002-2008 murder rates dropped by over 40%.

Colombia is now considered a safe country to visit and we felt as safe in Bogota as any other city. It was announced while we were there that the Colombian president, President Juan Manuel Santos won the Nobel Peace Prize 2016 for his efforts in the peace process.

Bogota is located in a valley surrounded by huge mountains and at 2640 meters above sea level is the 3rd highest capital of South America after La Paz (Bolivia) at 3650 m and Quito (Ecuador) at 2850 m.

Due to its elevation the temperature was around 15 degrees and grey and wet… hmmm…reminded us of home! Indeed other than the odd palm tree (not a common sight in England with the exception of perhaps the ‘English Riviera’ at Torquay) we felt the green scenery and general landscape was similar to areas of Scotland.

While in Bogota we spent one day exploring the city centre and for the other day we booked a driver from our hotel to take us to visit the ‘Salt Cathedral’, about an hours’ drive north of the city.

The highlight of our walk around the city centre was the Museo del Oro or Gold Museum. For an extremely low entrance fee of 3000 Colombian pesos (£0.83) the museum was modern and very well maintained. 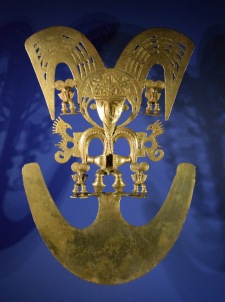 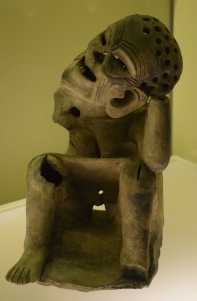 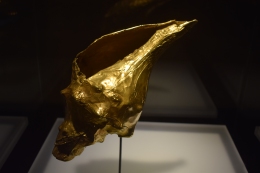 Above are pictures of some of the many exhibits of gold and metalwork from the pre-Colombian indigenous cultures. The museum holds the worlds largest collection of pre-Hispanic gold.

The museum is well worth a visit even if you are not usually a ‘museum person’. The coffee shop sells delicious Colombian coffee so is also worth a visit.

Upon leaving the museum and having read good reviews on La Candelabra, the ‘old’ quarter of Bogota we thought we would wander around the cobbled streets and look for quaint squares and old buildings. Unfortunately we found the area to be a little uninspiring although this was possibly because it was starting to drizzle with rain so it looked a little grey. 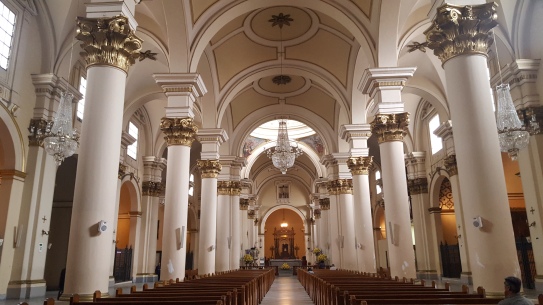 We looked in the Primate Cathedral (above) of Bolivar Square but decided against visiting another of the many museums in the immediate vicinity.

There is a great deal of street art in Bogota and you can even book yourself onto a graffiti tour!

Located 43 km outside of Bogota the ‘Cathedral de sal de Zipaquira‘ or Salt Cathedral is one of the top tourist sites of Colombia. In 2007 this attraction was voted the No. 1 Wonder of Colombia.

Through our hotel we hired a driver who took us there, waited for a couple of hours and drove us back to Bogota.

The Salt Cathedral is an underground church which was originally constructed in the 1930’s by salt miners who wanted a place of worship. In the 1950’s a project was completed to turn it into an underground cathedral. An even larger project began in the 1990’s and a new cathedral was built, 200 meters below the original one.

The cathedral is a ‘working’ cathedral holding regular small services and a larger weekly mass on a Sunday.

The sculptures are carved from the salt rock and are effectively illuminated with coloured lights which change colour as you watch. 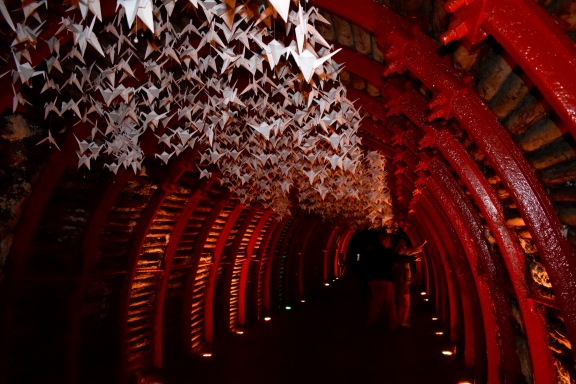 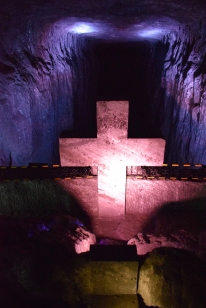 Above are some of the images we saw as we wandered through the Salt Cathedral.

We decided on a slightly more upmaket hotel for our Bogota city break and booked a room at the ‘Madisson Hotel and Luxury Suites‘. Our jaws dropped when we entered our suite… it was HUGE with 2 luxury bathrooms, 2 flatscreen Sony TV’s, a separate bedroom with a massive bed and lots of cupboards. And even a bathrobe and hairdryer! This, together with an excellent buffet breakfast each day made a pleasant change from some of the more basic accommodations we’ve stayed in!

It was a pleasure to sit in the large lounge of our suite, at a proper dining table and update the blog in comfort! The cost was an average of what we’ve spent on accommodation so far this year but Colombia is a less expensive country than others. For example the cost of two delicious Colombian coffees with two huge and equally delicious slices of carrot cake was only 20,000 Colombian pesos (£5.50) from the awesome little cafe (The Arion Panaderia) across the road from the hotel.

While we were a little underwhelmed by the centre of Bogota we enjoyed our visit and glimpse into the country’s history and culture and would definitely love to come back to Colombia. The Gold Museum and Salt Cathedral were impressive and both are well worth a visit.