Bocas del Toro is a group of Caribbean islands in the north of Panama, just across the border from Costa Rica. The capital is Bocas Town which is the main transit hub for people who wish to transfer on to some of the other islands. Bocas Town is located on Colón Island.

There is a small airport just outside of Bocas Town although most people arrive from the mainland of Panama by boat.

Panama currency is officially the Panamanian Balboa but US$ are widely used as the exchange rate between the Balboa and US$ is the same. In fact, we didn’t see any local currency at all during our time in Bocas del Toro.

The first morning was cloudy and overcast so we spent this exploring Bocas Town (although the above picture was taken on a brighter morning…). There was a distinct Caribbean feel with the colourful wooden shops and houses which reminded us of San Pedro, Belize.

The town is small and compact and you can easily walk around the entire town in about 20 minutes. There are numerous informal coffee shops and cafes most of which have a backpacker feel and also tend to be frequented by ex-pats. The usual array of tour operators and locals offering you trips and boat taxi’s also line the streets of the town.

The weather turned brighter at lunchtime and keen to start exploring the island we decided to hire bikes. These were $6 each and we cycled around the north of Isla Colón to Playa Bluff. The roads were quiet and almost empty with the exception of the odd quad bike flying past or trucks carrying building materials.

After about 25 minutes of cycling away from Bocas Town, it was time for pitstop number 1! The pirate themed Skully’s Bar was conveniently located right at the end of the tarmac stretch of road. Presently the restaurant is closed for refurbishment but having already had lunch we enjoyed a drink at the outside bar overlooking the small beach (above).

As mentioned immediately after Skully’s bar the tarmac ends and the road turns to gravel and sand. We cycled for another (bumpy) 20 minutes or so past a hotel and a few fairly isolated houses. 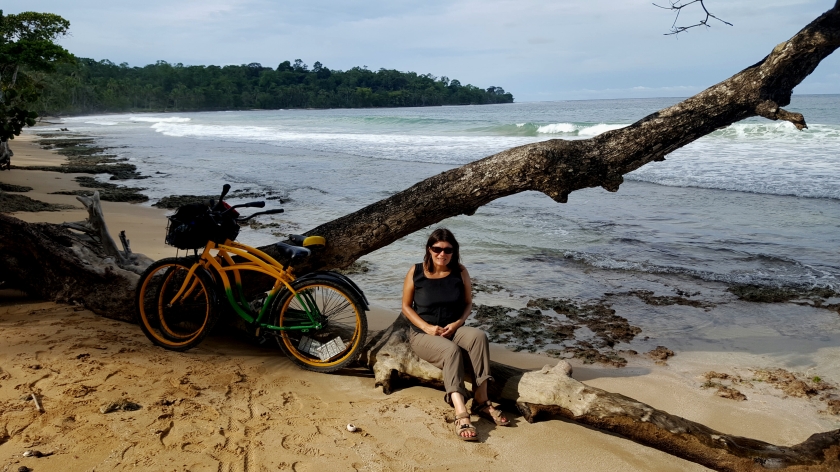 This is a fairly popular route for tourists to cycle, so while there are only a few vehicles there was also a small number of cyclists. There isn’t anywhere to go beyond the track so we cycled the full ride back to Bocas Town which took about 45 minutes.

For our second full day we took a water taxi for the 10 minute ride from Bocas Town across to Bastimentos Island which is home to ‘Red Frog Beach’.

We arrived at a small wooden jetty where we had to pay an environment fee of $5 each. From there we walked through the mangroves and rainforest for about 10 minutes to arrive at ‘Red Frog Beach’ which is on the other side of the island.

Red Frog Beach is named after the Red Poison Dart Frog (as above) as these live amongst the swamps and mangroves of Bastimentos Island, close to the beach. We walked slowly through the rainforest trying to spot one of these frogs but unfortunately we didn’t see any! (The photograph was taken from http://www.facts-about.info/poison-dart-frog/).

As we emerged from the rainforest track we were greeted with a gorgeous beach with vast areas of perfect soft sand together with the Caribbean sea clear, sparkling and blue. There was only a handful of people mostly lounging on the beach soaking up the sun.

Once we started to walk along the beach we noticed a small number of wooden buildings tucked away in the trees which enabled the beach to retain its tropical ‘away from it all’ feel.

We were drawn to the Palmar Tent Lodge Resort a small eco-resort where guests sleep in tents and are able to participate in activities including yoga, hiking and relaxing in hammocks. Solar power is used for energy and rain water is used for showers.

We began with just a drink but, after a short walk to the end of the beach we went back again for lunch. Lunch was delicious, fresh, plentiful and is highly recommended.

Neither of us are keen on lounging in a hammock or lying in the sun. However as an eco-resort one activity available at the Palmar Lodge is beach cleaning where a bag of rubbish equals a free beer!

We spent an hour or so combing the beach for rubbish that had been washed up on the shore… not just for the free beer but because it seemed like a worthwhile thing to do. And we only went for one bag of rubbish, not 6…

At first glance the beach looks pristine and beautiful however on closer look we were incensed by the amount of rubbish we collected from just 200 metres or so of beach. The majority of this was plastic… plastic wrappers; plastic bags; plastic cups; plastic bottle tops…

The animation ‘Man’ (by Steve Cutts) below speaks volumes and can be found on You Tube:

Why are we trashing our beautiful planet???

Here are some facts about the effect of pollution on animals (taken from www.conserve-energy-future.com):

Anyway… we shared the beer and left the eco-resort feeling that while our contribution this afternoon was miniscule at least half of the beach was now clean. That is until the next tide brings the next round of rubbish…

Still feeling annoyed at the huge amounts of rubbish we know is floating around in our oceans and still feeling the need to pick up every piece of litter we saw we made our way back to the jetty to catch our water taxi. We still didn’t see any red frogs but instead took a video to record the sounds of the rainforest trek, as above.

Playa Estrella is located on the opposite side of Isla Colón. We caught a local bus from the central square of Bocas Town which was $2.50 each. It took about 30 minutes to drive through the centre of the island, along the twisty hilly roads and past banana plantations.

The bus stops where the road ends at Bocas Del Drago.

As soon as we arrived and left the bus we were offered a $1.50 each short boat trip round the corner of the island to Starfish beach. This was a bonus as we were anticipating a 20 minute walk to get there!

The boat dropped us off at the beach which was a narrow strip of sand lined with wooden restaurants, tables and chairs. 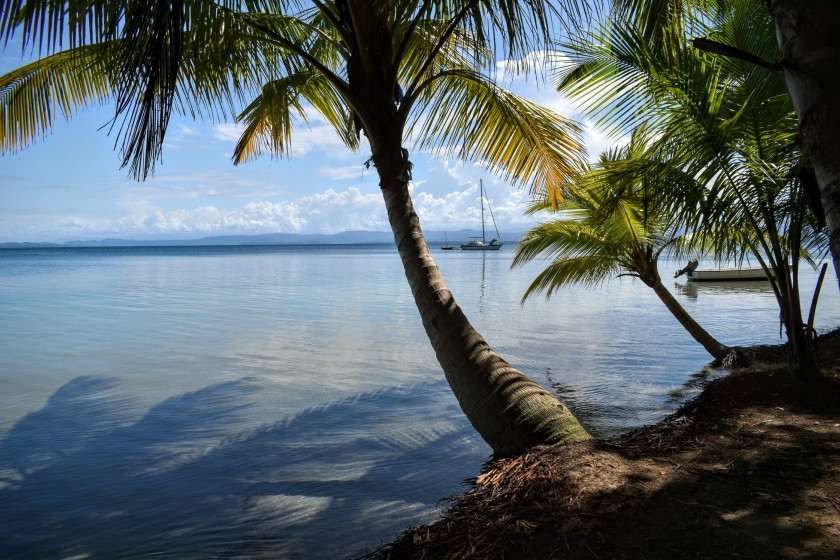 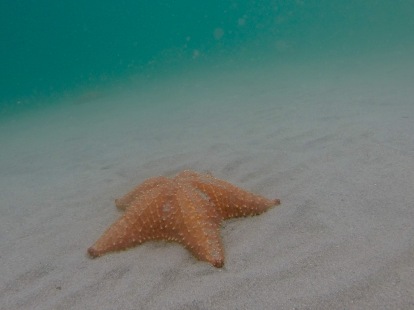 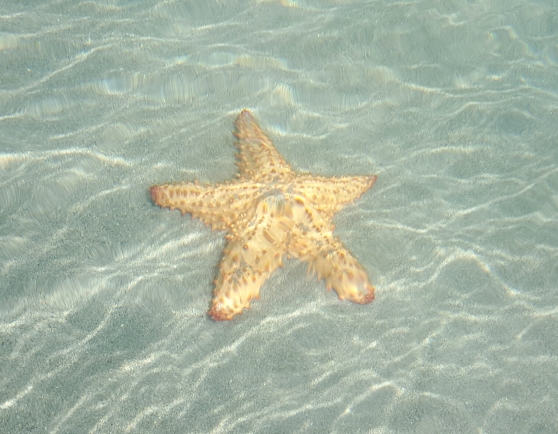 And we found some… yay! The orange and yellow starfish were dotted randomly in the sea, not really doing much. We had a snorkel and mask but didn’t actually need these as the starfish seemed to prefer the shallow water… we just had to be careful not to step on them!

Neither of us knew anything about starfish but a quick Google search tells us they are not actually fish but are marine invertebrates i.e. marine animals that have no spine.  For this reason scientists prefer to call them ‘sea stars’.

And, like the sloths we saw in Manuel Antonio last week, they also move very slowly as captured in the above video! 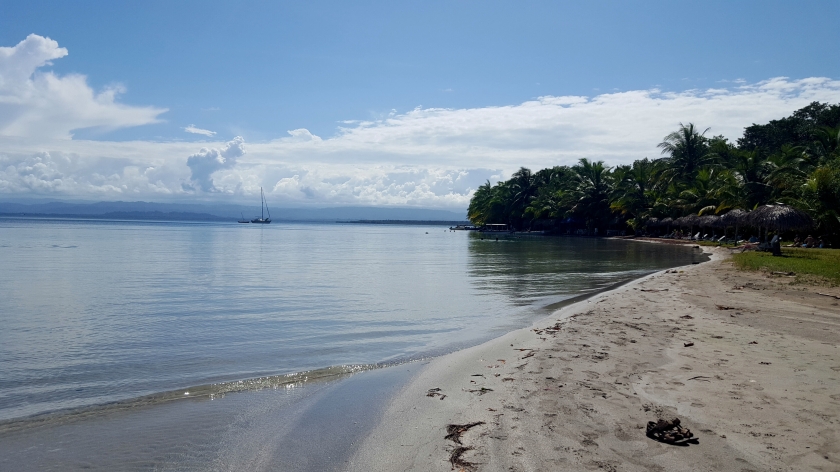 Following our little rendezvous with the starfish we walked to the end of the beach which turned into mangroves and prevented us from going any further.

Our boat taxi driver had agreed to pick us up at 2.45 pm to get the 3 pm bus back to Bocas Town. We duly set off in plenty of time back to the meeting spot but it got to 3 pm and he was nowhere to be seen… We’re not sure whether its because we are on a Caribbean island or whether it is a general thing but our experience so far of Panama people is that they are very laid back… If they agree to meet you at a certain time it doesn’t mean to say they will… this is also the case when you are in a cafe… you order something but you seem to be served as and when the cafe staff feel like it…

Oh well… rather than hang around and wait for another boat we decided to walk back to the bus stop. This was a great decision as the 20 minute walk was through the palm trees and mangroves and right next to the sea so was incredibly picturesque. (Although beware of the coconuts from above). 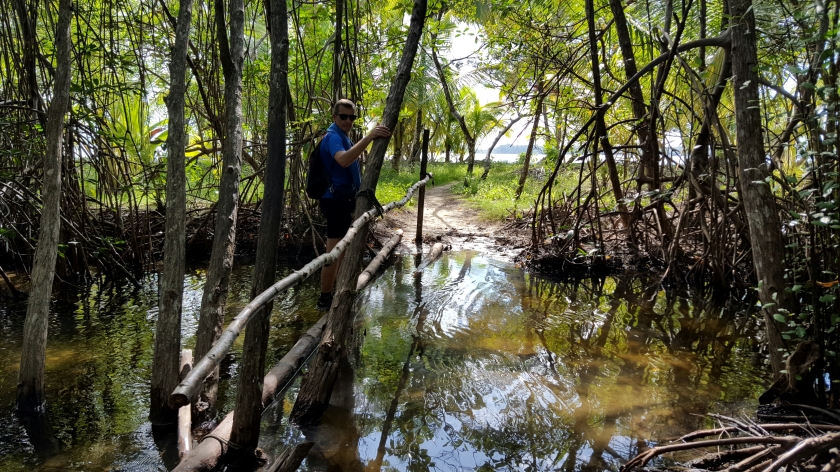 Just one obstacle with a makeshift bridge to cross as we made our way across the mangroves.

We ended our day with a delightful meal in the small restaurant next to the bus stop. Well… we did have 1.5 hours to kill while we waited for the next bus…

Where did we stay in Bocas Town?

We spent 4 nights staying in a Sun Haven apartment. Our top floor apartment was large enough to sleep 6 people and was fully equipped with a kitchen, large dining table and a separate bedroom. The apartments are located in a quiet spot of Bocas Town but as the town is small it is easy to walk to any of the bars and restaurants.

Getting to Bocas del Toro

We left San Jose promptly at 06:00 am having booked a transfer to Bocas del Toro with Caribe Shuttle. This was the easiest option we could find to take us into Panama and across to these tropical Caribbean islands.

The cost of $72 each included shuttle bus transfer, lunch at a beachside resort, a guide to assist with the border crossing, the shuttle bus in Panama and the boat across to the island.

The initial 5 hour transfer was in a brand new AC mini bus (and we were the only passengers for this part of the journey). We arrived at the Banana Azul resort which is on the Caribbean coast where we had lunch. From a good choice we had vegetable quesadillas with fries which although we had pre-ordered it was freshly cooked while we were there. We were able to relax and could even use the pool and showers during our 1.5 hour layover!

After lunch 4 more passengers joined us and our guide took us through the border crossing from Costa Rica and into Panama. This was one of the most complex of the recent Central American border crossings we’ve experienced… these were the steps:

We were thankful we had a guide to assist with this! We’ve had our hand’s held by the Intrepid guide for the recent crossings from Guatemala through to Costa Rica and it is most helpful to have someone point you in the right direction particularly for people like us who don’t yet speak Spanish.

From the border we were driven for another hour or so until we reached the boat transfer from the mainland to Bocas del Toro.

Overall we were highly impressed with Caribe Shuttle. The entire journey ran smoothly, the lunch was tasty, the drivers were good and we felt safe and we were properly assisted with clear instructions on how to approach the border crossing.