Cozumel is a Mexican island which basks in the Caribbean sun and sits opposite the holiday resort of Playa del Carmen. There are three ferry companies which run to and from Playa and Cozumel every 30 minutes to an hour throughout the day, each charging more or less the same price. We paid $300 pesos (just under £13) each for our return tickets with Ultramar.

We got the 09:00 am scheduled ferry from the Playa del Carmen ferry port which actually departed at around 09:10 to arrive in Cozumel 35 minutes later. The ferries hold around 450 people, have an outside deck with a canopy and an air-conditioned inside seating area with rows of soft comfortable seats.

When you arrive in San Miguel, the main town of Cozumel, you walk through a corridor of ticket booths with agents selling mainly either snorkel trips or car/moped hire. Most of the snorkel trips offer a similar format of a 2-3 hour boat trip which stops at 2 or 3 different snorkel sites on the reef.

The reef stretches down to Belize and is the second largest in the world, after the Great Barrier Reef. While we’re pretty sure this would offer amazing snorkelling in the crystal clear sea, we instead opted to hire a moped and explore the island.

While in Playa del Carmen the previous day, we were offered “a great deal” and told “you should book today otherwise they will all go…”. This pre-booked ‘great deal’ was a moped for $50 US (£38) + insurance for the day.

We had already done some online research and found a company called HTL with good reviews and were offering new mopeds at half this price. We happened to see an HTL representative eagerly waiting for the newly off-loaded ferry day-trippers.

He walked us the short distance back to his office and we were soon zooming off on our moped. We paid $450 pesos (under £20) which included insurance too! We don’t always get things right but one thing we have learned is that it sometimes doesn’t pay to book in advance…

We had decided to complete the 68 km round trip in an anti clockwise direction and drove south from San Miguel along the coast road. There are two parallel roads around the perimeter of most of the island, one for cars and one for bikes and mopeds. As we drove out of San Miguel the road and adjacent cycle path became quieter.

We were heading towards a well known bar called the Money Bar which has good reviews and is in a great setting. Unfortunately we missed the turning for this bar so we continued for several km until we found a resort called Paradise Beach.

We parked the moped in the resort carpark and had a drink in the pleasant outdoor bar which overlooked the pool. Some resorts (this one included) allow you to stay for a few hours to make use of their pools, restaurants and beaches for either a set fee or a minimum spend.

After the drink we had a look at the beach and walked along the jetty where we saw huge colourful fish swimming around underneath us.

We decided not to stay there and continued on our island circumnavigation. You can’t get lost as this is the only road around the island.

We were aiming for the lighthouse at Punta Sur in the north east of the island where we had been told you can snorkel from a nearby beach and see star fish in the sand below.

We hadn’t realised that the lighthouse was inside the Faro Celerain Eco Park which required an entrance fee of $14 US each but we duly paid it and set off through the gates and into the park.

The park is a slither of land between the sea and a lagoon. It has a number of features including the lighthouse which offers spectacular views, some small Mayan ruins and a crocodile spotting platform at the lagoon.

You can also participate in a guided mangrove tour although the timings for this didn’t quite fit our agenda for today!

The drive to the beach and bar area is 11 km along a track. The view of the coast along here is rugged and stunning. This side of the island has strong currents and big waves although as we drove towards the end of the track the waves reduced where the sea becomes more sheltered by the reef.

We parked with the other cars, beach buggies and mopeds at the end of the track, brought a drink and found a couple of loungers under an umbrella where we based ourselves for an hour or so, taking it in turn to snorkel in the sea. 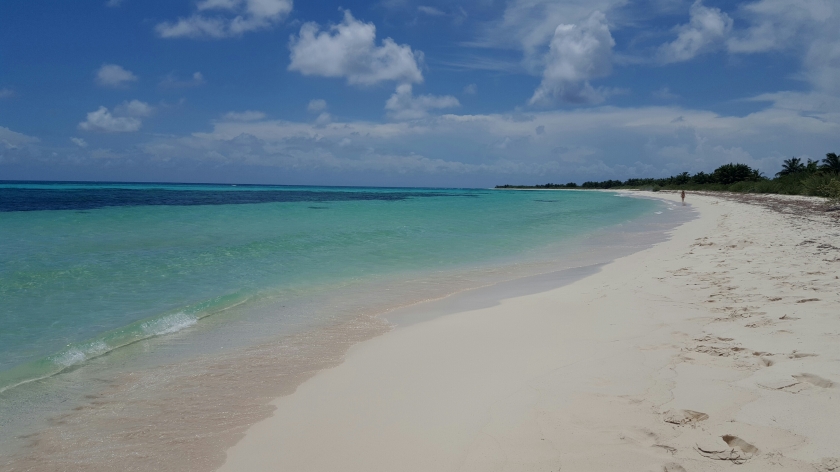 The snorkelling was a little disappointing… there were no starfish and no colourful tropical fish. In fact there were less fish here than at the Paradise Beach we visited earlier.

We shared a large plate of tasty nachos but by now it was 3 pm and we were not quite halfway around the island. It had also started to rain so while we sheltered for a bit before leaving the beach restaurant we decided we would just have to brave the rest of the warm tropical shower.

We set off back along the 11 km track, past the lighthouse (unfortunately with no time to visit) and out of the exit gates.

The rain had now stopped and our wet clothes soon dried as the breeze combined with the warm sun acted like a big tumble drier!

As mentioned the north coast of Cozumal is wild and rugged. There are a few beaches and also a number of blow holes which you can see from the road.

We continued driving, arrived in San Miguel, topped up the moped with fuel and returned it to the rental shop.

With a high accident rate renting a moped is sometimes considered dangerous and risky. This risk is reduced for us with Chris’s driver training and safe driving knowledge and several years’ motorbike experience from his younger years. It is important to ensure your travel insurance covers you for hire of mopeds, you wear crash helmets and you hire from a reputable company with third party or collision damage waiver.

The roads in Cozumal are quiet and of good quality so driving around the island was easy.

1. Get an early ferry i.e. 09:00 as it takes a day to drive comfortably around the island and stop several times.

2. If you don’t wish to hire a moped, many tourists hire beach buggies or cars.

3. Buying 2 x single ferry tickets rather than a return gives you more flexibility as you can choose to return with a different ferry operator which gives you more time options.

4. If you don’t wish to drive you could get a taxi to the Chankanaab Beach adventure park which is relatively close to San Miguel. The taxis are expensive, however.