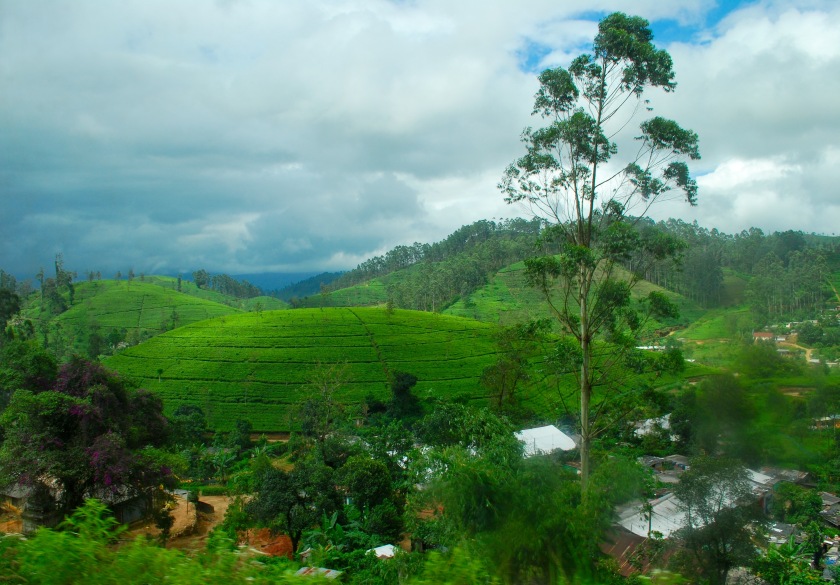 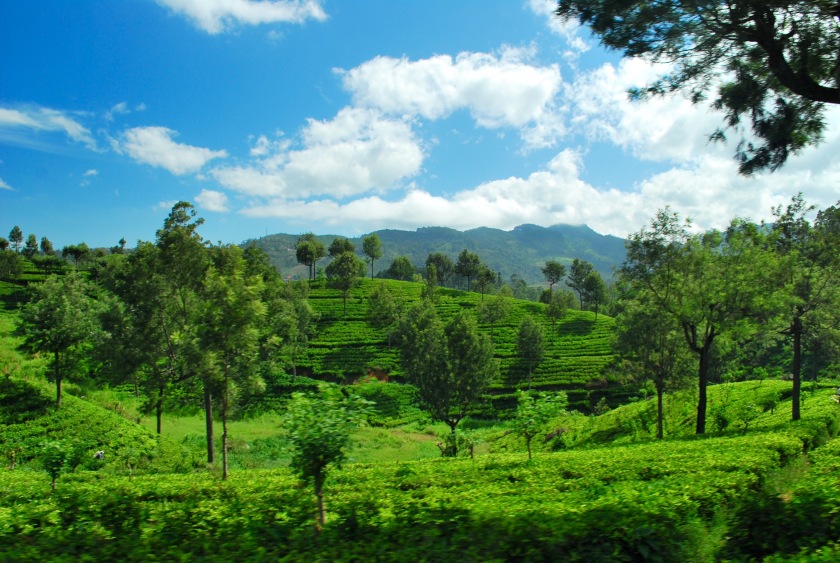 Sri Lanka is a tear shaped Indian Ocean island at the foot of India. Sri Lanka has two distinct weather patterns with the Yala monsoon occurring during May to September in the west and south and the Maha monsoon affecting the north and east from October to January. We visited at the end of May/beginning of June and circled the south west corner of the island so expected to get wet at some point!

From Negombo we hired a driver (which we seem to remember was around 9,000 Sri Lankan rupees (£42)) who drove us for 3 hours or so to the tea country, an incredibly lush and beautiful green region of the southern foot hills of Sri Lanka.

Sri Lanka is one of the biggest tea exporters in the world and the industry employs over 1 million people. Tea was introduced to Sri Lanka (then called Ceylon) in 1824 when a tea plant was brought over by the British from China.

Our three tea country locations were Kandy, Nuwara Eliya and Ella and from Kandy we travelled between each place by scenic railway.

We visited two tea factories; a small one just outside Kandy and the Blue Fields tea factory near Nuwara Eliya. Both gave us a tour of their respective factories; an explanation of the tea manufacturing process and different types and a cup of their delicious in-house tea. 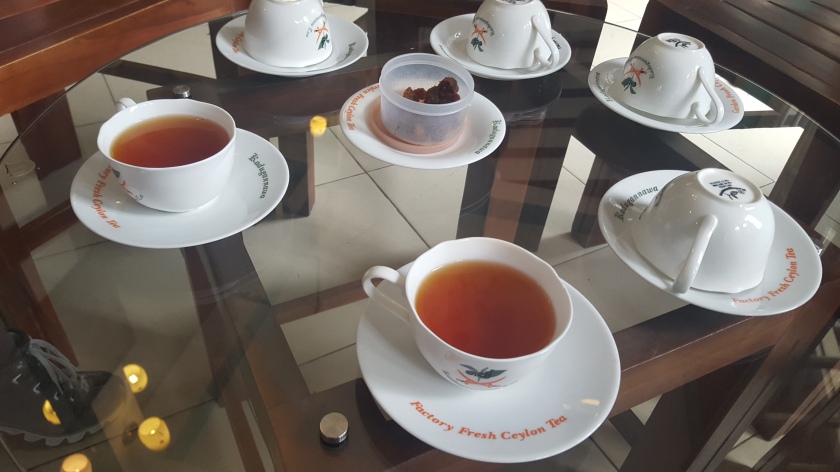 Since being in Sri Lanka we have learned to appreciate the difference between an excellent cup of tea compared with the cheaper ‘dust’ stuff we have at home! We have also discovered that good tea tastes so much better without milk.

At the Blue Fields tea factory (which was much larger of the two) we had a delicious Sri Lankan buffet lunch complete with traditional curries for less than £5 each.

Interesting tea facts: tea plants are harvested on a weekly basis; there are different grades of tea and tea called ‘silver tip and gold tip’ are the most expensive but the most delicious!

After a couple of weeks of hectic city life in Hong Kong then Tokyo we had three days of tranquility staying in the fabulous Cinnamon Citadel hotel. The hotel is in a quiet location just outside Kandy and on the banks of Mahaweli River, the longest river in Sri Lanka. Accommodation is inexpensive in Sri Lanka and we were able to stay here for only £40 per night for bed and an extensive and delicious breakfast buffet. 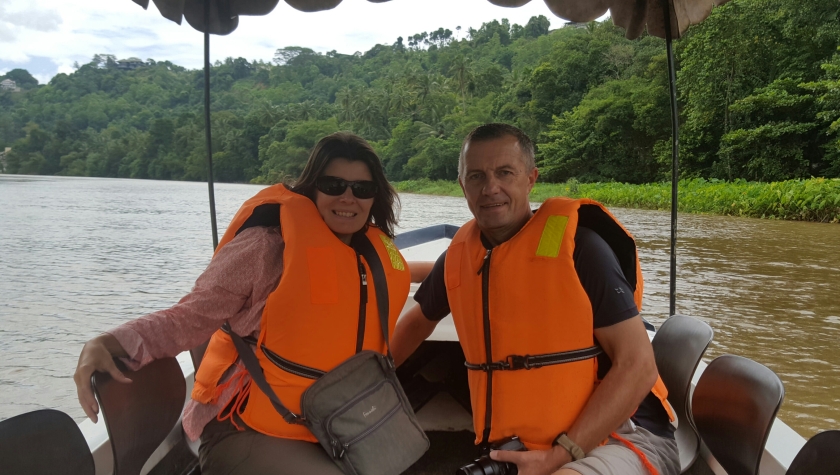 The hotel offered boat trips along the river where we saw large monitor lizards swimming in the water and basking on the rocks, a turtle floating along on a piece of bark and numerous birds including kingfishers and kites. We also saw women who had come from the villages higher on the river banks to wash their clothes in the river (which made us feel rather humble as we are staying only a short distance away in a luxury hotel where we are waited on hand and foot…).

We hired a tuk tuk into Kandy and spent some time wandering around the lake and getting a feel for Sri Lankan life. We chose not to visit the Temple of the Tooth partly because we were not properly dressed (Chris was wearing shorts and Laura’s shoulders were not covered) and partly because we’ve seen many temples throughout the last 4 months and we wanted Sri Lanka to be a change from being a sightseeing tick box jaunt! We are keen to see and absorb some of the stunning landscapes, wildlife and scenery this country has to offer.

Nuwara Eliya is known as ‘Little England’ for its colonial English buildings built when Sri Lanka (then Ceylon) was an English colony. Nuwara Eliya is also cold, wet and misty for much of the time, especially during the time we visited in the monsoon season. Thus another reason for its nickname!

We arrived at our homestay accommodation in the rain and mist which was located on a hill just outside the main town of Nuwara Eliya. We were taken to our room with a view but all we could see was the white swirling mist and no sign of any view! Throughout the two days we spent in Nuwara Eliya we wore coats for most of the time and were given hot water bottles at night by the kind and considerate folk of the House of Leisure homestay.

While in Nuwara Eliya we hired a driver and had a busy day doing the Horton Plains trek in the morning and visiting a tea factory and some waterfalls in the afternoon. May and June are the low season in Sri Lanka so finding a driver was never a problem.

After hearing about silver tips tea in the tea factories we sampled a cup in the Grand Hotel in in their gorgeous tea room. This tea was indeed something special and we now have slight reservations about going back home to Tetley or PG Tips!

‘Sleepy Ella’ as it is often referred to is indeed a small village to the south west of Nuwara Eliya. As we travelled along by train we noticed the increasingly warm temperatures floating in through the open train windows. It was lovely to arrive in Ella in the sunshine and in temperatures of around 25 degrees, rather than the cold and rain and 16 degrees we left behind! Unbelievably Ella is only around 50 km from Nuwara Eliya.

This time our accommodation was only a 3 minute drive from the station. We stayed in the ‘Freedom Guest House’ which happened to be literally next door to the AK Ristoro, the TripAdvisor best recommended restaurant in Ella! We had two excellent meals in there with drinks for around £20 for both of us each time.

While in Ella we trekked to the top of Ella Rock which will be featured in a separate blog post.