One of the most inspiring visits we made during our stay in Vientiane was to the COPE centre. COPE stands for Cooperative Orthotic and Prosthetic Enterprise and the visitor centre opened in 2008 to raise awareness and educate visitors of the ongoing devastation caused by unexploded ordinances (UXO) in Laos.

“Between 1964 and 1973 the US army dropped over two million tons of ordnance on Laos, making it the most heavily bombed country per capita in history. Of the more than 270 million sub-munitions, 80 million failed to explode. The nightmare continues to this day: one person is killed or injured almost everyday by unexploded ordinances (UXO) in Laos.” 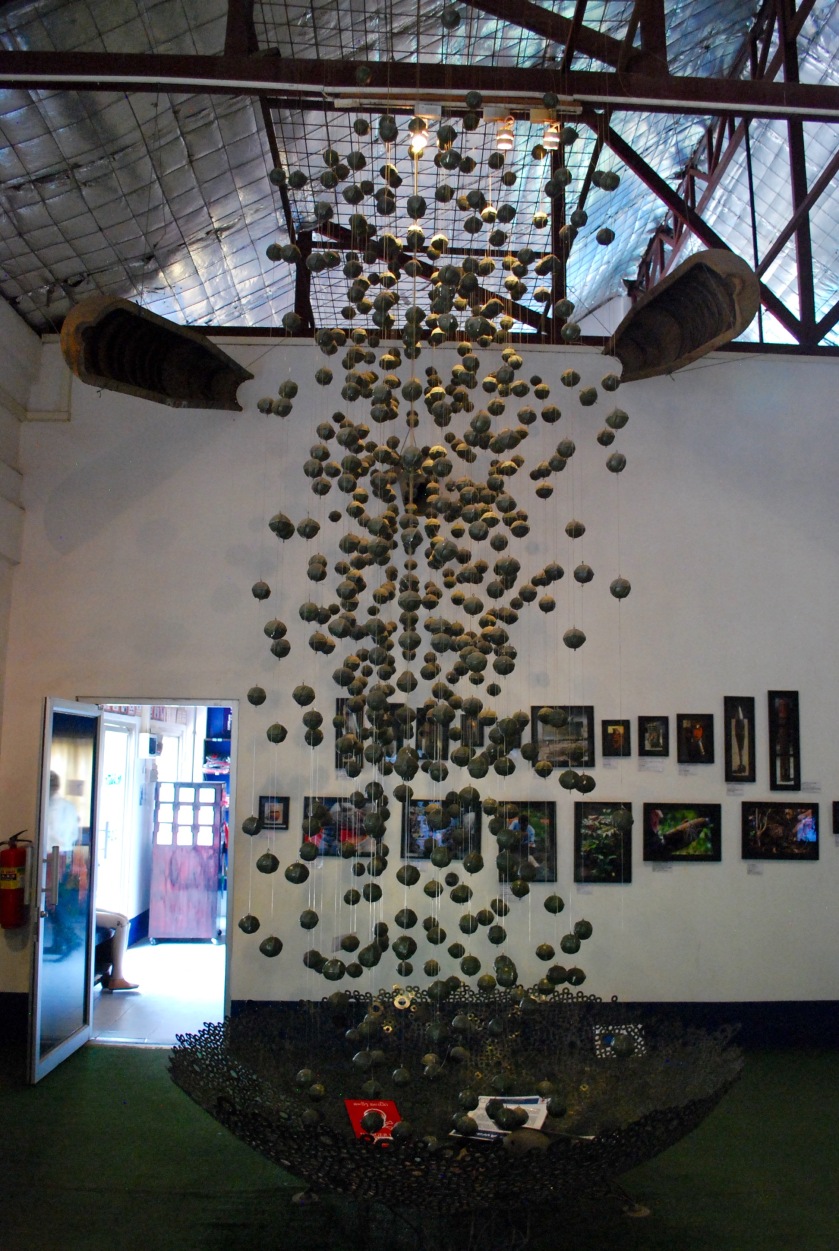 Above is a visitor centre replica of a cluster bomb designed to scatter the smaller explosive submunitions over a wide area. One case such as this would have contained enough submunitions to cover an area the size of 3 football fields. Despite the Geneva Accord signed by 14 nations in 1962 stating “Laos is neutral and is not to have any foreign military presence” the US bombed Laos during the Vietnam war in a bid to destroy the Ho Chi Minh trail.

The legacy of those 1960’s campaigns continues to this day. As a nation of rural farmers they suffered immensely while the bombing was happening, losing members of their families and their homes and livelihoods. However traditionally rural farmers have collected materials from the forests to build their homes and make tools and equipment. Since the 60’s they have found and used war remnants. Above is a sticky rice cooker made from parachute flare castings.

Still today there is money to be made from the scrap metal trade in Laos but retrieving such materials is done at great risk.

A number of issues are therefore being tackled:

As well as those affected by the UXO’s COPE provides assistance to disabled Laotians who have disabilities for other reasons for example from vehicle accidents or diseases. There were many inspiring stories where people affected by disability have turned their lives around. For example a rural farmer who was blinded by a UXO and unable to continue his farming livelihood is now working as a masseur in Vientiane.

What we admired about the centre is that the exhibitions highlighted the issues in a sensitive yet factual and non-accusatory manner. There is no entrance fee but most visitors give a donation. We hope we can help to raise some further awareness, however small, from this blog.

We came away from COPE reflecting on the horrific impact of war in general and the long term effects of the innocent people such as the rural farmers throughout Laos from the 1960’s right through to today.