The Greek island of Rhodes is just off the Turkish coast and has been a popular holiday destination for many years.

We stayed near Lindos, a town located about 50 km south of Rhodes Town and the airport. With its charming narrow streets and whitewash buildings together with warm shallow sea and golden beaches, Lindos is a popular holiday resort with British and other European visitors. Holidaymakers relax and enjoy views of the acropolis from the many rooftop bars and terraces.

The acropolis is reached via a steep path which is located at the back of the village. The cobbled steps can be quite slippery although it only takes about 10 minutes to reach the hill top.

Entrance to the acropolis is 12 euros and you can pay by cash or card. 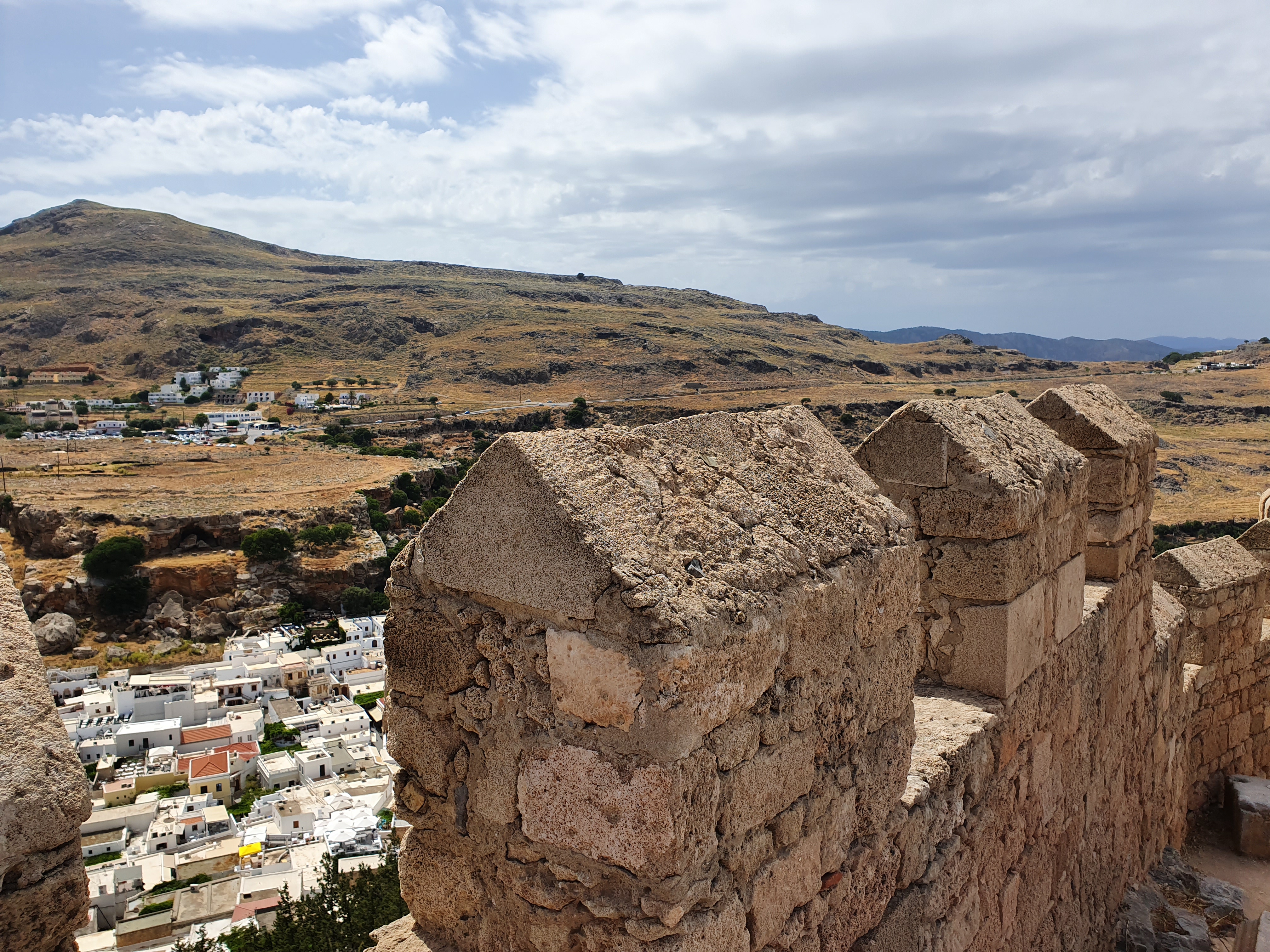 The beaches are lined with bars and restaurants and various boat trips are available.

Sadly donkeys are a big feature of Lindos where, like Santorini, the poor animals have to lug tourists up and down the narrow streets.

Pefkos is another resort near Lindos and also contains plenty of bars, restaurants and a sandy beach.

Pefkos is more ‘low key’ than Lindos which means the beaches are less busy and you can have more than a few inches of sand to yourself!

As mentioned we were staying a few miles outside of Lindos and Pefkos and reached both on two separate days (day 2 Lindos and day 3 Pefkos) by local bus.

We had spent the first day of our 4 nights at the Lindos Imperial Resort and Spa with the idea of ‘relaxing around the hotel’. Once the excitement and novelty of a large varied buffet breakfast followed by exploring the extensive grounds of the hotel had worn off we decided it was time to relax. We relaxed for about an hour, firstly sitting at the bar, then at the beach before becoming bored… both of us…

We went for a wander along the beach and treading carefully as we scrambled around the rocky headland we came across a snake! A beige coloured 30 cm long snake swimming near the rocks with its little head poking out until it slithered its way out of the sea and into a gap in the rocks! 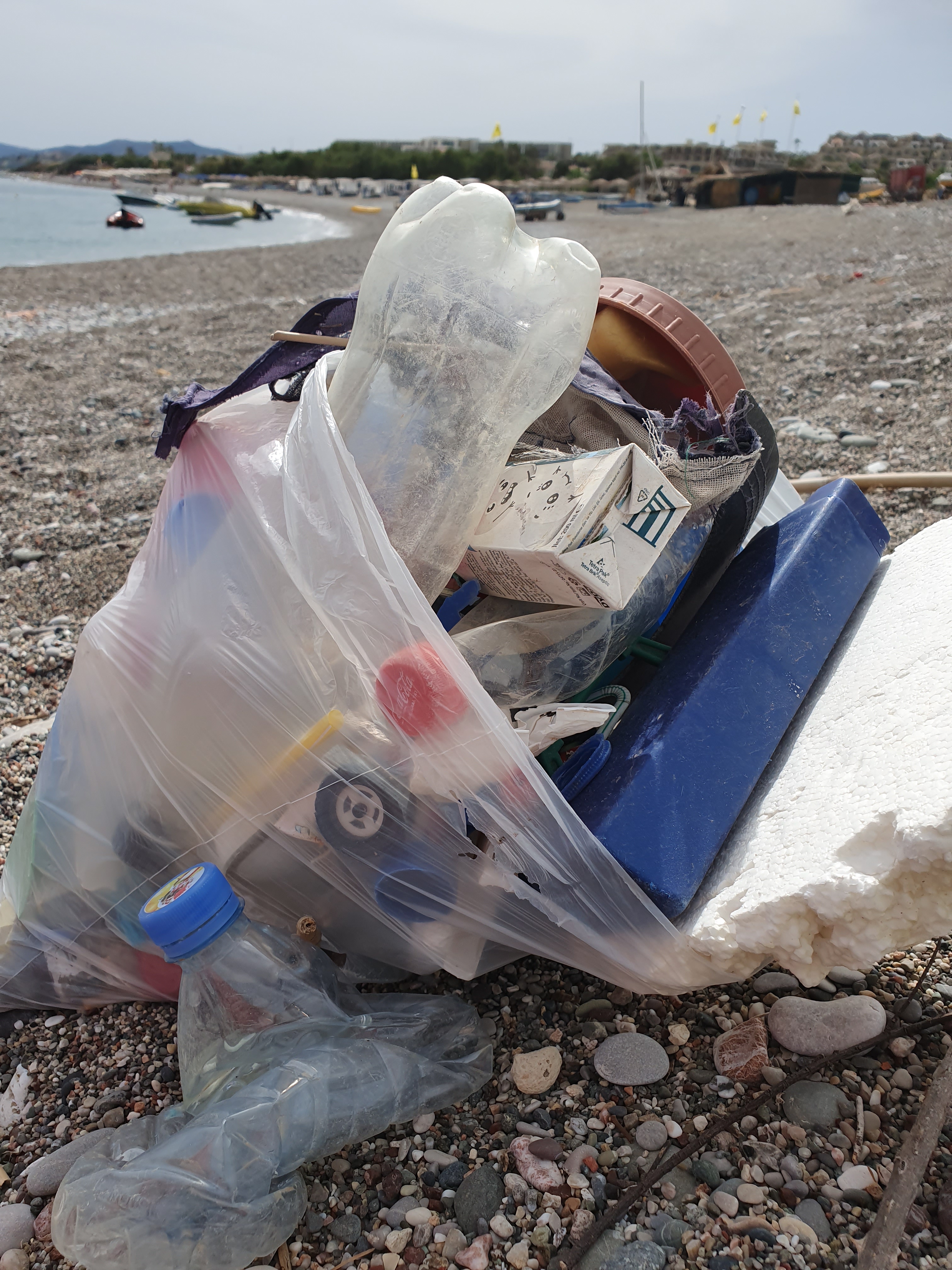 Unfortunately during our mini beach trek we came across a fair amount of rubbish… rather than grabbing a cocktail and joining the masses lounging on their sunbeds I grabbed a bag and set off beach cleaning… I’m not posting this to set myself up and preach as a do-gooder with a golden halo… just to raise a bit of awareness really.

If everyone picked up the odd bit of litter when they visit a beach, a real difference could be made to our environment and maybe a few less turtles or dolphins or birds would choke or suffocate.  It took no more than 15 mins to fill a small bin liner bag of crap… mostly bottle tops, and plastic bottles and 3 plastic shoes… all on a miniscule stretch of beach just west of Lindos…

And beach cleaning was actually more fun than lying on a sun bed!

As a hotel, the Lindos Imperial was great… we had half board meaning a decent buffet breakfast and excellent buffet meal each evening. We had a clean and spacious suite with a balcony in a quiet block overlooking one of several pools. There was a lot of families, a programme of entertainment and a gym, hairdresser and spa. You can get all inclusive too.

However, while maybe a good option for a traditional family beach holiday, 4 days in a large bustling hotel was enough for me! My preference would be a small traditional bed & breakfast with a handful of rooms and easy access to local tavernas in the evening.

Finally a small shout out to Holiday Taxis, an airport shuttle service. Easy to book the transfers online, the service was on time both for the arrival and return journey’s and in a comfortable modern mini bus. I would recommend to anyone visiting Rhodes!