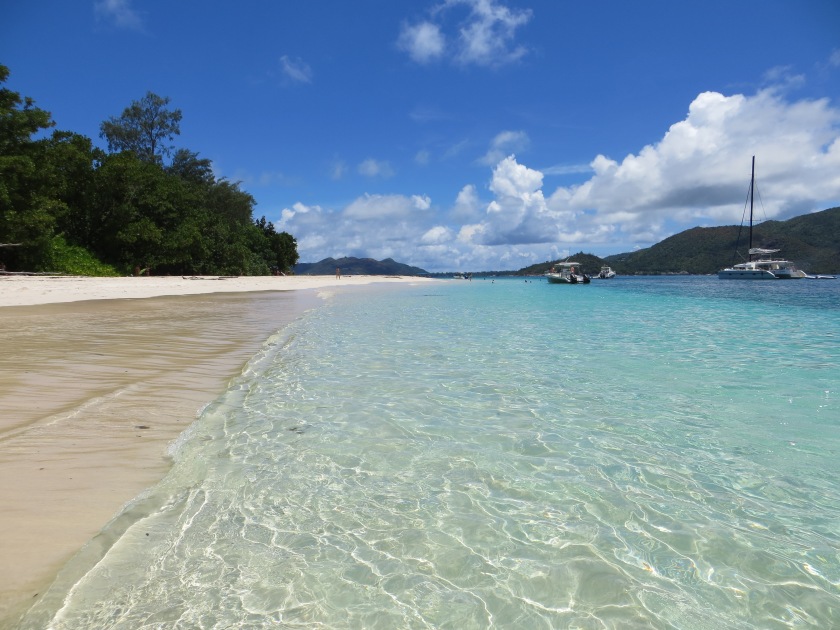 A short post with my opinions of the top 20 beach locations I have been fortunate to visit.

20. Captivatingly picturesque beaches along Australia’s north east coast but unfortunately in Feb 2016 it wasn’t possible to swim in the sea due to a rather unwelcoming combination of jellyfish and crocodiles!

19. Well, no prizes in picture quality for this old photo from Aug 2000, from my trusty old 35mm film camera but top marks for this exquisite beach! Rodney Bay is (or was…) lined with low key, laid back Caribbean bars. And for a bit of history and culture you can walk to the Fort at nearby Pigeon Island, where back in the day, the British kept a watchful eye on the nearby French island, Martinique.

18. Another Caribbean stunner is Crane Beach, Barbados. But as I visited as long ago as 1989 I googled and found the above picture from Google Images… Hmmm… it was wild, pristine and deserted nearly 30 years ago and then without a blue parasol in sight…

17. Back to more recent times… Chris and I participated in a beach cleaning activity at Red Frog beach doing our bit to leave it slightly more litter-free than when we arrived. This beach has a couple of eco accommodations and is a great out-of-the-way place to stay.

16. Usually at the higher end on the ‘scale-of-crowded-beaches’, with its vibrant beachside location, abundance of bars and restaurants and unique pulsating culture Rio is my favourite South American city. Rio is set against a backdrop of dramatic lush green mountains and offers a perfect combination of city and beach life.

15. A tiny bump of a sandbank just off the northern coast of the Dominican Republic and teeming with tropical fish, Paradise Island provides a great snorkelling opportunity.

14. A lovely (TripAdvisor top rated) hotel right on the equally lovely beach at Pantai Cenang, Langkawi, Malaysia. Langkawi is one of Malaysia’s northern-most islands right up there in the Andaman Sea next to Thailand. We spent 6 nights in Langkawi in Nov 2013 as part of a 2 week trip to Dubai, Singapore and Malaysia.

13. In a quiet corner of southern Jamaica, Sandals Whitehouse sits on pure white sands which fringe the warm Caribbean sea. Chris & I had our combined wedding and honeymoon (our ‘wedding-moon’) at this splendid beach resort so this beach does deserve a rightful place here!

12. The western Algarve beaches of Portugal are famous for their spectacular rock formations. However if you like windy, wild and remote beaches, then take a trip a little further round to the south west tip of Portugal. The above beach is just north of Cape St Vincent.

11. OK, a tad busy on this day but as Hawaii is choc-ful of fabulous beaches it didn’t seem right not to mention at least one as part of this post! Easily reached by local bus from Honolulu, Hanauma Bay is touristy but it’s also a marine conservation area. This picture was taken during our first visit to Hawaii in April 2012.

10. The dramatic cliffs and beaches of Cornwall are incredibly picturesque; walking part of England’s South West coast path which runs from Minehead to Poole would be an awesome thing to do one day…

9. Bora Bora contains the most unbelievably blue sea… the bluest sea we’ve seen anywhere in the world and is also lined with plenty of tropical palm fringed beaches. And expensive over-water bungalows if your budget would stretch that far!

8. So, another fave from French Polynesia, this time its Temae beach in Moorea. You can snorkel directly off the beach although be careful not to scrape yourself on the sharp coral just below the surface…

7. This is located on a remote part of Sardinia‘s east coast and reached by either boat or a lengthy hike. You can have a day of fun by hiring your own motorised dinghy to explore this dramatic coastline.

6. If you like to combine beach life with a little activity, a visit to Manuel Antonio national park in Costa Rica is suggested… you can hike in the national park rainforest and spot a wealth of wildlife between beach time… just near to this beach we saw a native sloth high up in a tree.

5. Located on the Pacific coast of Central America, El Cuco is a great surf beach in El Salvador and comes complete with fabulous sunsets! This is also a turtle conservation beach.

4. Bermuda is famous for it pink-tinged beaches. This beach would probably look more ‘pink’ with a better camera, but trust me, if you look closely this gorgeous beach contains billions of pink grains of sand!

3. Some of the most stunning beaches in the world can be found in the Philippines… this was the jaw dropping view as we approached one of many of the tiny islands off the north east coast from the Tapik Beach in the remote north east of Palawan.

2. Flat Island is one of a group of three tiny deserted islands which can be reached by boat from the North coast of Mauritius. The ability to swim and snorkel without any other people around adds to the wonderful memories of this little paradise.

Which are your favourite beaches? Please leave a comment, we would love to hear from you!